When writers and editors speak of “voice” in the context of fiction, they refer to stylistic qualities of attitude and personality an author employs to engage the reader, as conveyed through tone and word choice. A unique and powerful voice – think of Mattie Ross recounting her childhood travails in Charles Portis’ True Grit – can turn an otherwise mundane story into a riveting page-turner. A dull or flaccid voice, in contrast, can render even an international spy thriller into a soporific slog. 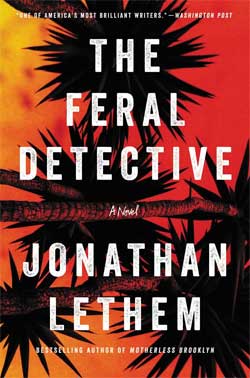 That brings us to Jonathan Lethem’s latest installment in an authorial oeuvre that includes The Fortress of Solitude, his 2003 New York Times bestseller, and Motherless Brooklyn, winner of the 1999 National Book Critics Circle Award, because with The Feral Detective, Lethem’s 11th novel, he demonstrates just how effectively a potent voice can combine with an engaging story to produce masterful fiction.

Phoebe Sigler is a fish out of water – a Manhattan-based writer, recently unemployed, on a personal mission to locate her best friend’s runaway daughter Arabella, last sighted somewhere amid the strip malls and scrubland of Southern California’s sprawling Inland Empire. Success for Phoebe will require a kind of cultural immersion for which she, though stubbornly game, is temperamentally ill-suited, a state of affairs underscored by Lethem’s revealing first-person prose in which Phoebe describes a City of Upland where “the malls and gas stations and chain restaurants took on the quality of a single repeated backdrop, such as Fred Flintstone would motor past” and where “to make an appointment here was to have dropped through the floor of your life, out of ordinary time. You weren’t meant to be here at all, if you were me.”

The appointment in question is with Charles Heist who, while not its narrator, is the novel’s titular protagonist. A self-described finder of lost persons, Heist is a laconic private detective, “fiftyish and cowboyish,” with a strip mall office and a trailer park home to which strays and runaways, not all of them human, seem to gravitate.

This, we soon learn, is no accident. Heist, you see, is a prodigal son of the desert – the firstborn child of a Mojave-based hippie commune since devolved into competing clans of nomadic survivalists. “The ones who dug in deeper and continued to drag the teepees around and hold meetings and share food around the circle came to be called the Rabbits,” Phoebe discovers. “The others, the ones who hewed off into the higher ranges, into the dark and wild, and who returned less and less frequently to the ceremonial fires to share what they’d found out there, were called the Bears.”

With Heist as her native guide, Phoebe enters this fraught netherworld in search of Arabella and, in a very real sense, in search of herself in a story Lethem describes as “a chase scene through the desert, interspersed with episodes of sex and violence.”

The novel is, rest assured, much more than that, thanks largely to Phoebe’s distinctive narration – a voice in turns sarcastic and acerbic and laced with bon mots and double entendres she sends zinging over the heads of her audience. Her antic chatter masks not only her fear and insecurity as the stranger in a very strange land, but also the disillusionment of an educated woman freshly unmoored by unemployment and by the 2016 presidential election – events that are not unrelated – making her sojourn into the Mojave a kind of personal rebirth and Heist a reluctant midwife to her new and wiser self.

The Feral Detective ($26.99, from Ecco) is one of the better crime novels I’ve read in recent years. Draw close, and lend it your ear.