Desert Rock goes back to the drawing board

Is the controversial Desert Rock power plant down for the count?

Its backers say no, but environmentalists are ecstatic over the recent announcement that the Environmental Protection Agency will take a hard second look at the air-pollution permit it had issued in 2008 for the proposed 1,500-megawatt coal-fired plant. The plant, a project of Sithe Global and the Diné Power Authority of the Navajo Nation, is supposed to be built on reservation land 25 miles south of Farmington, N.M., but it has been struggling against delays and opposition. 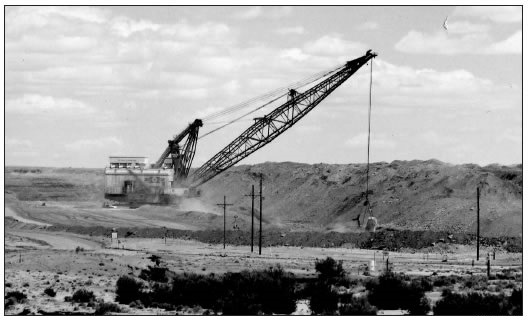 A drag line scrapes the earth at the BHP Navajo Coal Mine in New Mexico. Opponents of the proposed Desert Rock power plant, which would be located not far from this mine, say there is already too much coal-related activity and pollution in the region to justify a third coal-fired power plant. Photo by Gail Binkly

A coalition of environmental groups had appealed the EPA’s issuance of the air-pollution permit, and in April 2009 the EPA itself asked to be allowed to remand and reconsider the permit.

In a decision Sept. 24, the Environmental Appeals Board, a panel that hears appeals of decisions by the EPA, decided to grant the EPA’s request. The Desert Rock permitting is being handled by the EPA’s Region 9 office San Francisco, which has some jurisdiction over proposals within the Navajo Nation.

“This validates the concerns people have had throughout our communities about adding a third power plant in the region,” said Mike Eisenfeld, an organizer with the San Juan Citizens Alliance in New Mexico. “The EPA themselves wanted this permit back and wanted to redo it.”

Desert Rock, Diné Power Authority, and the American Coalition for Clean Coal Electricity had opposed the motion to remand the permit.

In its 83-page ruling, the appeals board found that the EPA had the right to ask to remand the permit and that the motion was not frivolous or made in bad faith.

The board said the EPA had valid concerns about issues with the permit, concerns shared by the appeals board.

An “overarching” concern, the board said, was the fact that the EPA had failed to consider making Desert Rock’s backers build a plant under a new technology called Integrated Gasification Combined Cycle (IGCC), which captures carbon-dioxide emissions before they enter the atmosphere.

“. . .the Region abused its discretion in declining to consider [IGCC] as a potential control technology” in its analysis of the facility, the board said in its ruling.

In all likelihood, Desert Rock’s carbon- dioxide emissions — expected to be 10 million to 12 million tons per year – will have to be taken into account, Eisenfeld said.

“The wild card is carbon dioxide. All indications are it’s soon going to be regulated as a pollutant under the Clean Air Act. You can’t just dismiss global warming in three paragraphs in your EIS.”

The EPA will also have to take a closer look at how Desert Rock’s emissions would add to the levels of mercury, ozone precursors and particulates in the air, Eisenfeld said. Desert Rock would be much cleaner than existing power plants in ther region, but would still release about 3,500 tons of sulfur dioxide, 3,500 tons of nitrogen oxide, and 120 pounds of mercury into the air.

“One of the issues we raised is the fact that we are on the cusp of being out of attainment [with federal standards] on ozone” in the Four Corners region, he said.

Mercury is also a special concern in the area. Numerous bodies of water around the region carry warnings about mercury-contaminated fish, including Totten and Narraguinnep reservoirs in Montezuma County and Vallecito Lake in La Plata County, and levels of airborne mercury detected at a monitor at Mesa Verde National Park are very high.

Furthermore, the EPA this time around will require endangeredspecies consultations that had been ignored by the project’s proponents during the first permitting process, Eisenfeld said.

Normally, the EPA would have required endangered-species consultations with the U.S. Fish and Wildlife Service, Eisenfeld said, but Sithe and DPA deferred that consultation, saying it was something the Bureau of Indian Affairs would do during its own permitting process for Desert Rock.

“But we said, ‘You have a distinct permit and have to do that yourselves’,” Eisenfeld said.

Endangered species in the region that could be affected by increased pollution from Desert Rock include the Colorado pikeminnow and razorback sucker, two types of warmwater fish, as well as the Southwestern willow flycatcher, a bird.

In its ruling, the appeals board said the Fish and Wildlife Service had informed EPA’s Region 9 that “its own analysis has led it to determine that mercury emissions may be adversely affecting the endangered Colorado pikeminnow, as well as contributing to numerous fish consumption advisories in the Four Corners area.”

Eisenfeld said the impacts to endangered species have broader implications.

“I don’t think it’s as important to focus just on the endangered species, but the fact that all these pollutants are going into the river systems and the food chain and our soils is indicative of something bigger,” he said. “This is one of about 50 issues these guys need to grapple with. I don’t think much thought was given to the permitting process. They thought it was just a formality.”

Eisenfeld said the appeal’s board’s ruling was highly significant. “This is an indication that we have a different EPA now that’s going to be looking at the science behind these proposals, and that’s what we’ve been asking for all along.”

Desert Rock has been touted by Navajo President Joe Shirley Jr. as a source of good jobs for the impoverished nation; it would provide an estimated 1,000 jobs during construction and 200 permanent jobs afterward. It has been opposed, however, by a broad coalition of environmental groups, including SJCA, EarthJustice, Environmental Defense Fund, Grand Canyon Trust, Natural Resources Defense Council, Sierra Club, and the grassroots Diné CARE, which has urged Navajo leaders to look to renewable energy for economic development.

Desert Rock would release much less pollution than the old, existing power plants in the vicinity – the Four Corners Power Plant on the Navajo Reservation, and the San Juan Generating Station near Waterflow, N.M. But Eisenfeld said it would exacerbate existing problems with air quality.

“We focused early on on the fact that Desert Rock is not being proposed in a vacuum. This area has a massive coal complex – three coal mines, two major, major coal-fired power plants, and significant water use coming out of the San Juan River for those projects. We said, ‘You can’t look at Desert Rock without contextualizing it with the other plants.’

“We said early on, during the scoping in 2004, that if Desert Rock were tied in with closing one of the existing facilities,” this could be a benefit, he said. “But to just throw a third plant out there is a fatal flaw.”

Eisenfeld also noted that none of the electricity generated by Desert Rock is slated to be used in the Four Corners. Instead, it will go to markets such as Phoenix, Tucson and Las Vegas. “I don’t think we should be depended upon to provide electricity for Tucson. They should require the large-scale power plants to be built closer to the market. I’m tired of us being treated like an energy-export zone with no evaluations of the consequences to us.”

Desert Rock still faces a plethora of hurdles, including numerous other permits it must obtain.

“The whole reason this permit was so important is because that was the one they needed to start marketing and get contracts for the power,” he said.

“I think this is a huge legal precedent for any plant that’s going to be proposed. They will have to look at the permitting process and the costs they are going to incur. Coal has become a very expensive way to produce electricity.”

Eisenfeld said he hopes this will push people in the region to look into renewable energy. “I hope leaders around here, be it Montezuma County or the Navajo Nation or the Farmington City Council ,will have a little different vision of what we can do.”