The Montezuma County commissioners lambaste the BLM for drilling delays

Public-lands agencies are impeding the effort to suck oil, natural gas, and carbon dioxide out of the ground, hampering local economic development and America’s quest for energy independence.

That was the message presented to Andrew Merritt, the state director for Sen. Wayne Allard’s office, by two Montezuma County commissioners and sseveral representatives of the energy industry on Aug. 15. 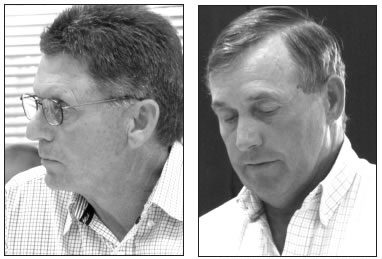 The special meeting, which included public-lands officials, offered a sometimes- heated discussion about balancing energy development against protection of cultural resources and the rights of private landowners against the government.

Commissioners Gerald Koppenhafer and Steve Chappell were particularly critical of management of Canyons of the Ancients National Monument, the sprawling 164,000-acre monument west of Cortez that was designated in 2000 by President Clinton. They said bureaucratic delays by the monument’s managing agency, the BLM, are creating obstacles to drilling and development, both within the monument and on nearby private land.

Since its designation, the monument has been operated without a resourcemanagement plan. The final environmental impact statement for the longawaited plan is due out in October.

“We’ve had this damn monument since 2001 or whenever, and we still don’t have a plan,” said Koppenhafer, the commission chair. “How the hell are you going to plan for a bunch of wells out there if you can’t get a plan?

“Everything everybody was worried about when they created this monument is coming true — locking gates to people’s private property, holding up drilling.”

The commissioners were also critical of the San Juan Public Lands Center, which manages local Forest Service lands and BLM lands not in the monument. The center is developing a new management plan for San Juan Public Lands after taking public input for about two years and writing for more than another year.

“This process of public meetings and public input is a farce,” Chappell said. “Everything people come and talk about is a farce. The agency’s going to go the way it wants to go and everything that’s said doesn’t mean a damn thing.

“Can we put it any plainer?” he asked Merritt.

Commissioner Larrie Rule was out of town for the special meeting.

“The monument’s proclamation was very clear that it was to be multipleuse, but we see new language added [to the plan] as far as protecting a ‘community’,” Chappell said. “We’re not clear what a community is.”

Monument Manager LouAnn Jacobson said the term had indeed raised concern. “There was disgreement within the archaeological community as to how to define that,” she said. “We have made some revisions and clarifications to the final EIS.”

However, the document had not been reviewed by the agency’s solicitor’s office, so she could not reveal how the “community” concept had been clarified.

She said the final EIS is set to go to the printer on Oct. 6.

“The county did submit comments [to the draft plan] and we responded, and that will be part of the document we produce,” Jacobson said.

The commissioners and energy-company executives voiced frustration about the length of time it takes it get approval for energy exploration or production on public lands, as well as to complete new agency resourcemanagement plans.

“I see agencies that can drill a well in 30 days, and I see a regulatory process that takes over three years and we don’t have a well site,” Chappell said. “I think it’s a shame when our government agencies are no more responsible to our elected officials than that.”

He noted that about 40 percent of Montezuma County’s property taxes come from oil and gas, mainly Kinder Morgan’s carbon-dioxide operations.

Merritt agreed that the process is too long. “Senator Allard has always been frustrated with the length of time and the resources the agencies have to put into these [management] plans.”

But Paul Matheny, vice president for Questar Energy’s Rockies region, said the BLM is not necessarily to blame.

“There’s a reason the process is so long,” Matheny said. “There’s all kinds of frivolous opposition that really puts the BLM in a terrible pickle.” He said conservation groups and individuals employ delaying tactics, and the agency has little recourse.

“The BLM is doing what they’ve got to do to keep from getting sued and having their documents overturned or invalidated,” Matheny said.

Jacobson said the BLM is not trying to stop energy development. “We did a fairly extensive socio-economic analysis as part of the EIS process, and we recognize the importance of oil and gas,” she said. “Our intent is not to stop oil and gas production in the monument.”

Kinder Morgan has 40 or 50 producing locations, she said, and new wells for Kinder Morgan and other companies have been approved within the monument since it was established.

Jacobson said monument officials do have concerns about a current proposal by Kinder Morgan to drill seven wells on Burro Point because of their proximity to 38 archaeological sites that are eligible for the National Register. “We have to figure out how to honor their existing rights and meet our responsibilities [to protect cultural sites] and balance tribal concerns, and each one of those is frankly in direct conflict with the others,” she said.

She said monument officials have been meeting with Kinder Morgan and with Questar to figure out the best locations for wells.

Ken Havens, director of source and transportation for Kinder Morgan in Houston, said company officials are frustrated by “the lack of a defined process” for obtaining approval to drill. Over the years, more and more information is being requested from the companies prior to drilling, he said, and more extensive cultural inventories are required.

“In the area west of the Dolores River, the restrictions on oil and gas are actually stricter than in the east where it’s Forest Service land,” Havens said.

He said another problem is that in the case of a split estate where a private individual owns the surface while the BLM owns the mineral rights, extensive environmental and archaeological surveys may be required and some landowners are resistant to having those done.

Chappell agreed. “They do not like the archaeologists coming on their private land. They may find one shard and the whole pipeline may have to detour 300 yards around [the site] and it destroys their crops and takes a chunk out of their field.”

“We would encourage them to get that inventory because it provides us a big picture of cultural resources in the area, but if the landowner is adamant, they can provide us documentation,” she said.

“This comes as news to about every operator in this room,” said Bob Clayton, Kinder Morgan production supervisor. “We were never informed that the landowner could deny that.”

Matt Janowiak, associate manager for physical resources with the San Juan Public Lands Center, said the agencies do want as much information as possible so they can follow requirements under federal laws that say cultural resources must be protected.

“The law requires that we do not approve undue degradation of any cultural resources,” Janowiak said. “We need information to make a decision. If the surface owner doesn’t want us to gather this information, it puts the brakes on the process. How can we sign a permit saying it could destroy cultural sites?”

“Never should you destroy a cultural site, but the law doesn’t say, because you don’t know [if resources are present], you will deny permits.”

Agency officials said the permits were more likely to be delayed than denied.

Jacobson said cultural resources belong to the surface owner and if an energy company ends up drilling in a cultural site on private land, it doesn’t have to do mitigation of the site.

“But they can’t destroy it,” Merritt said.

“Yes, they can,” Jacobson replied.

However, if human remains are found, the situation becomes more complicated and other laws are involved.

Duane Zavadil, vice president for government and regulatory affairs for Bill Barrett Corp., said in many cases, his company advises the landowner it’s better not to have a survey done.

He said 10 different BLM offices have 10 different ways of managing drilling. “If you don’t get some of this fixed you’re not going to get production from the federal lands like you should,” Zavadil said.

The public-lands officials said part of the problem is that management plans are written using the best available forecast for energy development at that time. “It’s really difficult to deal with the changing economies of oil and gas,” Janowiak said. “The trick is having a plan written with enough flexibility” so additional drilling can be allowed if petroleum prices jump.

Jacobson said she hopes the companies use directional drilling whenever possible, so “hopefully the 1600 new wells you’re talking about doesn’t mean 1600 new areas of disturbance.”