Ed Singer is an artist who renders contemporary reality on the Navajo reservation with a hard experiential lens on internal politics. It’s what he sees, hears, observes and knows firsthand.

“Even so,” he insists, “it’s not political art.” It is instead a reflection of his Native American point of view in Cameron, Ariz., where he is also president of his local Navajo Nation chapter. 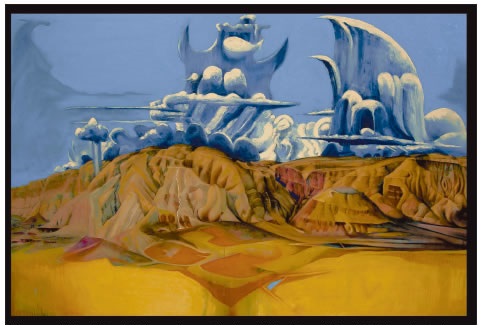 “Annunciation,” by Ed Singer, is on display at the Dessert Pearl Gallery in Cortez as part of his new exhibit.

Singer compares the current situation in the Navajo Nation central government to a painting by Francisco de Goya, “Saturn Devouring his Son,” in which he is eating his children at birth because he fears they will overthrow him. “Our council delegates voted in support of the local community- initiative structure that allows us to decide our own destiny, to develop projects that bring benefits for the first time to the communities in which they are emergent,” Singer said.

“But the reality is this: we are shut down instead, like our wind farm has been stalled by political parlaying behind the scenes to keep us out of direct financial benefit and out of the driver’s seat, even though the wind-farm site is on our land in our back yard and our personal family histories. It feels like the content in Goya’s painting.” As chapter president, Singer has been wrangling with the powers in Window Rock, site of the Navajo Nation central government, over the wind-farm resolution his community passed more than two years ago to contract with two outside companies to build a 500-megawatt project on the slopes of Gray Mountain in northern Arizona. The project remains in the planning stages, held at bay while shifting interests and outsiders, such as Citizens Energy CEO Joe Kennedy II of Boston, vie with Cameron’s community for development rights and fiscal control of the project.

Singer’s current body of work reflects his present life and the rebuff he and his community have experienced. “Navajo Crimes,” a mixed-media piece in his new exhibit at The Desert Pearl Gallery in Cortez, presents Joe Kennedy II in the foreground, dominating the Cameron wind-farm project. His caricature floats out of the text columns, headlines, masthead and photojournalism found in a newspaper format. He shakes his finger at the Cameron community, and at Singer, as he did at a meeting in December 2008, saying, “I do not come here lightly!” It is rendered in pencil, ink, oil washes, photocopies and a black-and-white label taken off a government surplus can of Chicken (Sin Hueso).

“The piece has been in my mind for a long time,” Singer said. “It is a parody because ‘Navajo Crimes’ rhymes with the newspaper ‘Navajo Times,’ where some of the topics are addressed — but not all of them, such as the condescending, insulting treatment of our community. It [the newspaper] happens to be the vehicle for the message. But the content of the piece shows the economic abuses being committed against the Navajo people by outsiders as well as our own central government.”

Desert Rock, the proposed coal-fired power plant that would be the fourth on the Navajo reservation is also on the front page above a photograph of a Navajo woman singing behind a chain-link fence, suggesting the familiar decay of people who remain spectators locked behind a circular pattern of “delay, waiting, abuse……….. cont’d” lettered into the banner at the bottom of the page.

The politics in Singer’s current work are an outgrowth of what is in front of him today, but he says his works are not intended as political statements. 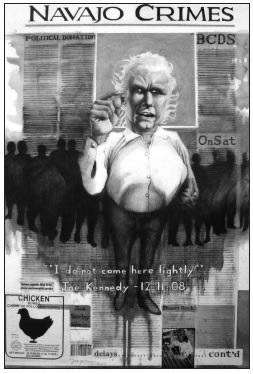 “Navajo Crimes,” a poster by Ed Singer, depicts Joseph Kennedy II, who is in a power struggle with the Cameron, Ariz., community where Singer lives.

“There is no way you can be a political painter if you are Native American in the USA today, especially in an age when there is such wholesale disregard for treaty obligations. I do not paint and draw political statements. Because I am an artist I react to my environment and the life around me. To me they are just paintings and drawings.”

Other works in the exhibit show his powerful return to the large oil paintings he was known for in the 1970s – 1990s. The latest canvas measures 7 by 5 1/2 feet. It is monumental in its museum scale and old masters glazing technique. The content is based on a comment he heard while interpreting during Navajo intake meetings held by the National Park Service. At that time many elders came to tell their stories about the Long Walk (see Free Press, September 2009) and to offer opinions on the proposed National Historic Trail designation commemorating the 1864 forced march relocating 10,000 Navajos to Bosque Redondo, Ft. Sumner, N.M..

“One old man told how his father said they walked home from the four-year incarceration ‘on a road of bones and hair.’” That statement has stuck with Singer since he heard it in 2006. The painting depicts the grim road, bones and hair partially buried in shadow beneath dark magenta earth. But above it he painted a trail of victorious people returning in a warm yellow landscape awash in sunlight. He began the painting six months ago while serving as artist-in-residence at the Aspen Guard Station. It is on view for the first time since its completion in Cortez.

Singer is also exhibiting “Annunciation,” a 10-by-6- foot portrait of Gray Mountain at the western edge of the Navajo reservation. It has been shipped from Phoenix to Cortez by the collector who wants it on public exhibit. Although Gray Mountain is a vast geological monocline, “the size of the painting,” said Singer, “is due primarily to the commission. It’s really the size the collector wanted.”

The great expanse of canvas gave Singer a chance to represent the same dynamic upheavals found in the rocky, serrated, severe mountain terrain that has been his family home for generations.

Initially he used a hose to spray water on the fresh paint, creating runs and drips incorporated in the final painting. Such a fluid state of medium can show through the following layers of built-up oil paint, offering the artist an opportunity to create obscure resolutions on the smaller land forms in the composition. Singer followed the metaphorical narrative in the cloud formations, too, showing another dynamic dialogue between the arching forces, the upheaval that brings rapid rains and windstorms in late summer and with them the bounty contained in the earth.

“The mountain is known to the Navajo people as a mountain of providence. I named it ‘Annunciation,’ in honor of the hope that another appearance of providence will initiate renewable- energy projects and benefits to the people in our community.”

Additional work in his exhibit includes caricature drawings of Navajo politicians and council delegates. Many are done in situ while he sits in meetings in Window Rock, a four-hour drive from his home.

“My work as an artist is similar to the interpreting I do. For a long time my community relied only on me to interpret English and Navajo for them. I have encouraged others to develop their own interpreting skills. It feels good now that a few have begun because a language, a culture, only stays alive as long as it’s used.

“I was fortunate to learn this traditional adult form of Navajo because it was what was before me when I was a child. It is the same with the paintings. I show what is before me, what is happening. I do not seek a political narrative. It’s just there when I pick up my pencil and paintbrush.”