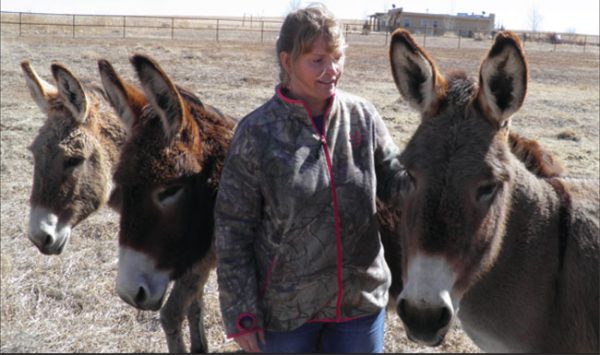 Floss Blackburn visits burros at the Denkai Animal Sanctuary in Yellow Jacket, Colo. They were part of a group of about 20 who had been turned loose on national-forest land near Pueblo and were found starving and near death. Denkai worked with Harmony Equine Center and Colorado Humane Society to take them in and place them. However, this group came back because the adopter had to retire and downsize. Denkai provides back-up for its equine/farm animals should a pitfall occur for adopters. Photo by Gail Binkly.

“We call them dumb animals, and so they are, for they cannot tell us how they feel, but they do not suffer less because they have no words.” — Anna Sewell

It started with a miniature horse.

“She was tiny, about 32 inches high,” recalled Floss Blackburn. “I was volunteering for another organization at the time. There was a woman who had paid $3500 for these miniature horses. She started talking to me. She said, ‘I can’t stand to look at her any more.’

The little horse had been so badly neglected that her hooves curled way up the backs of her legs. Blackburn, who has loved animals as long as she can remember, knew she had to do something.

“I took her in. I had her 10 years,” she recalled. “It took forever correcting her feet. We finally had to put her down. That’s what really kicked Denkai off.”

Denkai is a sanctuary for horses and farm animals, now located on a small farm in Yellow Jacket, Colo. The location is relatively new; Denkai originated on Colorado’s Front Range 14 years ago.

“We started with nothing,” said Blackburn, sitting at a table in the farmhouse at the Yellow Jacket property. “We rented places in the beginning. It was really hard.”

At one point she was living at a site in Nunn, in Weld County, without heat, running water or reliable electricity, taking care of a few abandoned and neglected farm animals.

“The animals did fine, but I paid a price big-time,” said Blackburn, who over the years has suffered serious health problems stemming from constant stress and hard work.

She struggled to expand her nonprofit, and eventually Denkai turned into a massive operation that included, in addition to the sanctuary for farm animals, a pet adoption clinic and a low-cost subsidized veterinary clinic.

“Our vet clinic performed about 25,000 procedures, the whole nine yards.

“We worked with municipalities – there were a lot of owner surrenders and cruelty cases. In total we’ve provided help to about 10,000 animals – equine, farm and pets. We also took in a lot of people who were homeless and needed help and had them working for the organization.”

Denkai was flourishing, but keeping it going took enormous effort.

At length the organization’s board decided to downsize, selling the vet clinic and adoption center in order to focus on large animals. The 640-acre site in Weld County was put up for sale as well.

“We were able to take funding from the sales of everything up north and buy this property outright,” Blackburn said. “We placed all the animals prior to closing it down. The farm part was the last to close.”

The decision to relocate to Montezuma County was natural, because Blackburn, the daughter of local author and historian Fred Blackburn, grew up here, graduating from Mancos High School.

On a brisk, windy day in February, Blackburn and Denkai’s outreach coordinator, Mary Fuller of Cortez, showed off the animals the sanctuary had taken in so far. They included llamas (surrendered by their owner), two horses acquired from Fresh Start Horse Rescue, goats, pot-bellied pigs (abandoned by their owner) from the animal shelter in Aztec, N.M., burros, and two horses of a small breed called Haflingers. The sixyear- old geldings, from a northern Colorado feedlot, are cases of neglect.

Denkai’s focus is large beasts – horses and farm animals – that have been abandoned or neglected, or rescued from “kill sales” – horse auctions where buyers want the animals for slaughter. Most auctioned horses these days wind up at slaughterhouses, Blackburn said. “Cruelty cases are our No. 1 priority,” Blackburn said. “We accept owner surrenders. Some people bring their animals to use with an endowment – that’s the best-case scenario.”

Denkai seeks to find new homes for most of the animals whenever possible, but only if the adopters pledge not to slaughter the creatures.

Although Denkai’s focus is on farm animals and equines, it is working alongside Soul Dog Rescue to provide financial support and placement for dogs from Towaoc, Colo. It is also working to set up a low-cost veterinary clinic in the Cortez area to aid low-income individuals with pets and to establish a resale store for donated items that will support the efforts of the organization.

Denkai is funded through grants, monetary donations, and various fundraisers. The sanctuary also accepts donations of vehicles and scrap metal.

“My whole life I’ve been dragging home animals,” Blackburn said, adding with a laugh, “It used to drive my dad crazy. It took years to figure out that’s who I am.

“I’m really good at it. I really enjoy it. It’s good to be who I am and to do what I do. I like to help people and animals.”