Fine lines: For the 2nd time, a federal judge rejects voting districts in San Juan County, Utah, as racially based

Once again, San Juan County, Utah, has been told to redraw its voting districts.

On July 14, U.S. District Court Judge Robert Shelby sent the county’s latest redistricting efforts back to the drawing board, dashing hopes that a resolution to the problem will be reached any time soon.

At issue in the current decision is whether the remedial plans submitted by the county redrawing the election-district boundaries for the county commission and the San Juan School Board have been racially gerrymandered.

The Navajo Nation filed suit in 2012, claiming the districts violated the Equal Protection Clause of the Fourteenth Amendment, the Fifteenth Amendment, and Section 2 of the Voting Rights Act.

In December 2015, Shelby found the school-board districts unconstitutional, and in February 2016, he ruled that the commission districts were as well.

He noted that although the county had adjusted the boundaries of its two white-majority districts, 1 and 2, in 2011, it did not change District 3, which is more than 90 percent Native American.

Shelby found both sets of districts unconstitutional under the Equal Protection Clause but did not address whether the districts violated Section 2 of the Voting Rights Act, saying at the time it was a moot point.

The court then outlined a process for adopting legally sound districts, directing the county and to submit remedial redistricting plans. If the county’s plans passed muster, the court would adopt them.

The Navajo Nation and the county each submitted competing plans for the school-board and county-commission districts, with supporting declarations by their respective experts. But Shelby now has rejected the county’s plans, saying the districts were unconstitutional.

“The court’s analysis here starts and ends with the Constitution,” Shelby wrote in the order. “The court concludes race was the predominant factor in the development of District 3 of the School Board plan and Districts 1 and 2 of the County Commission plan.” 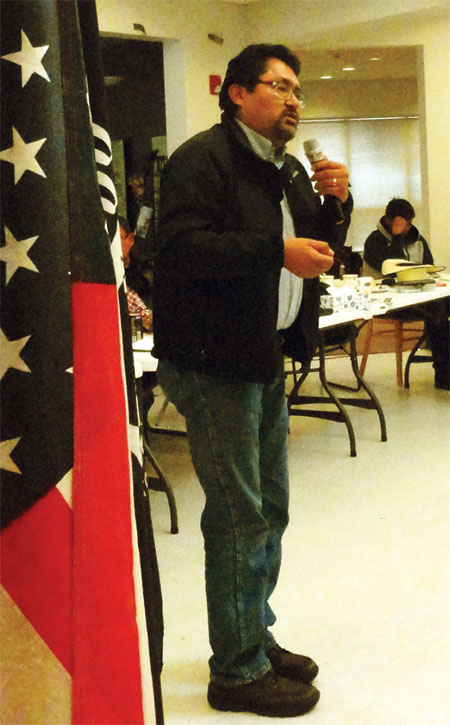 Leonard Gorman, director of the Navajo Nation Human Rights Commission, addresses a gathering in Monument Valley in January 2016 where he described the constitutionality of the Voting Rights Act, encouraging the people of the Navajo Nation to get registered in order to exercise their right to be represented. Photo by Sonja Horoshko.

The voting districts at the time were judged to be denying American Indians equal opportunity in the political process because the commissioners were elected at-large, meaning everyone in the county could vote in every commission race. Under that system, however, no Native Americans were ever able to gain seats on the county commission, as they then constituted a minority of the population.

Part of the consent decree involved a change to single-member districts, so that voters would choose only the commissioner for the district they live in.

The change succeeded in producing Native representation on the county commission. In 1986, the first Navajo was elected to represent District 3, which at that time was approximately 89 percent Native American.

The commission districts remained unchanged after the 1990 and 2000 censuses, and even initially after the 2010 census. Commissioner Rebecca Benally, a member of the Navajo Nation and resident of Montezuma Creek in San Juan County, represents District 3 today.

The 2010 Census found Native Americans to have a slight majority in the county. But no more than one Native commissioner has ever been elected to the three-member commission, and only two Native members sit on the five-member school board.

Concern over the situation prompted the Navajo Nation’s 2012 lawsuit.

The county had argued that its new maps tried to create fair, racially proportionate districts that reflect the county’s geographic distribution. But Shelby disagreed.

In the ruling, he said he would appoint a “special master” to tackle the redistricting and would hold a status conference with the parties to get their input.

Working out district boundaries in the county’s nearly 8,000 square-mile rugged landscape is a challenge, Shelby acknowledged in the order.

“Proportional representation presented a challenge in San Juan County, which is roughly half Native American and half White but with an odd number of voting districts—five for the School Board and three for the County Commission,” he wrote.

Likewise, he tried to create one safe white commissioner district, one safe Native American district, and a third district that was roughly equally split.

But Shelby was critical of the results.

He noted that County Commission District 1 included both Spanish Valley, a burgeoning upscale suburb south of Moab, and Navajo Mountain, a part of the Navajo Nation 4 1/2 hours and 250 miles away by car. The two areas have little in common yet were lumped into the same district.

In the school-board district map proposed by the county, District 3 was bizarrely shaped, wrapped around District 4 almost in a horseshoe.

Such factors led Shelby to the conclusion that race was the main factor in the formation of School Board District 3 and districts 1 and 2 of the county commission districts.

“The court further concludes the County’s race-based districting decisions were not narrowly tailored to meet a compelling government interest, and thus fail strict scrutiny. Because these districts are racially gerrymandered in violation of the Equal Protection Clause, the court will not adopt the County’s proposed plans,” Shelby wrote.

The San Juan School District used the new boundaries in the 2016 election, but the county commission districts were not used in that election.

When Shelby requested that the county redraw the district boundaries he also requested a remedial plan from the Navajo Nation, saying if the county plan was unworkable he might adopt the Navajo plan.

“Clearly, as my office has demonstrated in other voter-rights complaints, the Navajo Nation, New Mexico and Arizona have significant experience in redistricting, unlike San Juan County,” said Leonard Gorman, director of the Navajo Nation Human Rights Commission.

He told the Free Press he was confident that the Navajo plans the nation submitted to Shelby comply with the U.S. Voting Rights Act.

But Shelby reconsidered the option to adopt the Navajo plans. Drawing new election districts is best done legislatively rather than by the courts, Shelby wrote. The Navajo Nation is not an elected legislative body in Utah, he noted.

“Given the County’s demographics; its residents’ legitimate, competing, and important interests implicated by redistricting; and its complicated voting rights history, adopting the Navajo Nation’s proposed redistricting plans—the product of an adversarial, litigation-driven process—could jeopardize, and possibly undermine confidence in, the legitimacy of the county’s new legislative districts,” Shelby concluded.

Gorman was taken aback. “I thought the judge would be more independent. The decision characterizes the situation that exists in San Juan County where the amount of disagreement and the working relationship with the county is not prone to bring people together. Models for voter-rights decisions have been reaffirmed many times regardless of the conditions on the ground.”

Up to the master

Gorman told the Free Press he was pleased Shelby found that plans for both districts (school board and commission) were unconstitutional, “but I wish the decision had been more expeditious. There’s always concern that the Navajo people have been placed in an inappropriate position using the districts that obviously do not comply with the Voting Rights Act, 1965, for their San Juan County elections, such as the upcoming 2018, and the recent 2016 primary and the general.

“I have a difficult time understanding how the system allows usage of district plans that are unconstitutional. The sitting commissioners and school-board members won those seats in inappropriate election districts.”

Gorman said the Navajo Nation has assured the county it will be participating in the coming efforts.

“I hope our work will be used by the special master, and that the Navajo Nation is viewed as invested in the remedial plan. It’s not appropriate to go back to 2011. The Navajo plan is the only plan that should be on the table.”

The San Juan County commissioners did not reply to emailed requests for comment from the Free Press, but the Salt Lake Tribune received an emailed statement from a representative of the commissioners who was not named in the story.

“Quality education for all of the children in San Juan is a top priority,” the Tribune quoted the statement. “We are looking forward to finally resolving this issue. The judge’s ruling on Friday was what we asked for two years ago, him to appoint a unbias [sic] master overseer of the boundary re-drawing. This will allow for all members of the county to have equal say in this important project.”

The 2010 census numbers used for the redistricting plans found the county population to be 52 percent Native Americans and 48 percent non-Hispanic whites.

The special master must use the 2010 numbers, Gorman said, “like everyone else in the country. I hope we adopt a plan by the end of this calendar year. In the next census the 2010 numbers become obsolete, but we use them to assess the 2020 numbers when we sit down again after that census.”

Gail Binkly contributed to this report.