While out for a brisk walk — also known as my morning constitutional — I paused across from a flag that hung beside a neighborhood front door. It resembled an American flag, but this one fluttered grey, as if it had been rolled in a scuttle of cold ashes. I rubbed my eyes, thinking I’d suddenly gone colorblind, then noticed a single bright blue stripe on the field of grey. I scratched my head, convinced an appointment with an optometrist was long overdue. 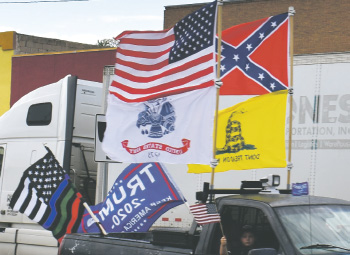 Instead of an exam I decided to search the internet and found that a fleet of freshly manufactured flags has become popular. These flags, labeled “thin line flags,” are available for purchase from many online sites, a product that transforms our stars and stripes into a declaration of preference instead of independence, like the blue stripe version which pledges an allegiance to the police. Other thin stripe color options vary, from green to purple, from silver to orange, and from red to yellow to black. Each color designates a separate allegiance tacked to a diminished field of what has uniformly been honored for over 200 years as the old red, white, and blue.

It’s worth noting the veracity of Betsy Ross’s role in designing the first Stars & Stripes has been questioned by historians, but the truth cannot be denied: she made flags for 50 years following the Revolution, garrison flags for the U.S. Arsenal and ship flags for the Pennsylvania Naval Fleet. Records of payment for flag-making exist. And she didn’t order them from China.

An apocryphal story about her involvement with our first flag describes a meeting with George Washington. He showed up at her house with a sketch for a flag, seeking an upholsterer who could stitch this new nation a durable emblem for its future. His sketch offered a circular pattern of 13-pointed stars, one for each of the colonies, all white and all unified on a field of blue. Ross demonstrated how it would be quicker for her to cut five-pointed stars and Washington saw the merits of her suggestion. Negotiations never flagged, and a deal was struck. America had its symbol of freedom.

Unfortunately, understanding our new “thin line flags” requires the viewer to interpret a convoluted color code. We can assume the online customer knows what his or her flag stands for when ordering it, but neighbors may be scratching their heads once it gets hoisted up the pole. For those like me who might be a little confused, I thought a color key might help:

A purple line personifies support for persons who died or suffered great injury while in political office due to violence.

See what I mean? You need a secret decoder ring to figure out what you’re saluting. I’ve omitted a few stripes, because my dictionary ran out of synonyms for “represents,” but the manufacturers have a vast palate of colors. Even more frustrating is that a customer can combine colors on the same flag by ordering shorter stripes crammed into a single line to express support for multiple organizations: the thin blue/red/ green line flag, for example. So much for an American flag that once sought to unify a nation. Now we can assemble our allegiances like a jigsaw puzzle.

The thin-stripe flag is really a marketing campaign hoisted up the flagpole, a Go- Fund-Me event for patriotism. Since I completed my research, the ads keep popping up, digital flags fluttering on every browser screen, which has made me wonder, what color, for instance, is the support stripe for America’s teachers? I hunted for one, perhaps a chalky white stripe with a cluster of gold stars for good behavior? I couldn’t find it. Four million Americans have dedicated their lives to this essential public service but they’re not trending.

And what about other worthy champions, like our nation’s investigative reporters or our honestly peaceful protesters, whose efforts fail to meet the prerequisites for earning their stripes on a murky field of grey?

You see, I think the problem with these new flags is simple: some of our nation’s heroes simply stand a little too far to the left of that thin line that seeks to divide us.