“How many people do you know that really like their telephone company?” asks Terry Hinds, manager of Farmers Telephone Company in Southwest Colorado. “We’re all about customer service. Our customers love us, and the reason they do is because we’re here – we’re local, you can come and talk to us.”

That is one thing that has not changed over the past century – the personal touch. Farmers Telephone Company was incorporated in 1920 and this year marks its 100th anniversary. Plans for a celebration for over 200 people, with free food, music by the Bar D Wranglers and Flashback, as well as games for the kids had to be put off because of the COVID-19 precautions. But the company is proud of its accomplishments and was hoping to share that success with their community during the anniversary party.

“Today, most telephone companies, when you call them you get India or Florida – you lose that personal touch,” Hinds explains. “We’re a small community. Everybody knows our board members, everybody knows us. We have a lot of customers who drop their bills off so they can come say hello.”

A hundred years ago the population of Dolores County was 1,243, while Montezuma County had 6,260 residents. Cortez had just over 500 citizens, and out in Pleasant View, where Farmers has its headquarters, everyone knew each other. There are no census numbers for the community. 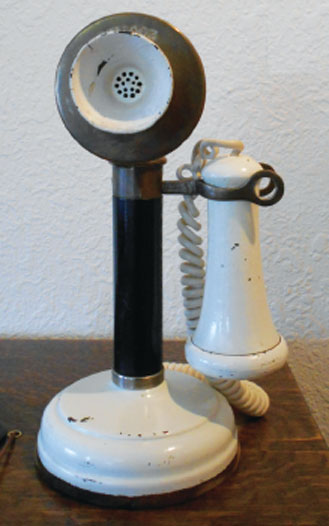 A historic candlestick phone, which was the type of phone common through the 1940s.

The 1917-18 flu pandemic was over and as of Armistice Day, Nov. 11, 1918, so was WW I. Life was easing up and the region was preparing to modernize. Women had just won the right to vote and Prohibition had just kicked in, with the Volsted Act making it illegal to sell “intoxication beverages” having more than 0.5 percent alcohol.

In Southwest Colorado, the McElmo fruit crop was finally being marketed in local towns, due to the popularity of the local apples and an increase of automobiles and trucks which carried the fruit to local stores – the first truck arrived in the region in 1916.

In 1920 Dolores was the wealthiest town per capita of any town in the state, due to the cattle and sheep business. The spring floods that year wiped out the newly established railroad from Dolores to Rico in over a dozen places, and road-straightening projects on the dirt roads between Cortez and Dove Creek and Cortez and Dolores were under way. The effort to build a highway to Durango was just getting under way.

But public utilities were in their infancy. The irrigation district was in operation, as were schools, post offices, and newspapers. Farmers had organized the county fair and a growers association (which became the Farm Bureau).Towns were in the process of electrifying and building sidewalks.

However, phone service was limited. The Dolores-San Juan Telephone company had established service from Summit Ridge to Cortez and Cortez to Bluff, and both Cortez and Dolores had switchboards and one operator. A rural telephone line ran several miles upriver from the town of Dolores. But over in Dolores County it was a different story.

Junior Hollen, a longtime resident of the area noted, in a CD on the history of Farmers that, “Before the phone company, most people had to ride a horse clear to Lewis or Cortez to make a phone call.”

This antique switchboard made by the Kellogg Switchboard & Supply Company sits in the Farmers museum.

Doug Pace, former manager of Farmers, said in the history CD, “Until phone service was established in this region, most residents rode a horse, hitched a ride on a train or a buckboard, or walked many miles to carry news to family and friends.”

In 1920, five local dryland bean farmers took matters into their own hands by starting Farmers Telephone Company. According to Hinds, “Those who founded Farmers believed that the telephone was a necessity, not a luxury. They pooled their resources and worked together to run lines and make local phone service a reality for themselves, their families, and their neighbors. They sold shares to finance operating costs, and if you wanted service you had to set your own poles. The shares cost $25 each and people bought as many as they could afford.”

According to an article by Sonja Horoshko on the Farmers website, “Operators connected each call by inserting a pair of phone plugs into jacks – one end from the caller, the other to the receiver. The telephone switchboard had about 12-15 lines with five to seven households on each line.“ The switchboard operators had to work 24 hours a day, so the company board of directors decided to build a 23-by-15-foot frame house where the operator and family could live.

This office was later moved to Pleasant View, where it remains today.

Each household had a number assigned based upon their position on the line – the original “party line” – and the numbers designated the rings specified for each household. A number of 9J21 meant the line was from the Farmers switchboard (9J) and the household would have two short rings and one long ring. Because the switchboard operators were friends and neighbors, and because the company itself was established by local farmers, customer service became a key feature.

Bessie White, who currently sits on the Farmers Board of Directors, notes that besides giving locals an opportunity to help each other out – by being able to get in touch for emergencies, “It put us in touch with the world,” she tells the Four Corners Free Press.

By the 1930s long-distance service to Cortez and beyond was available, and in the 1950s the company was able to provide direct-dial service, which is what most of us are familiar with now, even though currently the technology is now run on smart switch software. FTC began offering dialup internet service in 1997 and DSL in 2000, and launched Point to Point wireless internet and phone services in 2019. 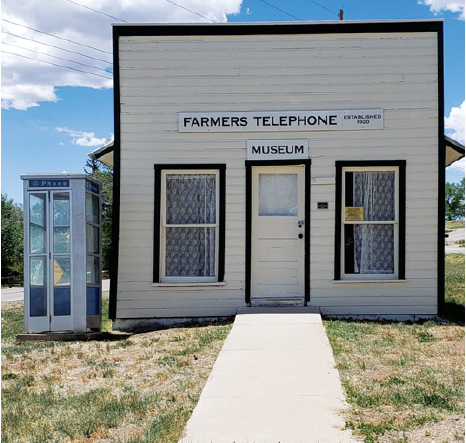 Farmers Telephone has a museum in Pleasant View, Colo., that shows the company’s history and that of regional phone service. Courtesy photo.

Another feature of the company’s commitment to their local community is evidenced by their sponsorship of the community booth at the Cortez Farmers Market. “Farmers Telephone is a huge fan of our local farmers. We wanted to be involved with the local farmers market,” says Hinds.

The community booth is available free of charge to local non-profit groups and educational groups, and has included such groups as Great Old Broads for Wilderness, Southwest Open School art students, the RE-9 School District, and For Pets’ Sake. The company also sponsors a monthly raffle, where $50 worth of “market bucks” to be spent at the market is given to the lucky person who wins the drawing.

The community-service aspect of Farmers is also evidenced in the way the com pany responded to the current COVID-19 pandemic. According to Hinds, “At the onset of COVID-19, Dolores County approached us to help provide internet services to families in Dove Creek to ensure they were able to continue online school, and of course work at home for affected parents as well. We quickly deployed our wireless services in Dove Creek.”

The company went out of its way to focus on areas in Montezuma and Dolores counties without Wi-Fi or internet service, and developed the technologies to provide hot spots and new towers which expanded their coverage.

“In less than a month we added 40 customers in Dove Creek for internet and telephone if they wanted it,” explains Hinds. “We put a priority on making sure that the kids were able to get on network, so that they could do their homework.”

Currently Farmers is focusing on expanding its internet services to the Lewis-Arriola area and the town of Dolores, as well as from Taylor Creek to Rico. The company has 10 employees and has just hired two more because they are so busy. They are also looking for three interns for the summer to help deploy the internet services and are currently taking applications.

“We plan to put you to work right away,” Hinds says. “You will receive training in business, internet/phone deployment and repair. Who knows, you may be the next permanent Farmers Telephone Company employee!”

The company has an office in Cortez as well as in Pleasant View. In Pleasant View they also established a museum in 2008 for those interested in the history of the company and regional telephone service in general. The museum has a switchboard on display, as well as several old telephones, photographs, old relays and “just a lot of memorabilia from the days gone by,” says Hinds.

The museum was just renovated, painted and spruced up for the centennial celebration, but even though the anniversary party won’t take place, interested community members and visitors are encouraged to stop by. The museum is located at 6077 Highway 491 in Pleasant View. Call 970- 562-4211 to schedule your visit.

Recently, this author overheard someone in Dolores saying, “I wish Farmers was MY telephone company,” echoing what Hinds said about people loving their telephone company. “I’ve not heard a bad word about the company,” he says. “We have an awesome story. We love our customers.”

Little did those dryland bean farmers from a hundred years ago know that the telephone company they started would endure precisely because of the spirit of community service, dedication to excellence, resourcefulness and hard work that came naturally to them.