In late summer, fields of golden sunflowers, heavy heads drooping, line the border of U.S. Highway 491 in Southwest Colorado, near the town of Dove Creek. Farmers in this part of Colorado grow the sunflowers for their oily seeds, which they sell to San Juan Bioenergy, LLC. 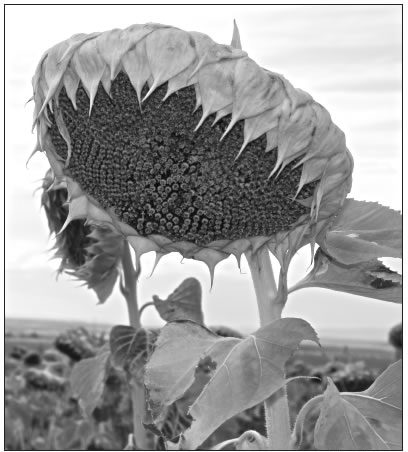 Sunflowers stand ready for harvest near Dove Creek, Colo. Once touted as a source for biodiesel fuels, the regional sunflower crop is now to be used to make cooking oil. Photo by Wendy Mimiaga.

The bioenergy company originally formed about four years ago, with a goal of producing biodiesel fuel for the region. About one year ago, though, market fluctuations forced a change in that mission, and the company, formerly known as San Juan Biodiesel, has changed both its name and its primary purpose, switching from fuel to food production.

“We’ll be using sunflower and safflower oil to sell solely as a food product,” said Jeff Berman, chief executive officer at the company, in a recent interview.

Over the last year, said Berman, the price of sunflower seeds, and, correspondingly, sunflower oil, used for cooking, has gone up dramatically. The plant can now get between $7 and $8 per gallon for selling food-quality oil from the seeds of sunflowers and safflowers. In contrast, diesel fuel prices have hovered in the $3- to $4- per-gallon realm over the past year.

“Sunflower oil has risen to the point where it is one of the highest food grade oils on the market,” Berman said during a recent tour of oil-seed crops held at the Colorado State University Extension research station in Yellow Jacket, Colo.

Greg Vlaming, director of grower services for San Juan Bioenergy, confirmed that food-grade sunflower-oil prices have risen significantly in the past year, partly because large companies have switched to using sunflower oil, which has no trans-fats, to fry packaged foods like potato chips. “The major food companies in this country realized that they couldn’t keep feeding people fatty oil in their foods,” said Vlaming.

The bioenergy company plans to sell its food oil to markets across the country, said Berman, another change from the original goal of the plant, which was to sell fuel to a primarily local market. The plant still aims to use as much renewable energy as possible, and will use a process called gasification to turn sunflower-seed hulls and other plant remnants into a gas that provides part of the electricity to run the plant.

Both Berman and Vlaming said the plant was still pursuing biodiesel as a goal, but on a smaller, pilot-project level. The plant will not use sunflower or safflower seeds to product biodiesel, but has sought canola seeds and used fryer oil, which they would purchase from locations across the Western Slope, as feedstocks for making biodiesel fuel.

As prices for traditional biodiesel feedstocks such as soybean oil rise, biodiesel facilities across the country are turning to alternate sources to produce the raw material for making biodiesel, according to industry reports.

Amber Thurlo Pearson, a communications specialist at the National Biodiesel Board, the primary biodiesel trade organization in the United States, said that other biodiesel manufacturing facilities are also looking to alternate feedstocks as food-oil prices rise.

Alternate sources of biodiesel feed stock include used fryer oil, also known as yellow grease, and leftover animal fats from processing, as well as oil-seed crops such as canola or camelina, a member of the mustard family, that are not fetching such high market prices as food oils. Blue Sun Biodiesel, a company based in Golden, Colo., just received a $41,059 grant from the state of Colorado to commercialize camelina as a biodiesel feedstock.

Across the United States, the industry is also looking into using algae to make biodiesel, although that technology is not yet available at a commercial scale.

San Juan Bioenergy plans to have its grand opening some time in November, said Berman. The plant’s been contracting with growers in the Dove Creek area for four years now, so it has plenty of feedstock for making sunflower and safflower oil.

“We expect to process, before the 2009 harvest, about 20 million pounds of sunflower, safflower, and canola,” Berman said.

This year, the region planted about 15,000 acres of crops specifically for the plant, most of them sunflowers. The Colorado State University Extension research station in Yellow Jacket has worked to support growers by conducting trials of sunflowers, safflowers, canola and camelina in various rotations and irrigation regimes.