Funding for the Four Corners Monument may soon freeze up

It’s crunch time for the long-stalled Four Corners Monument rehabilitation project, intended to turn the tacky and run-down tourist attraction into a much more appealing destination for the thousands of people who flock there each year.

But if it doesn’t start moving forward by mid-month, the project will very likely be abandoned. 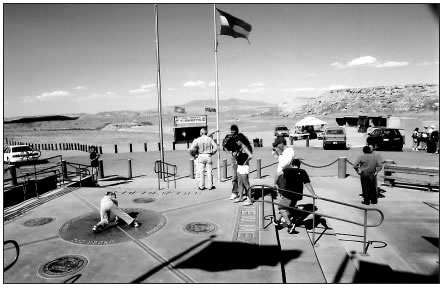 Tourists visit the Four Corners Monument in summer 2003, when a venture was launched to renovate the site and build an interpretive center. Since then, nothing has changed on the ground, and funding for the project is about to expire unless the Navajo and Ute Mountain nations can reach accord.

As things are now, the $3-per-head entrance fee gains visitors access to a granite slab divided into quadrants marking the point at which Arizona, Colorado, New Mexico and Utah meet — along with some plywood vendor stalls and three Porta-Potties. There is no running water and little shade, but that doesn’t deter hardy tourists who do come there from engaging in an almost compulsive tradition — having their pictures taken with one extremity in each of the states.

Ten years ago Congress appropriated $2.25 million for improvements to the landmark, owned jointly by the Navajo and Ute Mountain Ute tribes, on the condition that the four states pony up a roughly equal amount, or $500,000 each.

That was accomplished in 2003, when Colorado joined the other three states in guaranteeing its share, and plans for the project were announced with great fanfare.

Local tourism organizations were enthusiastic about the improvements, since the monument is for many travellers their introduction to this area. Plans included an interpretive museum depicting Native American culture and Southwest attractions, as well as treelined paths, an amphitheatre, permanent vendor booths and handicappedaccessible ramps.

The Four Corners Heritage Council, a heritage tourism council with representatives from the four states, was to dispense the federal funds and provide some oversight.

Since that time, however, nothing has been accomplished to realize the detailed plans developed by the state of Arizona as its contribution.

The two tribes — each of which were to give 100 acres to the site — have never been able to reach an agreement, prompting Mark Vanderpool, a former board member of the Four Corners Heritage Council, to compare the negotiations to getting the Israelis and Palestinians to reach an accord.

“It was a very frustrating process to try to get the Navajos and the Utes to agree — very difficult,” recently recalled Vanderpool, whose term ended in 2007.

The main sticking points seem to be twofold, although getting either tribe to talk about their differences has proven fruitless for the Free Press.

First off, the Navajo Nation claims — despite a U.S. Supreme Court decision to the contrary — that the boundary between the two tribes’ lands has been incorrectly located, and that it actually owns all the land upon which the monument sits. (The Utes claim the Colorado portion.)

Additionally, the Diné objected to splitting the monetary proceeds with the Utes on an equal basis, reasoning that at least three of the “corners” are on Navajo territory. Location of the various planned facilities has also been a sore point — who gets the interpretive center, who gets the restrooms and so on.

New Mexico and Utah have already withdrawn their funding, and if an agreement is not reached soon between the tribes, what funding remains will disappear, according to Cleal Bradford, executive director of the heritage council.

And although Bradford continues last-ditch efforts to obtain a memorandum of understanding between the tribes, the clock is ticking and fruition of the project is becoming less and less likely.

“The Navajos felt that if they could use that boundary dispute to take full ownership of the project then they wouldn’t have to deal with the Utes,” Bradford said. “But they’ve come to realize that [the dispute] may go on for several lifetimes to have it settled, and they want the project.

“They’ve never not wanted the project — they just wanted full ownership, but they’ve recognized that isn’t going to happen . . . and they don’t want to lose the money.”

Complicating the picture, Colorado recently pulled out of the heritage council, which was created in the early 1990s.

Douglas Slothower, an at-large Colorado board member of the council until his term expired last month, said Colorado Gov. Bill Ritter became fed up with the lack of progress and the infighting that paralyzed the project.

“Our governor has recently written to the three other governors . . . and essentiallly pulled the plug on the Four Corners Heritage Council as far as Colorado is concerned,” Slothower said. “[Ritter] is basically tired of seeing nothing happen, and pulled out.

“If this thing goes belly up, Arizona is quite a large loser,” he added, “because their donation was in-kind. They had about $800,000 that they have [already] spent to create the architectural and construction plans for the site.”

Slothower said the lack of progress was more the fault of the Navajo bureaucracy than the Utes. “You think our federal government is tough to work with, or our state government, just try something with the Navajo Nation,” he said, adding that the Utes are a very “entreprenurial bunch” and more willing to compromise.

“They [the Utes] have always been out front on this idea,” he said, “and willing to work with and sign intertribal documents — they’ve been a joy in my six years of being associated with this.”

The Four Corners Heritage Council is made up of three members from each of the states, Slothower explained, but Colorado now has only one representative — Ute Mountain Ute tribal member Veronica Cuthair — since no one has replaced either Vanderpool or Slothower. The structure of the council requires at least three representatives from each state: one Native American board member and two others, one from the Four Corners area and one atlarge.

Ritter sent a letter to the council in November withdrawing Colorado’s participation as of Jan. 12.

“. . . unless each state is able to raise the in-kind cash match by the end of this year (2008), the federal funds appropriated to this effort will sunset,” Ritter wrote, “and it appears quite unlikely that matching funds will be forthcoming by year’s end or that substantial progress on the project will be made near-term.

“Therefore, the State of Colorado is withdrawing from and terminating its participation in the Four Corners Heritage Council,” effective 60 days from its Nov. 13 date.

Aditionally, the deadline for having an agreement between the tribes and keeping the federal funding is Jan. 13.

But Bradford maintains hope that some accommodation can be reached before then and at least a scaled-down project can still be built.

In a phone interview Dec. 29, Bradford explained that Navajo Intergovermental Relations, an executive committee of the Navajo Tribal Council, had recently approved a Memorandum of Understanding between the Dine and the Utes and it was awaiting Navajo President Joe Shirley’s signature. Then it will be passed on to the Ute Mountain Ute Tribal Council for approval at its next meeting, sometime before tribal officals travel to Washington to attend President Obama’s inaguration.

“We’re anticipating, now the Navajo Nation has approved that, the MOU will be signed [by both tribes] within the deadline,” Bradford said. “It would appear at this point that the construction at the site might proceed to where there would be flush toilets and other acommodations there for the visitors that have never existed.

“What might happen beyond that, we’ll wait and see.”

Inflation has eaten up some of the monies in the past few years, Bradford explained. “It’s been four years since we thought we were going to bid on this project, so we can’t build as much as we could back then” because of rising costs.

“We know we can’t do the original [plan] as it was lined out, but by cutting back a little bit, I think we can still proceed – we’ll just have to wait and see what the two-tribe planning committee comes up with.”

Bradford said he does hope to get some of the lost funding back. “There’s got to be an effort made now to get New Mexico to put their match [$500,000] back in,” he said. “Utah funds were returned and I don’t know what success we’ll have there.

“But the project will proceed at this point as near as we can tell — nothing certain, but at least there’s been some headway.”

A condition of the federal grant was that it would equal whatever the states’ match is. In other words, the $500,000 Colorado share – $300,000 from the state and $200,000 from the Ute Mountain Ute tribe – would be matched with federal money, whether or not the other states put up theirs.

“We can proceed with a portion of the project as we’re developing additional match,” he said.

Bradford said Colorado’s withdrawal from his organization may be a moot point.

“Four Corners Heritage Council had completed most of the projects it was designed to do — this one and one in Monument Valley [Ariz.] were the two last we had to work forward,” he said, “so we were not so concerned about Colorado withdrawing if the project was going to die anyway.”

But if an agreement is reached between the tribes, he plans to call Ritter and ask him to return Colorado to the council.

After all the effort put into the project, Bradford isn’t about to let it go without a fight.

“People have asked me why I’ve hung in there. I’ve spent almost 12 years trying to develop support, and not only hours spent, all of the miles traveled, too.

“I just hope I live long enough to be able to go down there and see a ribbon-cutting.”