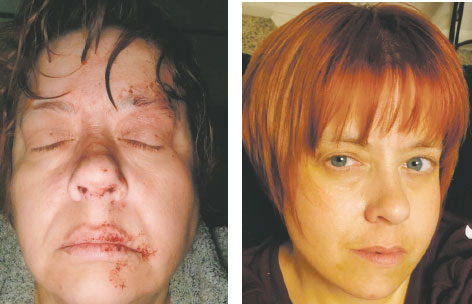 Left, the face of delayed care: Katharhynn Heidelberg on May 2, hours before going to the ER. Right, a much-improved Katharhynn in June.

Ginger ale, that refreshing, slightly spice-kicked drink, came our way sometime in the 1840s. But this isn’t about ginger ale, except tangentially: in a roundabout way, ginger ale may have saved my life.

Not because of any healing properties, but because my request for a friend to bring me some led to her urging me to the emer­gency room in May. Which led to me receiv­ing life-saving care, although I did not appre­ciate that in the immediacy of it all.

Surely, calling paramedics was being “ex­tra” — they are for emergencies! Surely, go­ing to ER on their recommendation was not necessary. Surely, I was just dehydrated and tired; it had been hours, after all, since I’d vomited all that blood. Surely, I absolutely would not be admitted to the hospital, even though my hemoglobin was less than half what it should be. What’s that? A … heli­copter? I am being transferred to another hospital by helicopter?!

Surely, I was about to be bankrupt. Blood. A CT scan. Not one, but two ER admissions. And a chopper ride for 60 miles — then a four-day hospital stay, with blood transfu­sions and procedures to stop a severe GI bleed. Throughout, my mind was on the money. I was not in pain. I wasn’t even scared. But I laid in that bed that first night, half-hysterical over how I was going to pay for it all.

Money was a good part of the reason I did not call 911 when my problem graphi­cally presented itself all over the floor. Cost was why I did not obtain the screening pro­cedures that were recommended before the emergency.

Ironically, what I had been experiencing before it reached an emergency — which I later learned was a bleeding ulcer that pen­etrated the gastro-duodenal artery — had hit the point that I was going to bite the bullet and pay for a CT scan. I had planned to make the call the next business day, a Monday. I began hemorrhaging that Sunday. I got the CT scan, though. In the emergency room. It found nothing — had I just booked one, I would have spent the money, but maybe not had an answer.

But, wait! What about insurance? Well, I have insurance. It’s just that the deductible I had to meet before anything — even an office visit — would be covered at all was prohibitively high. And I didn’t think that I would be able to pay for care if something was found to be seriously wrong.

So I did not get the tests. So I had a life-threatening emergency. So the cost to both me and my insurance company is much, much higher than a CT scan would have been.

The cost worry is not unique; neither is the reality of someone — whether an individual, an insurance company, the government, or hospital charity write-offs — paying more in the long run when care is delayed.

According to an access and affordability study by Peterson Center on Healthcare and Kaiser Family Foundation, 1-in-10 adults with insurance reported delaying or going without care because of costs in 2019. For uninsured adults, it’s worse: 1-in-3 reported going without due to costs.

Further, adults with incomes below 200 percent of the federal poverty line were found to go without more often than those with incomes above that level. The unin­sured are more likely to use urgent care or emergency services. This is obviously more expensive, but without insurance or money, they lack access to less expensive options. The same is true for those with insurance but an income that is disproportionate to the costs. [[(Pssst! That’s most of us.)

To put it more directly than Peterson-KFF might be inclined: People gamble with their lives because our health care delivery system puts profits ahead of people.

This is not a slur on the providers of that care — who deserve respect, gratitude and, yes, to be paid for their work — but is a criti­cism of the profit-driven system.

The system means even someone em­ployed full-time, with insurance, with sup­plemental insurance, even, and with some savings (me!) is leery of seeking care beyond an office visit, and is reluctant even to do that, since without a copay arrangement un­til that magical deductible number is hit, the cost is about $200 per.

The system causes someone who is bleed­ing out on her bathroom floor to reason that she can maybe sleep it all off and rehydrate with some water, ginger ale and Gatorade, since even in her altered state, she can still manage simple math. (Here’s a little bit: A basic cremation is about the same price as what I paid just for coming into the ER. And, yes. People do think that way. They have to.)

The system puts others in an even more precarious position. At least insurance plans have out-of-pocket maximums each year and because of that, I am — miraculously — not going to have to seek bankruptcy protection because the bill to-date exceeds $160,000. Qualifying for sliding-scale fees also helped immensely.

So there is an entire category of people who are insured, but cannot afford to use that insurance for much preventive care. When circumstances give them no choice, they have to get creative and/or “lucky” enough to hit their out of pocket max, at which point insurance kicks in everything. Lucky is a relative term as, again, they gam­ble their lives, too.

There is yet another subcategory of need to consider: The people who make too much, on paper, to qualify for any aid, but who do not have insurance, because it isn’t available through their work and they cannot afford premiums on the marketplace. (And they don’t qualify for the subsidy under the ACA or Colorado’s health care exchange.)

I know such people. One of them even brought me ginger ale, and, oh yes, saved my life. You also know people in this situation, even if you don’t realize it.

What do they do, when they look into getting insurance, and are quoted a figure of $750 a month? Naturally, that is just the premium; it is not a buy-in for all expenses paid when there is a problem, and medical insurance is not their only expense.

What do they do when a member of their family winds up needing life-saving surgery, and the bill is $100,000, and they are deemed as making “too much money” to qualify for even the hospital’s in-house charity dis­counts? What about when someone in the family has a chronic condition, requiring pricey medication to manage?

Here are some of the things people in this situation do: They either ignore the bills and just let the collections process happen, or they file bankruptcy, or they lose every asset they have to pay a big medical bill — or they ration their medication.

Consider Jesimya David Scherer-Radcliff. He was diabetic. He could not afford insulin. His family buried him in 2019. He was 21. Equally as awful, he was not the only person to chance rationing his insulin and lose.

It is baffling this manifestly amoral health-care delivery system continues without sig­nificant changes. It is simply bizarre that the scare word “socialized!” has staying power when it comes in front of the word “medi­cine.” It is bizarre, because, but for a minor­ity of anti-tax zealots, “socialized” does not precede words like police force, or schools, or trash collection, or road and bridge de­partment.

Nor does it precede the words “fire dis­trict,” which where I live operates the am­bulance service, too. Since I did not take the ambulance to the ER that day in early May, there was not a charge for one. (My friend drove me — care was literally across the street the whole time, but might as well have been a few thousand light-years, because I could not get there without help.) As for the paramedics coming into my house and as­sessing me? I’ve yet to see any bill for that.

So, why do we accept that so many of our vital services are subsidized by taxes, but draw the line at medical care (except for Congress)?

Most of us who are not entirely empty of compassion do not object to Medicaid help­ing the very poor, or to Medicare, to help older Americans, even if we might worry about the programs being abused.

This is all absurd. People are dying be­cause of it, and they will continue to die be­cause of it. I do not pretend to know the answers, but if I did not appreciate the prob­lem before, I certainly do now.

The very poor. The very rich. And the very lucky.

We can do better. We have to.

So far, I am falling into the “very lucky” cat­egory — I went from being flown to medical care on May 2 to, one week later, sitting with my mother at a meal. So far, there are only a few unknowns as to insurance payments.

But the systemic problem with our health-care delivery method isn’t just about me.

It’s not about a week in my life that objec­tively was one of the worst, but that subjec­tively, because of the astounding outcome, has me calling it “My Best Worst Week.”

And, no. It isn’t about ginger ale, either.

Katharhynn Heidelberg is an award-winning journalist in Montrose, Colo.