Race, like a flaming cross at a Klan rally, stands at the center of Sing, Unburied, Sing, casting shadows on all that transpires. The novel, Jesmyn Ward’s third and the first since her National Book Award-winning Salvage the Bones, depicts a tumultuous week in the lives of three generations of the River family, proud but impoverished denizens of bayou Mississippi.

Pop, the family patriarch, is haunted by memories of his juvenile incarceration at Parchman Farm – the Mississippi State Penitentiary – the brutality of which we glimpse in lurid flashbacks. Mam, bedridden with cancer, is a Santera whose gift of clairvoyance has passed to her daughter Leonie even if her healing arts and empathetic wisdom have not. As for Leonie, her indifference to motherhood contrasts with her dedication to methamphetamine, leaving it to her son Jojo, wise beyond his 13 years, to care for his infant sister Kayla. 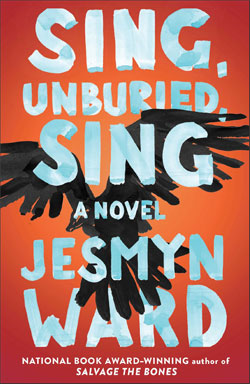 The novel’s action centers on the imminent release from prison of Jojo and Kayla’s father Michael, an event that occasions a road trip back to Parchman, a primer on bad parenting, and Jojo’s own initiation to the supernatural when the troubled ghost of Richie, a young inmate whom Pop had protected while in prison years ago, follows Jojo home.

One might reasonably expect that this combination of a celebrated writer, a colorful and well-imagined cast of characters, and a fraught inciting incident would lead to a compelling novel. In the case of Sing, Unburied, Sing ($26, from Scribner), however, that expectation goes largely unrealized.

Take, for starters, the author’s prose. Although a skilled wordsmith, Ward seems way too fond of her own talent. When characters laugh, it’s a sound “erupting from her insides like a hard shovel cleaved it from her.” When they drive, “the horizon opens up like a shucked oyster shell.” When they hug, “blood thuds thickly under my ear, the skin of his arm like tepid water.” And so it goes.

The novel’s shortcomings include more than just rampant adverbs and affected similes. For one thing, it’s an unrelenting downer. Michael cooks meth. His cousin murdered Leonie’s brother while his father, the bigoted county sheriff, covered it up. Little Kayla is always sick or hungry or both, and when Michael and Leonie aren’t neglecting their children, they’re slapping them. And then there’s Richie, the spirit presence from Parchman, whose Dickensian backstory will all but curl your hair.

Next is the matter of stereotyping. In the rural dystopia Ward has confected, every white person we encounter – Michael, his father, his lawyer, their friend Misty, their schoolmates, a police officer, the prison guards – is a druggie, a racist, or worse. And while this might be expected to provide the sort of antagonism upon which good fiction depends, the effect here is almost cartoonish, leaving one to wonder how the novel would be received were the racial roles reversed.

The author’s worst sin, however, is entropy. The story meanders, and we follow, and it’s never quite clear where we’re going. Worse, it’s never clear why. What was her goal in creating these characters, this story, this novel? What was the urgency? Was it to tell us that life is tough, then you die? That the past haunts our present? Or was there something more?

I don’t know, and my guess is neither will you once you’ve finally reached the end. In fairness to Ward, however, reading is a subjective exercise. If lyric prose and domestic horror are to your liking, then by all means, give it a try. Rest assured you won’t be alone, since the author’s pedigree and the book’s pre-publication buzz all but guarantee bestsellerdom. But for my money, if it’s a moving evocation of class and racial struggle you’re looking for, you might want to try Toni Morrison or Alice Walker instead.