Grassroot reporters spring up on the rez

Ed Becenti’s e-mail list is rez rich and choice. It contains most of the names of key activists in the Navajo rez and their organizations.

When Becenti attends a Navajo council meeting in Window Rock, Ariz., he writes his own account of what transpired. 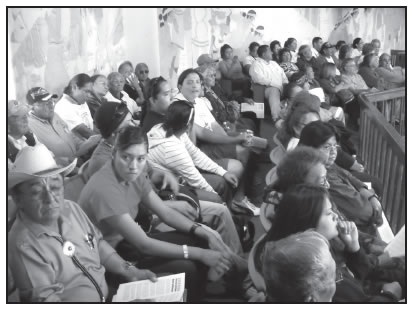 Observers pack the gallery in the Navajo council chambers at Window Rock, Ariz., on Sept. 29, 2010, during a peaceful protest over water negotiation rights. Photo by Sonja Horoshko

Then, through the use of what he calls “simple social networking,” supporters pass on his information to thousands of activists and associations, including global causes such as Green Cross Sweden, whose 800 members potentially then connect the indigenous Sampi people to the goings-on in Window Rock.

Thousands of people may be paying attention when Rezztone e-mails pop up in the inbox. Grassroots organizations such as the Black Mesa Water Coalition can connect his report to their nearly 5,000 Facebook fans if they choose to forward his writing.

“I have urban, rez, global, military people adding their names to my e-mail list because they can’t be there, they can’t follow it in the newspapers,” said Becenti. “This information highway is more like our Navajo clan system.”

True, his writing is more conversational than traditional news reporting. The nuances lost in conventional papers show up in Becenti’s voice, inserting, “da” for “the” and other atypical vernacular. It’s very much a language of the brothers and sisters, for instance, in this excerpt from the rezztone report on Jan. 24 announcing the election of Johnny Naize as 22nd Navajo Nation Council Speaker. Becenti writes,

“Yateh Dine’ People & Friends! Just a quik update from central government. After an all day battle between 24 tribal legislators …. Each of the 5 nominees were given 15 minutes to issue a platform and by far, the most popular speech came from new delegate Russell Begay of Northern Navajo. He was followed by Lorenzo Bates but the final voting told otherwise. As expected, there were ‘ooohs’ and ‘ahhhs’ from the public but as the announcement came that Mr. Naize had won, a lot of young people got up and left the chambers abruptly!So take it for what it’s worth…we do have a new Speaker in place. I am a little under the weather so this is all i will report for tonite. Thank you for your patience!”

Blogging and citizen journalism is taking its place in news coverage of the turbulent politics of Dinetah.

It’s the immediacy of the observer that is so compelling, especially in a place so difficult and expensive to get to as the seat of Navajo government in Window Rock, Ariz., where delegate and executive behavior had deteriorated in the past year to such a low point prior to the new president’s inauguration that citizens had had enough.

“I can’t believe it has been just two months,” said Becenti, “when we began covering the CDs [council delegates] in session over the issues then of Peabody Coal and water rights.” The local people who are directly affected deserve a voice at the negotiations, he said, and that’s why he’s in the right place at the right time.

Coal and water were not the only issues heightening government tension as the holidays drew near. Turmoil prevailed in all branches of the government, triggered on Sept. 29, when Special Prosecutor Alan Balaran filed criminal complaints against 77 of the 88 Navajo Nation 21st Council delegates.

Balaran was hired by the 21st Council the year before to investigate possible procurement violations in the Office of the President and Vice President involving contracts with tribal enterprises BCDS and OnSAT.

Then a rift between the legislative and executive branches erupted when the 21st Council directed that legislation be drafted to fire Attorney General Louis Denetsosie and Deputy Attorney General Harrison Tsosie after Assistant Attorney General Henry Howe said he could not provide financial information about the Office of the Special Prosecutor outside of an executive session.

By Nov. 14 council delegates were accusing Howe, the Department of Justice, the Supreme Court and the executive branch of mounting a conspiracy against them.

And then on Oct. 22 the Navajo Nation Supreme Court disbarred Chief Legislative Counsel Frank Seanez, the top attorney for the legislative branch, for advising his clients to defy a court order. The decision was rescinded on Dec. 3 by the high court and the disbarment replaced with a four-year, one-month suspension.

All of this simmered behind the scenes of the November elections during which the Navajo people were set to choose a new president and vice president and seat 24, not 88, council delegates, under a government restructuring passed by the people a year before.

Former Vice President Ben Shelley and running mate Rex Lee Jim were elected as the new chief officers despite complaints against both alleging fraudulent use of slush funds.

The electorate also voted in 8 freshmen delegates that joined the returning 16 winning delegates running for re-election, 11 of whom, at the time of the election, faced outstanding slush-fund complaints.

It was a time of chaos. The news was hard to follow. Local papers, the Free Press and the Navajo Times flew off the stands, but it wasn’t enough. The people left behind, at home and work were hours away from Window Rock. That is when Becenti’s email list began to grow by requests, even from media in Australia.

By the time the chilly inauguration took place, Becenti and another citizen journal ist, Norman Patrick Brown, began meeting face to face with the delegates, “on behalf of the people who live with the coal, uranium, oil.”

What grew from political chaos was a promise by President-elect Shelley and the 22nd council to work together, to find a new beginning. So far, the council is receiving good marks for eliminating legislation that gave exorbitant pay for attending caucus meetings during sessions. They voted also to collapse the 12-committee structure into four committees, established the new Committee of the Whole, or Naa’bik’i yati, which translates to “one voice of a group,” while discussing how they can integrate Navajo traditional concepts of thinking, planning, life, and the achievement process into the restructuring of the committee system.

Brown is a veteran filmmaker currently wrapping up work on “The Rainbow Boy,” which he wrote, directed, and produced with an all-Navajo cast. He holds court on Facebook. His nightly posts often reflect the business at council chambers.

“It’s hard to estimate how many people read my posts because many send out and share what I write. It could be in the hundreds. I get many, many friends daily because of my wall.”

Becenti and Brown have seen the delegates stay focused since the day after Christmas when they began the mandated restructuring of operations necessary to fit their working 24 into the shoes of the former 88.

“The old guard is trying hard to influence the new delegates, but I think it is hopeful,” said Brown by phone. “They even let me address them the Monday after inauguration at the Quality Inn in Window Rock on natural-resources issues and URI contributions to the inauguration funds.”

Brown said some of the new delegates are trying to create a new path. “My role is to stress their responsibility to the people – accountability, integrity, transparency and the ancient value system of the people. This is how I participate – by educating. I get the word out.”

There is no financial compensation for their work and no by-lines more than the handles they use on their social media. But there is a satisfaction that comes with setting an example as a citizen reporter.

Tina Deschenie, former editor of the Tribal College Journal and freelance journalist, said that she isn’t on Becenti’s rezztone e-mail list but, “I have great appreciation for ordinary Diné citizens who can attend Navajo tribal government meetings to observe and report on their observations. It does take a lot of commitment and interest to attend meetings at your own expense.”

“I consider my work global and I will work with just about anyone out there,” said Becenti.

“I plan to keep guard on our new 24 as well as our Navajo president and vice president. My encouragement to continue stems from individuals that contact me out of the blue and I appreciate that.”