Greaves slices and dices L.A. in The Chimera Club 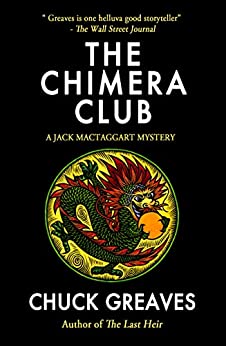 Breezy and fun, and as sharp as the switchblade that does the killing in The Chimera Club, local author and regular Prose & Cons contributor Chuck Greaves’ fourth Jack MacTaggert mystery offers readers a knowing romp through the murderous heart of Los Angeles, Greaves’ home for a quarter of a century before relocating to McElmo Canyon west of Cortez a few years ago.

Like Greaves in his former L.A. life, Jack is a lawyer of some renown in Southern California. He is hired to defend an accused murderer by pin-up-model-turned-nightclub-owner Mae Gallagher, the accused man’s daughter. Shortly thereafter, Mae’s father is kidnapped en route to a court hearing and brutally murdered.

Having fallen hard for Mae, Jack switches gears from defending his now-dead client to hunting down his former client’s killers. Mae, meanwhile, plays the part of the beguiling femme fatale to aching perfection, driving the fast-paced story from her windowed office overlooking the seething mass of dancers on the floor of her nightclub, and from behind the wheel of her flashy, cherry-red Porsche.

As Jack tracks the killers—and avoids becoming their next victim himself—he keeps up a running line of droll commentary, often laugh-out-loud funny, on topics ranging from bratty kids to police, media, and legal ineptitude to, of course, L.A. traffic.

While observing the much younger habitués of Mae’s nightclub, he notes, “I sipped and watched as dancers danced and gawkers gawked and felt a bit like some pith-helmeted anthropologist studying the courtship rituals of the Sumatran birds of paradise, their biological imperative sublimated into elaborate displays of plumage and preening and ritualized movement.”

When it comes to the enchanting Mae, Jack is driven by his own pressing biological imperative, leading to a turbocharged climax in the aforementioned Porsche, and a final twist to the story that will satisfy the most demanding of mystery aficionados.

Greaves’ earlier MacTaggart mysteries, Hush Money, Green-Eyed Lady, and The Last Heir, serve as highly entertaining guides to, respectively, the L.A. equestrian and art scenes, and the Napa wine world. His locally based novels, Hard Twisted and Church of the Graveyard Saints, are keenly intelligent, thought-provoking tales of life in the Four Corners, both past and present.

The Chimera Club is available at Maria’s Bookshop in Durango, via chuckgreaves.com, and wherever books are sold.

Scott Graham is the author of Canyonlands Carnage, currently a finalist for the 2022 Colorado Book Award for Best Mystery, and six other National Park Mysteries for Torrey House Press. He lives in Durango. More at scottfranklingraham.com.