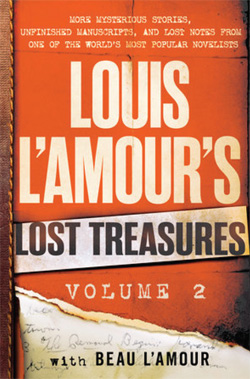 In his introduction to Louis L’Amour’s Lost Treasures, Vol. 2, the second volume of his father’s unfinished or previously unpublished stories, novels, notes, and film and television treatments, editor and co-author Beau L’Amour writes, “[W]hat you see here was only a failure of longevity, for Dad intended to permanently abandon very few of these ideas. ‘Found several good story openings,’ he wrote in 1976, ‘. . . and once the opening is written, the story is mine forever.’”

Here then was a man who understood his own talents. While most associate Louis L’Amour with the Western novels on which he so successfully focused after World War II, few know that his first published works were actually of poetry. Those were followed by magazine stories of travel and adventure based on his peripatetic life as a lumberjack and miner, hobo and prizefighter, merchant seaman and soldier (but never, Beau tells us, as a cowboy.) Then, after decades of prolific obscurity, his career break finally came in 1953 with release of the John Wayne film Hondo, adapted from his short story “Gift of Cochise.” By the time of his death (from cancer, at age 80) in 1988, Louis L’Amour had published 91 novels and over 200 short stories, had earned both a National Book Award (in 1979) and a Presidential Medal of Freedom (in 1984), and had sold over 200 million copies of his books worldwide. Today, translated into more than twenty languages, that number approaches an astonishing 330 million.

What all his stories shared in common – what made Louis L’Amour “our foremost storyteller of the American West” – were great beginnings, and in this second volume of his authorial ephemera we see that extraordinary talent on display for over 500 thrilling pages. They include classic Westerns, of course, but also historical fiction and tales of adventure, hardboiled crime and speculative fiction. Anchoring the collection are two extraordinary pieces. The first is Ben Mallory, 17 chapters of an unfinished Tibetan adventure novel that Louis began in the mid-1960s, set aside, and then revived a decade later after corresponding with the Dalai Lama. The second is Borden Chantry II, ten chapters of an intended sequel to his 1977 frontier Western that Louis wrote in 1988 “during a time when he was on oxygen and often dealing with the aftereffects of chemotherapy” for the lung cancer that claimed him later that year.

Both Lost Treasures volumes – the first was reviewed here in January of 2018 – are part and parcel of a larger project that includes informative postscripts to reissued paperback versions of many of Louis’ most popular novels as well as No Traveller Returns, Louis’ first attempted novel, never before in print, completed by Beau and published last year. All were made possible – some might say necessary – by the sheer volume of unfinished material Louis left at his death in 1988, and all are gilded by Beau’s thoughtful commentary on his father’s life and legacy.

While the clock may have expired on Louis’ plans to return to most if not all of the stories featured here, Louis L’Amour’s Lost Treasures, Vol. 2 ($30, from Bantam) will still appeal not just to his legion of devoted fans, but to any reader who values immersive storytelling and revealing insights into the mind and methods of an American literary icon.

Chuck Greaves/C. Joseph Greaves is a member of the National Book Critics Circle and the author of six novels, most recently Church of the Graveyard Saints (Torrey House Press), the “Four Corners/One Book” community-wide reading program selection for 2019-2020. You can visit him at www.chuckgreaves.com.