Helping Native Americans to be heard

Ever since the advent of the reservation system, Native Americans have struggled with poverty, unemployment and alcoholism. Art Neskahi of Cortez believes that some of those problems can be traced to the disconnection between Indians and their historic roots.

“The deepest wound that was left in Native Americans was from our culture and religion being taken away from us,” said Neskahi.

“The basis of our culture is our ceremony and religion.”

Neskahi is working to repair some of that damage through his non-profit organization, Southwest Intertribal Voice. “Our goal is to address concerns and issues of native people in Southwest Colorado.”

Neskahi is well-qualified to understand the sense of loss that can sometimes result when Native Americans are severed from their roots. 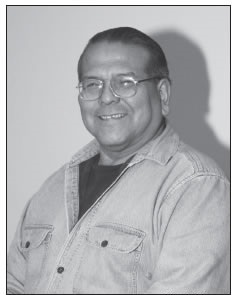 Art Neskahi of Cortez is the head of Southwest Intertribal Voice. Photo by Wendy Mimiaga.

He and his family live south of Cortez on three acres that was part of 160 acres purchased by his father in 1967. His father farmed the land, using his kids as cheap labor. After the children grew up and moved away, his father sold all but 28 acres.

A Southern Baptist preacher, Neskahi’s father used 24 acres as a home for his nonprofit called Compass Crusade For Christ. It was his vision to worship Christ using Native American ceremony. However, traditional Christians in Cortez disapproved of the idea, and refused to support him. At the time of his death, his father had turned away from the Southern Baptist Church and was fully practicing Native American spirituality. “It was the happiest I’d ever seen my dad,” said Neskahi.

Neskahi now practices the peyote religion, which he said was brought to the Southwest from the Cheyennes by Neskahi’s paternal grandfather in 1932. This form of indigenous spiritual belief varies according to the tribe practicing it, but it includes belief in a supreme being and the importance of avoiding substance abuse.

When Neskahi’s parents decided to marry, his maternal grandfather said he would not let his daughter marry a non-Catholic. At that time, the paternal side of his family converted to Catholicism. Neskahi was raised Catholic and had no ties with his Navajo relatives, who were still living a traditional Native American way of life.

It wasn’t until years later, after the demise of a marriage and a 10-year stint with alcoholism, that Neskahi found his way tentatively back to his spiritual roots. He was looking for help with his alcoholism and sought the assistant of a seer.

“My family all returned to Native American spirituality right before they died,” Neskahi said. “That made me want to turn back to it, since I figured inevitably I would go that route anyway.”

Southwest Intertribal Voice began as the All Nations Medicine Lodge in 1998, and by 2005 had evolved into SIV, a 501 (c)3 organization. The 24 acres that was part of Neskahi’s father’s non-profit now belong to SIV. Neskahi has big plans for this land and SIV, and is looking for support from the community.

The vision closest to his heart is for SIV to provide a much-needed positive influence in the lives of the young people in his Native American community. He has observed that Native American youths raised off the reservation, away from their culture and spirituality, often flounder. He would like SIV to help reconnect them with their culture.

Neskahi and SIV used to be supported through the Cortez Cultural Center but have since left it.

One of his missions is for the SIV land to become a ceremonial ground for families and clans, particularly those who live off the reservation and have no place to go for ceremony.

“The basis of our culture is our ceremony and religion. Ceremonies are specific to what your tribe is, and your particular situation. This land can provide a place for whatever it is you may need.”

He would like to have a teepee and a hogan on the land that could be used for many different ceremonies. Teepees were used by Great Plains tribes as homes and ceremonial spaces, and are used in the peyote religion as the sacred space.

The first part of the ceremony will be to erect the teepee. “Everything is symbolic,” said Neskahi, “from the order in which the poles are placed to the direction of the door.” The ceremony would end with the teepee being taken down.

In cold weather it is common to use a hogan for ceremonies. Hogans, or round houses, originated with the Navajos and are dwellings as well as a place for sacred rites. The door is always at the east to face the rising sun.

Because ceremonies often take an entire day, evening and the next morning, Neskahi would like to build a dining hall as well. He envisions solar panels, wind turbines, composting, and gardens.

SIV currently hosts a sweat lodge on the first and third Wednesdays of each month on the tract 7 miles south of Cortez. These sweats are free, and tribal as well as non-tribal folks are welcome to attend. The sweats are conducted by Darwin Whitestone, a member of the Cree tribe with a master’s degree in social work.

The sweat lodge on the SIV land is a lowlying round frame built from red willow. During ceremonies it is covered by a large army tent. A fire is built outside the lodge to heat rocks that are then placed inside the lodge. Neskahi would like to invite other tribes to do sweats on the SIV land.

Neskahi looks back on his own childhood and wonders how his life would have been different had he been raised within the Navajo community. “Not having cultural support left a hole inside me, that I was never, until much later, able to fill,” he said.

Neskahi also has a much broader vision for young Native Americans. He recalls how governments and churches around the world have issued public apologies to native people for the horrific mistreatments of the past.

His vision is that Native American children, whether living on the reservation or not, will have the option of attending their own schools that will steep them in the culture and religion of their people. Neskahi would like to see these schools funded by the government and churches.

Currently the Navajo Nation is looking in this direction, and would like to become the 51st state in terms of education, he said. Due to the location of their reservation, the Navajos contend with three different states’ boards of education. By separating themselves from these ties, they could initiate their vision of a new paradigm of education.

Neskahi points out that there are private schools in Cortez where children can be schooled within their religion. Why not one for Native American youths?

Neskahi said, “The literal translation of Neskahi is ‘Fat’. I think it was a way to describe my family because they were good gardeners and good hunters and were also skilled in storing all this food for the long winter. This is good planning for the future.”

Neskahi hopes the work he is doing now will pay off in the future, and thus he can live up to his name.

If you have an interest in finding out more about Southwest Intertribal Voice, wish to take part in any of the activities, or want to lend your support, Neskahi would be pleased to speak to you. He can be reached at 970-739-7280.