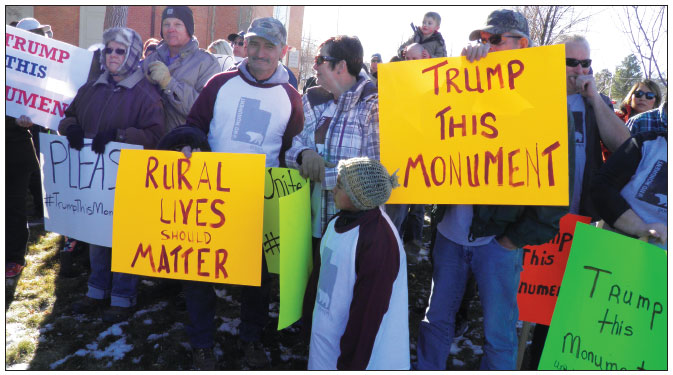 President Obama’s proclamation of a 1.35-million-acre national monument in southeastern Utah prompted a protest in Monticello, Utah, from locals who said the designation should be Overturned. Photo by Gail Binkly

Both delight and rage greeted President Obama’s designation of the Bears Ears National Monument on Dec. 28.

Native American tribes hailed the historic inclusion of five tribes in the monument’s management, while environmentalists and archaeologists praised the idea of protecting 1.35 million acres of fragile desert landscape and stunning red-rock scenery.

The new monument is 550,000 acres shy of the 1.9-million-acre proposal that had been put forth by an intertribal coalition. Still, coalition members said they were honored by the designation on a landscape rich in natural and cultural resources, including more than 100,000 archaeological sites. The land base is considered sacred homelands for the Hopi, Zuni, Ute Mountain Ute, Navajo Nation and Uintah Ute tribes that comprise the coalition.

“President Obama has been consistent in his commitment to work with Tribal governments, and this historic designation builds on his legacy,” said Navajo Nation President Russell Begaye in a statement. “We are particularly pleased that the designation affirms tribal sovereignty and provides a collaborative role for tribes [while] ensuring a seat at the management table.”

The nonprofit Friends of Cedar Mesa, based in Bluff, Utah, said in a web posting, “The President’s action protects tens of thousands of archaeological sites – exactly the ‘objects’ the Antiquities Act was created to protect – that make the public lands near Bluff so unique. In fact, the Bears Ears Monument contains more cultural sites than any other National Monument or National Park in the United States.”

But elected officials across Utah were nearly unanimous in expressing outrage over the President’s use of the Antiquities Act to protect the area.

“I am deeply disturbed by what has resulted from a troubling process,” said Utah Gov. Gary Herbert, promising to seek to undo the designation under the Trump administration.

A number of state and local elected officials spoke at a protest in Monticello, Utah, the day after the designation was announced.

Utah Congressmen Rob Bishop and Jason Chaffetz had put forth a legislative alternative called the Public Lands Initiative under which the Bears Ears area would have been designated as two national conservation areas totaling about 1.2 million acres.

But their bill died in Congress, and monument supporters said it was time for Obama to act.

In a video statement, Bishop said Utah was “saddened” by the announcement. He said the monument process had taken place “in secrecy and in shadow,” and promised the state would seek all means to overturn the monument, whether through legislative, judicial, or executive action.

“As Utahns, we will fight to right this wrong,” Bishop said.

No president has ever unilaterally overturned another president’s national monument and it is not clear that such an attempt would be legal. However, Congress has the authority to undo monuments or simply to render them meaningless by refusing to fund their management.

Although critics protesting the proclamation have spoken of the land being “taken,” it is not actually changing hands. Currently managed by the U.S. Forest Service and Bureau of Land Management, it will continue to be managed by those agencies.

An advisory committee will be established under the Federal Advisory Committee Act with representatives of state and local governments, tribes, recreational users, local business owners, and private landowners. That committee will help develop a management plan.

Additionally, as was requested in the intertribal coalition’s proposal, a tribal commission consisting of one elected officer each from the Hopi Nation, Navajo Nation, Ute Mountain Ute Tribe, Ute Indian Tribe of the Uintah Ouray, and Zuni Tribe is also to be established. The Bears Ears Commission is intended to ensure that management decisions reflect tribal expertise and traditional and historical knowledge. 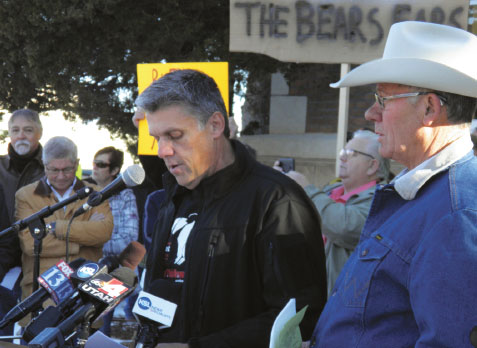 The commission is a first for tribes on non-reservation land.

Utah Diné Bikéyah, the grassroots organization that more than six years ago began the Native effort to be included in decision-making about the future of federal lands in southeastern Utah, said in a statement that the declaration marks the first time Native American tribes have called for and succeeded in protecting their ancestral homelands through a president’s national-monument designation.

Some individual Native Americans, particularly from Utah Navajo lands near Bears Ears, have voiced concern that the monument will mean reduced access for them.

But the proclamation provides for “access for tribal members to continue traditional cultural and customary uses, consistent with the 1996 American Indian Religious Freedom Act, including collection of medicines, berries and other vegetation, forest products, and firewood for personal noncommercial use. . .”

“Rarely do tribal traditional knowledge and the healing powers of such wisdom spill over into national politics so much as to inspire thousands of people from a myriad of backgrounds,” said Eric Descheenie, Arizona representative- elect and a former co-chairman of the intertribal coalition. “So many people from many walks of life, professions, religious traditions, and industry have championed our truth to the White House to achieve Bears Ears National Monument. I’m proud of our beautiful movement and all the people behind it.”

The proclamation says valid existing rights, including water rights, are to be honored.

The proclamation includes an offer to trade public land with the state of Utah. It authorizes the Interior Secretary to pursue an exchange of monument inholdings currently owned by the state and administered by the State of Utah School and Institutional Trust Lands Administration (SITLA) for land of equal value managed by the BLM outside the monument. Such information is due on Obama’s desk by Jan. 19, the proclamation states.

In a statement, Interior Secretary Sally Jewell praised the designations. “The rock art, ancient dwellings, and ceremonial sites concealed within these breathtaking landscapes help tell the story of people who have stewarded these lands for hundreds of generations,” said Jewell, who visited Bluff, Utah, near Bears Ears, in June and heard a parade of local citizens speaking both for and against the monument.

“Today’s action builds on an extraordinary effort from tribes, local communities, and members of Congress to ensure that these treasures are protected for generations to come, so that tribes may continue to use and care for these lands, and all may have an opportunity to enjoy their beauty and learn from their rich cultural history.”

Former Navajo Nation president Peterson Zah acknowledged the long, patient effort of the many tribal organizers who sought the monument. “The President’s designation is a testament to the will of sovereign Indian nations, as well as the hard work of our people on the ground who worked tirelessly years ago leading up today,” he said. “It was their vision, determination, and purpose rooted in our traditional ways that contributed greatly to today’s shared accomplishment.”

Board members of the Utah Diné Bikéyah gathered in mid-afternoon near Bluff when they heard the news.

“It was time for a ceremony today,” said former San Juan County Commissioner Mark Maryboy, a Navajo, “and a time to relish for us all, for the moment.” In a telephone call to the Free Press, he said, “I kind of don’t know what to do with myself because all along a lot of people said it couldn’t happen. Yet it did. Everyone worked together and for so long. Now, it is here and it was worth every effort.”

He added that the group will hold a community celebration in Monument Valley at the visitors’ center from 9 a.m. to 2 p.m. on Jan. 7.

“Mormon history, the Constitution and laws, and white man’s history are written on paper,” said Zuni Cultural Resources Advisory Committee Chairman Octavius Seowtewa in a statement. “Our history—the Native history—is written in stone on canyon walls. We celebrate knowing our history at Bears Ears will be protected for future generations, forever.”