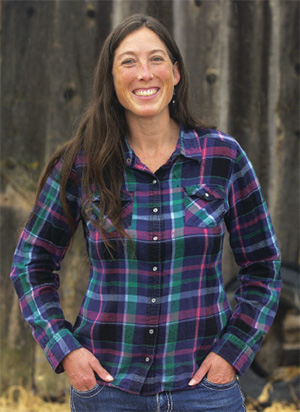 In these days of conflict nationwide, Rebecca Samulski, who is running as an unaffiliated candidate for Montezuma County commissioner, hopes to be able to help pull people together.

“Commissioners can be leaders in bringing people together and empowering them,” she said.

Samulski is running for commissioner against Joel Stevenson, a Republican. (Note: The Four Corners Free Press sought to do an interview with Stevenson, but he did not respond to messages.)

“Everybody’s on pins and needles right now and wanting things to be better,” she said.” This is an opportunity for us as a community to have more conversations with people we don’t necessarily know and find our common ground.”

Samulski’s entry into the race carries a certain timeliness, as 2020 is the 100th anniversary of the 19th Amendment to the U.S. Constitution, which gave women the right to vote.

Samulski is only the fifth woman in the county’s history to run for commissioner. Helen McClellan, Cheryl Baker, and M.B. McAfee also ran in general elections for the commission, and Pat DeGagne Rule ran in the 2012 Republican primary. McClellan is the only woman, however, who was ever actually elected to the commission. She served one term.

Samulski wasn’t born in Montezuma County but she’s very close to a native resident – her family moved here before she was a year old.

Her father, Everett Whitehead, who has a degree in archaeology, was drawn to Mesa Verde National Park and ultimately was hired there, first as a seasonal park ranger, then as a law-enforcement ranger. Seeing him in that role (he’s now retired) gave her a special understanding of the difficult jobs that law officers have to do, something she keeps in mind even during the nationwide conflict over systemic racism and instances of police brutality.

“My dad was a law-enforcement ranger the whole time I was growing up,” she said. And while park rangers’ jobs are sometimes perceived as involving little conflict, that isn’t true. One time Whitehead was attacked by a drunk man with a knife while on duty. “Fortunately, he had the training and experience to handle it without shooting,” Samulski said.

“We need to let our officers do their job,” she said. “I recognize how lucky we are to have what we have here. But there is also an issue of inequality that needs to be addressed, and empowering people will help.”

Samulski has a bachelor’s degree in anthropology from Fort Lewis College and a master’s in new directions in politics and public policy from the University of Colorado at Denver.

She led the process that resulted in a 2008 update of the City of Cortez’s comprehensive plan, and from 2011 through 2018 she worked with FireWise of Southwest Colorado (now called Wildfire Adapted Partnership), helping local residents reduce their risk of wildfires.

In 2015 she began the Dolores Watershed and Resilient Forest (DWRF) Collaborative, a group that works to improve forest health and the timber industry. She was one of 14 recipients nationwide of the National Wildfire Mitigation Award in 2017.

Samulski, who is married with two sons, is presently the executive director at Fire Adapted Colorado, a statewide network.

She said she believes Montezuma County is far better prepared against wildfires than it was 10 years ago. ‘We’ve had a number of big fires in the last 20 years, and every time we’ve figured out how to make it better. The people on the preparedness and prevention side are doing very well generally.” She said the rate of human-caused fires is very low in the county because people are generally knowledgeable and cautious about burning. 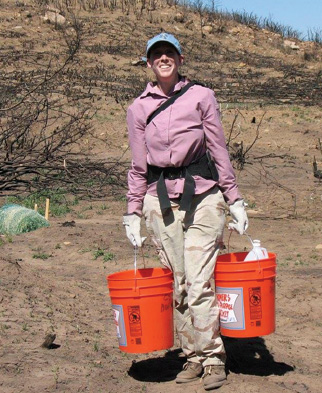 Rebecca Samulski was instrumental in planning
Weber Fire recovery projects with private landowners in 2013. Here, she hauls water to some of the more than 2,000 saplings newly planted on six properties. The effort involved a number of agencies and more than 70 volunteers. Photo courtesy of Pam Wilson.

However, there is still much more to be done to prevent the sort of disasters occurring across the West this summer, she said. She is concerned that the county is considering eliminating from its land-use code a requirement that most new subdivisions must have a comprehensive wildfire mitigation plan.

“There are lot of communities that have gotten work done because of that requirement and I think it’s making it safer. I understand some of the obstacles to the implementation of it, but instead of throwing the baby out with the bathwater, we need to keep working to make it better.”

The county will take up some of its proposed changes to the land-use code at its regular meeting Sept. 22. Among them are reducing the minimum lot size from three acres to one acre everywhere but in the Dolores River Valley, and changing some setback requirements.

Samulski said she doesn’t believe any of the proposed changes would have major impacts overnight, but she doesn’t think most of them are good ideas.

“They’re simple fixes with benefits to short-term interests, economic interests, and they don’t consider the overall look and feel of our county,” she said.

There are indeed places where one-acre lots could be allowed quite reasonably, but allowing them county-wide, even outside the Dolores River Valley, would not be wise, she said.

There are places, such as just outside municipalities, where smaller lots would be fine, but not everywhere, she said.

“There are ways to do adjustments to lot sizes, through PUDs [planned unit developments] or within the one-mile sphere from a town, where you have the ability to have more city-like infrastructure, and I think that makes sense. There are places in the county where you could allow higher density. But I don’t think it makes sense that across the board, anywhere you want, you can request one-acre lots.”

Land use is a critical issue to her, she said.

“Land is one thing we’re not going to have any more of in Montezuma County. It seems like we are going to have more people. Growth for the sake of growth is not necessarily a benefit.”

Residential development is not equal to economic development because it actually costs governments more to provide services to increasing numbers of homes and people than is gained from taxes, she said.

“There is a ton of growth pressure on our area because it is very desirable,” she said. “However, a lot of people moving here expect there to be town amenities similar to where they came from – broadband everywhere, paved roads with broad shoulders, a fire hydrant on every corner – that our rural community is not going to be able to meet. There are places here that do have those amenities and that’s where more development can occur.”

The idea that one-acre lots will provide more affordable housing, which has been voiced by some supporters of the change, isn’t really valid, she said.

Samulski said what is driving the cost of houses up in the county is well-heeled people moving in from outside who are willing to spend a lot for homes. “In the last year we’ve seen people buying houses here above and sometimes way above the asking price,” she said. “Those prices are not attainable on the wages people make in our area.”

One thing that would help, she said, would be to support the local timber industry. “I think there is a huge opportunity for us to be working on what the timber industry is doing locally with cross-laminated panels. If we can build on some of that business here, we have the potential to use a lot more local material. That could cut costs because of the decreased transportation.”

The county appointing citizens’ working groups to deal with issues such as the land-use code and other concerns would also be an excellent move, she said.

“In these crazy times we’re going to be looking at drastic budget cuts for the state, the county, municipalities and special districts. We have super-high unemployment rates and people needing food assistance. The only way to get through that is if people concerned about certain issues are supported and empowered to work on those issues – not just three people [the commissioners] and staff. “

With the coronavirus pandemic and the ailing economy, working together is the only way to move forward, she believes.

“That’s what I’ve been doing since I started working on the city comprehensive plan – bringing people together on common concerns and complex problems.”

She cited DWRF, the Montezuma Orchard Restoration Project and the Sharehouse food project in Cortez as examples of people working together to better the community.

Other issues Samulski considers critical include:

If elected, she will work full-time as a commissioner, she said. “I hope to be engaged in many community organizations as a part of that, but not in any paid role for anybody else.”