A few years ago, Alfred Hughes would not have imagined he would be running to be a Montezuma County commissioner.

But that was before a neighbor proposed expanding a commercial warehouse in the quiet rural area south of Mancos.

When the county commissioners approved the expansion, Hughes and his wife, Debra, along with several others, brought suit against the county and the warehouse owners.

Eventually they won a decision from the Colorado Court of Appeals stating that the warehouse expansion was contrary to the Montezuma County land-use code. 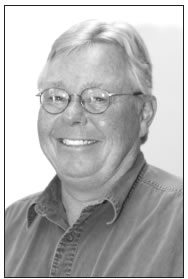 That propelled Hughes, 55, into the public eye and eventually into the race for commissioner. He is running as an independent, seeking to unseat Republican Gerald Koppenhafer.

“I’m not doing this because I’m political,” Hughes said. “I was never politically active before, except for writing letters. But people approached me and said, ‘We want you to run. Things can’t continue the way they’re going’ It became a responsibility.”

He isn’t running because he needs the work. “I have a job I love,” said Hughes, who is with Xcel Energy. If elected, he plans to keep that job. He says it won’t be a conflict because Xcel encourages employees to become politically involved, he has earned a great deal of time off, he has a reliable crew, and his position doesn’t require him to be in an office during any particular hours.

Hughes says his qualifications include years of experience managing personnel, budgets and regulatory issues for Xcel, as well as experience facilitating and leading meetings.

Since his experience with the warehouse controversy, Hughes has become passionate about flaws he sees in the county’s land-use policies. He believes the land-use code is not clearly written and fails to provide needed protection for landowners, which has resulted in a flurry of recent controversies over development proposals and spawned lengthy, heated public hearings.

“I think if you have clarity in your land-use regulations, the process would be streamlined,” he said.

Hughes believes that lack of clarity has resulted in a hodgepodge of uses out in the county and widespread confusion about what is actually allowed under the code. Montezuma County has a unique zoning system called LIZ, for landowner-initiated zoning. When the code was adopted in 1998, landowners were asked to state their own zoning preferences within a certain window of time, but many did not.

Hughes believes the “unzoned” designation should be done away with. “LIZ ended in 2000. If you didn’t zone yourself during that window, you’re supposed to be zoned into your current use. Calling things ‘unzoned’ seems like an attempt to continue LIZ for how many centuries, I don’t know.”

“I don’t want somebody staring over my shoulder and telling me how to build a chicken coop, but private property rights come with private property responsibilities, and it goes beyond the fence line,” he said. “That’s where government and people come in to create reasonable, not overly restrictive regulations to allow for best uses that don’t compromise the quality of life for your neighbor and the community.”

Hughes, who attends most public hearings involving land-use controversies, was particularly critical of the current commissioners for voting to allow small-lot (3-9 acres) zoning on 160 acres on Granath Mesa north of Dolores. The development proposed there, known as Summerhaven, would rely on wells and cisterns for its residential water.

“I don’t think water is being considered the way it needs to be, when it comes to residential development,” Hughes said. “We live in a desert. Allowing development without a physical water supply doesn’t make sense. If everybody’s living off a cistern, who has priority at the water dock — the retiree in his second home, or the original use, which was to water stock?”

Summerhaven is in limbo at the moment because a lawsuit has been filed against the developers and the county. “We’re back in litigation,” Hughes said. “We’re spending a lot of time in the courts when we could be working to build a community.”

Hughes, born and raised in Denver, said he decided when he was 8 and first visited Mesa Verde that he wanted to live in the area. He has lived in Montezuma County for 16 years, after residing in various other places around Colorado. He said he would love to see economic development bring prosperity to the region, but believes the land-use code is hampering growth.

“The lack of clarity and the lack of predictability have discouraged people from investing in this county,” he said. Potential owners of commercial and light industrial operations don’t know where they can build without ending up in the courts.

However, Hughes said he isn’t advocating big growth. “I don’t think that’s what I’m about at all,” he said. “It’s intelligent growth. I strongly believe you can plan for the future, so that’s one of the issues that separates me from the incumbents.”

Hughes doesn’t find himself in agreement with the current board very often, but he said he agreed with the decision to seek an injunction to halt the failed Rally in the Rockies motorcycle rally in 2006. More recently, he supported the board’s decision last month to make the owners of a lot in a residential subdivision seek a zoning change in order to site a propane-storage tank there.

In both cases, however, the decisions took too long, Hughes said. “It seemed like a struggle to decide something that’s fairly clear,” he said.

Hughes echoes other critics’ calls for revamping the commission meetings. Topics “of high public interest” should be discussed at night, he said, and in a bigger venue.

“Having these discussions in a cramped room that’s not large enough to accommodate them is not good business. I have to believe it’s intentional. There’s no good reason they couldn’t be held at the county annex with an audio system.”

Hughes also is highly critical of the way the commissioners, staff and guests sit around a table rather than along one side.

“We’re [the audience] talking to the back of people’s heads,” he said. “You can’t get good minutes or good audio recordings of the hearings. [Commissioner] Steve Chappell doesn’t speak loud enough to be heard.”

He also believes the commission is borderline rude during public hearings. “I can’t think of one occasion where they’ve thanked somebody for their input,” he said. “I never felt like my input was welcomed.”

Hughes also criticized the commissioners for not appearing at more public functions. “Why aren’t you meeting with the community if you are claiming to represent them? Why aren’t you at the Memory Walk?”

He reiterated that he will have time to carry out a commissioner’s responsibilities while also doing work for Xcel. “I’ll do whatever it takes. I don’t see any conflicts. If I’m elected I promise to have a space some place and hours when people can come express their concerns. Or I’m in the phone book. Pick up the phone and call me.”