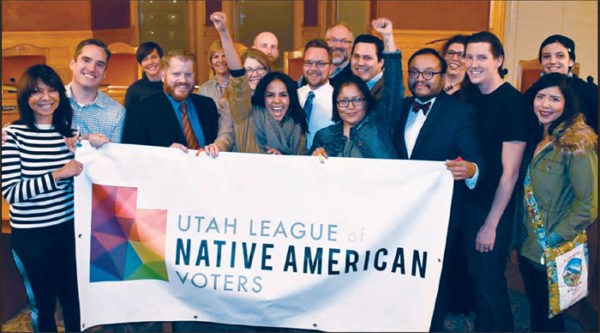 In 1992, Berkeley, Calif., became the first U.S. city to replace Columbus Day, a national holiday held on the second Monday in October, by declaring Indigenous Peoples Day in its place. The city was the first to officially recognize the legacy of indigenous people who lived in North America long before Columbus landed in the Bahamas in 1492.

During the 25 years since, 42 cities, two states (Minnesota and Vermont) and the institutions of Brown, Cornell and the University of Utah followed suit, all celebrating the Native American presence on the continent prior to the Eurocentric colonization.

Farmington, N.M., joined their ranks on Sept. 26, when Mayor Tommy Roberts announced the proclamation of Indigenous Peoples Day during the city council meeting. “I read it and handed it to [Navajo Nation] Shiprock Chapter President Chili Yazzie,” he said in a telephone interview. “It was the right thing to do, an opportunity to recognize the historical and current contributions of the Native people in our community.”

The proclamations shed light on the accuracy of the historic account that Columbus “discovered” America, while questioning the heroism of the Italian-born explorer in light of the genocide he inflicted on Native tribes.

Columbus Day was set by President Franklin D. Roosevelt in 1937. Originally observed on Oct. 12, it was permanently set at the second Monday in October in 1971.

Unlike the groundbreaking Berkeley declaration, most other declarations do not replace Columbus Day, but designate the same day as Indigenous Peoples Day as well, enabling simultaneous celebrations.

The chance for Farmington to do the same was brought to Mayor Roberts’ attention in November 2016 when a group of students from the Native American Club at San Juan College in Farmington met with him about a city declaration.

“Although I was willing to consider the declaration, I suggested they come back after the first of the year. We could plan to introduce the proclamation so that it wouldn’t conflict or be confused [in the public perception] with other indigenous population days.” He explained that the United Nations declared Aug. 9 as International Day of the World’s Indigenous Peoples in 1994, a day that is now very popular and celebrated by many countries around the world.

In addition, some of the other city and state declarations on the same second Monday in October are titled Native American Day. The intent is the same, but the names are slightly different.

The college students didn’t come back, Roberts said, but in early September Yazzie brought the topic up again.

“The mayor talked about declaring a day different than Columbus Day, the day before or the day after, which would be disappointing,” Yazzie told the Free Press. “I said I would not be a part of that decision because it would be a cursory effort. Although our meeting was a bit contentious, a week later he called back. He had thought it through and decided to go with it, declare Indigenous Day on the same day as Columbus Day.”

Roberts did not want to purport to abolish or replace Columbus Day. “Because it’s a national holiday we don’t have the authority, but after considering the significance of the Native American point of view I was willing to consider a proclamation that declared Indigenous Peoples Day on the same day as Columbus Day.”

Yazzie says it is a positive step toward building greater communication and collaboration between the communities.

“The proclamation prepares us to dialogue with the intent of bringing our communities to some parity, for the sake of justice and humanity. No doubt there will be opportunities if we are to partner in the effort to achieve this.”

A joint referendum declaring the second Monday in October as Indigenous Peoples Day in Salt Lake City, Utah, has been introduced in the city council by Councilman Charlie Luke, District 6. 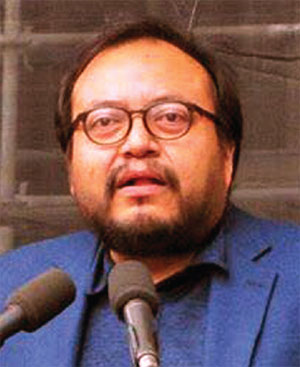 Salt Lake City is home to the University of Utah. The city represents a tight urban environment, packed into only five square miles. Moroni Benally, Diné, Tohlikan Chapter, director of the Utah League of Native American Voters, moved to the city about two years ago from his home in the Navajo Nation after working as director of the Diné Policy Institute and vice president of government affairs and public relations at Diné College, in Tsaile, Ariz. He was also the executive director for the Navajo Nation Division of Natural Resources.

Benally told the Free Press that the League of Native American Voters has worked hard to develop a good relationship with local government and multi-cultural engagement in Salt Lake. “We’ve expanded outreach collaborations between numerous groups representing people of color and are now able to mobilize community members around issues.”

Although the group addressed Indigenous Day with the state in 2016, it was too soon, he said. The legislative measure failed in the Utah Senate.

But in September he saw an opportunity to try again when the Charlottesville, Va., alt-right march opened a divisive moment in U.S. race relations.

In the aftermath, confederate statues were toppling and the focus turned to condemning white supremacy. Erroneous interpretations of history came to the fore, he said.

“We can no longer hold up fictional and sanitized versions of history, including the Christopher Columbus story. Given what’s happening, it’s coming down. Charlottesville seemed like an opening to address Indigenous Day legislation with the Salt Lake City council. They’ve made overtures to some recent Native issues including support of Standing Rock last year,” he explained.

Benally thanked Luke and other council members who have worked with him to bring the issue to a vote October 3. “I anticipate that it will pass,” he said.

The Farmington proclamation was attended by members of the neighboring Native communities. After the declaration, Yazzie thanked the mayor.

“This [proclamation] is recognition of a great egregious wrong that was done to the Native people of this western hemisphere,” Yazzie said. “With great deliberateness, [Columbus] smashed our indigenous world with annihilation and forced subjugation. … we did not have to be slaughtered. …Columbus is not a man to be celebrated; his reputed accomplishment is overshadowed by the atrocities that he perpetrated.”

Yazzie explained later to the Free Press that the education Native tribes can offer to enlighten people helps everyone.

“I think Farmington Mayor Roberts did some of his own research on the atrocities Columbus inflicted on the Native American people. That may be part of the growing shift in consciousness. People are checking facts for themselves, being more objective while looking back at historic events,” he added.

Although there has been no pushback yet in Salt Lake City, Benally expects that it could erupt quickly on social media and in rallies as they get closer to the October 3 vote.

“One of the biggest issues around Christopher Columbus in Utah is the expansive heroic role it is believed Columbus played in fulfilling Mormon prophecy, his presence in Mormon theology.”

Benally, a member of the Mormon Church of the Latter Day Saints, explained, “The legacy teaches that God inspired Christopher Columbus to open up the Americas for the gentiles in order that the church could found the Restoration.” It is a quiet but very potent belief and could impact a declaration such as Indigenous Day, he said.

But in Farmington the Sept. 26 proclamation came about without incident. There was really no dissent at the city council meeting, said Mayor Roberts. When Yazzie received the proclamation, he reminded the audience that “the struggle between our communities brought about by racism, discrimination and murder of family members cannot be healed by such a proclamation. I don’t bring this up to aggravate anyone, only to say that we must accept the dynamics between our communities, good and bad.

“Our challenge is to have us use the mayor’s proclamation as a catalyst to greater communication and collaboration for the mutual benefit of our communities and the future of our grandchildren.”