Gerald Koppenhafer knows there are flaws in Montezuma County’s landuse code. But he doesn’t believe they are fatal ones.

“As far as the land-use code, I don’t think there’s a major problem,” Koppenhafer, the current chair of the county commission, told the Free Press.

“When you go to these CCI [Colorado Counties, Inc.] meetings and talk to other county commissioners, I can tell you, we have a lot less of a problem than many of them do.

“I don’t think there’s that much wrong with our system right now.” 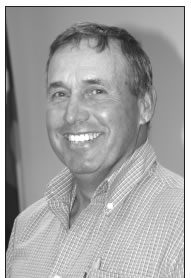 Koppenhafer, a Republican from Mancos, is running for re-election. He faces challenges from two independents: Alfred Hughes and Paul Young.

Koppenhafer is also a large-animal veterinarian who gives most of his interviews by cell phone while traveling around the county. Plain-spoken and direct, he is a staunch conservative who advocates for private-property rights but has also worked to accommodate the concerns of a very vocal contingent concerned about land use.

In the 1990s, Koppenhafer served on the citizens’ working group that helped create the county’s zoning system, known as LIZ, for Landowner-Initiated Zoning. LIZ allowed landowners to zone themselves into large-lot agricultural zones, or to express a preference for smaller lots, within a certain time period, which ended in 2000.

LIZ has proven to be controversial, and many county residents have said the county needs stricter zoning and stronger land-use regulations. Koppenhafer disagrees.

“Back when we started doing a comprehensive land-use plan, there was this big talk that we were going to have 35,000 people here by 2000. We didn’t even get close. [The county’s population is about 26,000.] Personally, I’m not sure it’s ever going to happen. Our growth has been at a pretty steady rate.

“I just don’t think it’s that bad of a system. The worst problem I think that’s happened is it’s never been actually enforced. A lot of things have happened that should have been zoned and weren’t.”

Koppenhafer has been a vocal advocate of consistency in enforcement of existing regulations. In recent months the commissioners have ordered a landowner not to hook up a 30,000- gallon propane tank without getting permission from the county and told another landowner to cease and desist from building commercial storage units until he got approval.

The commissioners in 2006 went to court and obtained a preliminary injunction to shut down a motorcycle rally because the organizers were operating without a high-impact permit.

“We’re trying to actually follow every step in that land-use code and do everything that it says. We’re trying to make every part of it be in effect, and that hasn’t been done in the past.”

Indeed, some of the problems the commissioners have been dealing with were inherited from previous boards.

For instance, the county is being forced to buy land that was leased by the county in the distant past and used as a landfill, now abandoned. “Why they would put a landfill under leased ground — to me that’s crazy,” Koppenhafer said. But, because of liability issues, the county now has to acquire the land rather than let another private owner have it, with its potentially toxic residue.

And a major appellate-court decision that went against the county in November 2007 involved a permit for expanding a commercial warehouse on agricultural land that had been granted in June 2004 by three different commissioners. One of Koppenhafer’s currrent opponents, Hughes, was a plaintiff in that case.

“I wouldn’t argue with those people [the plaintiffs],” Koppenhafer said. “In actuality, the commissioners should not have let [the warehouse owner] expand there to begin with. The court was right, as far as I’m concerned.”

However, he disagrees with a more recent decision by the Colorado Court of Appeals, which again ruled against the county in a case involving a gravel pit that had been approved on ag land in the Lewis area. A neighbor, Chuck McAfee, appealed the approval, saying the county was not following its own land-use code and was using the highimpact- permit process to allow all sorts of uses on ag land. The court agreed, but Koppenhafer said the decision rested on a technicality involving the fact that the conditional uses allowed on ag land were listed in a separate chapter of the code from the zoning section.

The county is currently being sued for a decision made on March 10 of this year, when the board voted 2-0 (Koppenhafer was one of those votes) to approve high-density zoning for a future subdivision on Granath Mesa, north of Dolores. The subdivision would not have a domestic water supply beyond wells and cisterns, and neighbors had argued it was inconsistent with the large-lot character of the neighborhood.

Critics have charged that all the litigation is a sign that the land-use code is seriously flawed, but Koppenhafer said that’s not so.

“You can have any one of those codes and you can still end up in court,” he said. “As far as the number of lawsuits, we’re not even close to most counties. I can guarantee you that’s true. We’re not even close to La Plata County. Every county you talk to –they’re all in the same situation.”

He does admit there is widespread confusion about LIZ, with many county residents believing that because they chose to stay “unzoned” during the allotted sign-up period, they now can do whatever they want with their land. In fact, once the time limit expired, the unzoned properties were essentially zoned into their current use, and owners must get approval to change that use.

“Most people don’t understand that,” Koppenhafer said. “ ‘Unzoned’ is a classification, and if you try to change anything you’re doing, you’re going to have to get permission.”

Beyond land use, Koppenhafer said the county faces a number of other challenges. The biggest may be booming natural-gas development, he said.

“It could be a huge impact to this county,” he said. “Roads — you can make the companies do some improvements going to the well, but when you start having that many big trucks all over the county, and the number of opeople moving in to work on those wells, it will affect everybody in the county.

“You have to provide more emergency services, law enforcement — it’s a huge impact.”

Another potential problem is the restructuring of the way state Department of Local Affairs monies, particularly energy-impact grants, are allocated. In the past, rural counties and municipalities with a lot of energy development could obtain funds for a variety of uses, including things as disparate as new sewer lines and welcome centers. Now, the state is changing the way the money is doled out, and Koppenhafer worries it could mean Montezuma County doesn’t see as much grant money as it needs. The county has no sales tax except for a half-cent that goes entirely to the jail, so it is dependent on property taxes and grants for its revenues.

An ongoing challenge is finding ways to squeeze a growing county government and court system into aging and too-small structures such as the courthouse. The county is having an energy audit done to find ways to cut costs in the historic building. “We have to do something with the old windows,” Koppenhafer said. “In the winter it’s like the wind is blowing through one side [of the commission meeting room] and out the other.”

The meeting room has become something of a bone of contention as well. Public hearings can draw close to 100 people, too many for the room to accommodate comfortably. And the main table is set so some officials and visitors have their backs to the audience.

Critics have called for night meetings in a venue such as the county annex.

“We’ve talked about that, but the sound system over there is terrible,” Koppenhafer said. “And if you get into us having meetings of an evening, we have to have the staff there to go get this or that, and you’re not going to have the ability to do that.”

The commissioners did try holding a meeting from 7 to 9 one night a couple years ago, he said, “and by 8, everybody got up and left.”

Also, the regular meetings often last from 9 to 5. “I don’t know what time we’d get done at night,” he said.

Koppenhafer said many people’s impressions of county government are based mainly on the contentious public hearings over land-use issues, which may give some skewed impressions.

“There’s a lot more to running the county than those public hearings, I can tell you that,” he said.