Disputes over land use are frequently bitter, but a Dec. 15 hearing over the future use of one lot in a residential Montezuma County subdivision may have marked a new milestone: Two sheriff’s deputies were present as a precaution against possible trouble.

Nothing untoward happened and the hearing before the county commissioners went off peacefully, but the fact that officials felt compelled to ask that the deputies be there was an indication of how heated this particular argument had become. 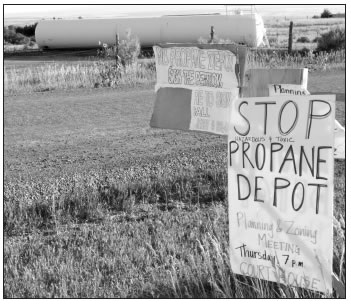 This AmeriGas propane-storage tank, pictured at a lot in the Swanner subdivision near highways 184 and 145 but now at another location, prompted a bitter dispute over what types of uses could be allowed within that residential subdivision. Photo by Wendy Mimiaga

The commissioners voted 3-0 to grant commercial zoning for a 19-acre lot in a four-lot subdivision owned by Richard and Marie Swanner at 27999 Highway 184 — despite opposition from some neighbors and other citizens.

The controversy began when an AmeriGas propane-storage tank was placed (but not hooked up) on the lot in the spring of 2008.

No commercial or industrial use for the lot had been approved by the county at that time, and neighbors complained, coming to the county commissioners on May 27 with angry comments about their views being ruined and the Swanners not following the county process. The Swanners, meanwhile, maintained that commercial uses were “grandfathered” on that lot.

The commissioners sent the matter to the planning commission, which had a brief public hearing on July 24 to decide zoning and/or use on the tract. At that time the board said the property was zoned A/R ES, a designation for subdivisions that were approved prior to the adoption of the county land-use code in 1998.

This left the question of commercial uses open.

On Sept. 8, the county commissioners had a lengthy public hearing before a packed room to decide the current zoning and/or use of the tract. A dozen people spoke against the propane tank, and others sent letters opposing it. The mood in the room was contentious, with some people calling for the Swanners to produce their property- tax records to show how the property was being used. One man persisted in mispronouncing the Swanners’ name; one called for the commissioners to have a “private meeting” to decide the matter, something they swiftly rejected.

The commissioners eventually decided that the lot did not carry “grandfathered” commercial zoning and the Swanners would have to apply for it if they wanted to do anything on the property beyond its historic uses, which included various kinds of storage and a helicopter landing pad.

The commissioners also advised the Swanners and their attorney, Mike Green, that they did not think it likely that a 30,000-gallon propanestorage tank could be considered a commercial (rather than an industrial use). AmeriGas took its tank elsewhere but the feud raged on, leading to an alleged confrontation between Richard Swanner and a neighbor during which, according to a sheriff’s report, Swanner was cited for menacing after the two argued over where Swanner could drive his tractor. Charges were later dropped.

The planning commission held a public hearing on Oct. 23 and voted 6- 0 to recommend against commercial zoning for the lot.

The Swanners took their case back to the county commissioners on Dec. 15. Green argued that the original subdivision plat and covenants state that Lot 4 is a “commercial/residential” lot, and that the area where it sits, near the intersection of highways 145 and 184, already has many mixed uses, including businesses.

Green said commercial zoning would clarify for the Swanners what they could do on the property. “What I am concerned with is, any time they park a vehicle there or any time Mr. Swanner does anything, there will be questions whether what he is doing is valid or invalid,” Green said.

Swanner said he has few options for using the 19-acre tract because there is no water available for livestock use, it isn’t farmable because of size, and a canyon takes up about 13 acres of it. About a dozen citizens spoke or sent letters arguing against the zoning change, however.

Neighbor Rich Lee said he didn’t see any problem with people storing things on residential property. “My personal observation of this county is that there are hundred of similar properties, even one in my own subdivision where there are two large water trucks parked, and we haven’t taken any issue with that,” Lee said.

Jerry Giacomo agreed and said that although there are other commercial activities in the area, they are on unzoned property. The nearest commercially zoned property is a storage unit 1 1/2 miles away, Giacomo said.

Several people voiced concern that it would set a precedent to zone a tract commercial for the purpose of allowing the landowner to store things on it.

“Storage of materials, parking of equipment and sale of family or farm vehicles do not make a property commercial,” said Sally Cole, a neighbor. “Residents use their property like this all over the county and in other rural parts of Colorado and numerous people, me included, run small businesses out of their homes. We do not want our property re-zoned as commercial and surely the commissioners do not want to begin forcing that process.”

Neighbor Phil Kemp, reading from a letter he had written, said, “My particular concern with this proposal is the contention that the Swanners’ historic commercial use on Lot 4 might justify a zoning change from residential to commercial. . . .

“There are many other landowners who could use this same argument if they wished to have their property rezoned. This could effectively lead to spot zoning.”

Others said they did not think the county should grant a commercial designation without being told what the proposed use would be, noting that the land-use code speaks of rendering a decision “on the proposed use.”

“You have to have some idea of what is going to be done in order to evaluate what should be done,” said neighbor Charles Cole. “‘We’ll let you know’ doesn’t count as informing the commissioners of the intended use.

“The land-use code pretty clearly contemplates that you know what pig is in the poke that you’re buying.”

Lee agreed. He said he wants assurance there won’t be a “ three-story insane asylum” on the site, “which we probably all qualify for now,” he added, to laughter.

Green said the remark was “inappropriate” and the issue of future use was not relevant at this point.

“It’s relevant to me,” Lee responded. “It’s relevant as heck to me because what are the pathways available to me to protect these rights that I hoped this commission would support?”

But Commissioner Steve Chappell said, even with commercial zoning, the Swanners will have to apply for a highimpact permit if they want to launch any operation that exceeds threshold standards for factors such as traffic, building size, and more.

“People are concerned about what’s going to happen but whatever happens has to go through a process anyway,” Chappell said.

Green agreed, saying the county would have more control over what happened on the tract by zoning it commercial.

Several people asked whether, if the Swanners contended that the historic use of the tract had been commercial, they were paying property taxes at a commercial rate.

Swanner said no, the assessor’s office had been taxing it at the lower, agricultural rate. “I figured if they seen something on there they would have taxed me appropriate,” he said.

Commissioner Larrie Rule commented, “I can’t figure out why if you’ve been paying agricultural taxes on it you want to change it, but I feel like Mr. Green does, we would have more control if it was zoned commercial.”

The board then voted to grant the commercial zoning.

In a post script, on Dec. 29, the commissioners approved a high-impact permit for AmeriGas to house the 30,000- gallon propane-storage tank at 29296 Road J.25 on the south side of Highway 160, in Lot 2 of the Fairgrounds PUD, where the zoning is industrial. Giacomo and Greg Kemp thanked AmeriGas and the county for moving the tank from the Swanner subdivision.

But the Swanner issue has not necessarily been laid to rest — depending on what commercial venture the landowners eventually propose for the infamous Lot 4.