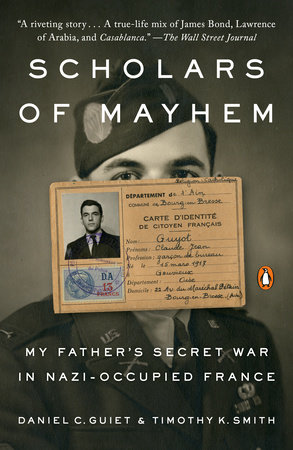 Durangoan Dan Guiet gave his father, Jean Claude Guiet, a computer as a birthday present 25 years ago and asked Jean Claude to record his life story on it. Jean Claude began to type, but only after giving explicit instructions that no one was to read his writings until after his death.

Jean Claude died in 2013 at age 89. Only then did Dan become privy to his father’s story, one of the most sensational true tales ever to come out of World War II.

Dan has teamed with journalist Timothy Smith to tell his father’s story in Scholars of Mayhem, released in June by Random House/Penguin. Dan will appear at Maria’s Bookshop in Durango on Sept. 26 at 6:30 p.m. to recount his story of researching and writing Scholars of Mayhem over the last six years, and share tidbits from his father’s death-defying exploits behind enemy lines.

As a 20-year-old special agent fluent in French and schooled in radio communications, Jean Claude parachuted into German-occupied central France at the outset of the Normandy invasion in June 1944 with three other agents. The four-person team was charged with organizing the French resistance to the German occupation and radioing back to England specifics of German troop movements in the region.

At the time, the Germans tracked clandestine radio transmissions in France, then shut down sections of the power grid one at a time until the radio transmissions ceased, pinpointing the locations of transmission posts like the one Jean Claude was tasked with operating. Jean Claude’s lifespan therefore was expected to be roughly three weeks from the date of his insertion into France. However, the bright, young French-American agent — who had left his freshman-year studies at Harvard to enlist in the war effort — fashioned his own electric generator from a water wheel in a defunct, stream-side grain mill in the French countryside, and thereby avoided detection by the German patrols for two harrowing months.

During those months, Jean Claude and his fellow agents organized, supplied, and commanded French resistance fighters in a series of brutal attacks against the German occupiers, and against a powerful Panzer armored division attempting to reach the Normandy front and train convoys transporting enemy reinforcements to the front. As the size and scope of the attacks mounted, Jean Claude used his secret radio to call in nighttime drops from across the English Channel of arms, ammunition, and plastic explosives to the French freedom fighters.

Jean Claude’s transmission post eventually was discovered and a German patrol roared up to the grain mill. Jean Claude fled through a back window and continued to fight with the French resistors until the liberation of Paris in September 1944, four months after he entered the country. He made his way back to America later that fall, and from there to China and Burma, where he fought until the end of the Pacific theater of World War II in September 1945. After the war, he joined the then-fledgling CIA. Living and traveling abroad with his family as cover — Dan included — Jean Claude mounted covert operations around the world on behalf of the U.S. government.

In the years ahead, Dan plans to write two more books on his father’s life, one covering

Jean Claude’s exploits in China and Burma, the other his cloakand- dagger work for the CIA.

Scott Graham is the National Outdoor Book Award-winning author of the National Park Mystery Series for Torrey House Press. The fifth book in the series, Arches Enemy, was released in June, and is available at Maria’s Bookshop in Durango and other area bookstores, and for order at scottfranklingraham.com.