The Four Corners has among its populace an emerging science-fiction writer. Hans Christian Hollenbeck’s self-published novel “Highpoint” was released two months ago, and has sold nearly 1,000 copies.

“I first got the idea for this story eight years ago in the back yard of a friend’s house. It was 4 in the morning, and we were watching a meteor shower. I thought how cool it would be to travel into space with simply the power of thought,” Hollenbeck said. 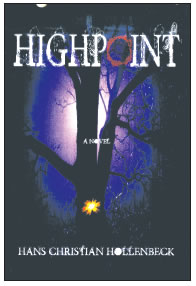 “Highpoint” is a first-person account told by Chris Wyer, whom we first meet as a youth growing up with his younger brother under the guidance of a single father.

Wyer’s world drastically shifts when his brother suddenly dies. Wyer’s adolescent way of coping with this tremendous loss is to become an angry, unruly bully.

A favorite target of his aggressive attacks is a skinny, quiet kid named Leonard Caldwell.

Wyer’s self-destructive bent nearly kills him and Caldwell on a rainy night when the two wind up together in Wyer’s car. But Caldwell saves him.

As we approach the end of Part 1, we, along with Wyer, are perplexed by how exactly it was that Caldwell saved Wyer’s life, and by the new relationship the two have moved into.

Hollenbeck uses his own childhood as the framework for Part 1 of “Highpoint”: “I wanted this story to feel real, and touch people on an emotional level so I wanted to touch myself on that level,” he said.

Hollenbeck and his younger brother grew up in Ridgway, Colo., and were very close. Hollenbeck said, “I knew I had to hurt myself on the inside while writing this part, so I imagined what it would have been like to have my own brother die.”

Part 2 of “Highpoint” drops us in on a middle-aged Wyer, who has married the woman of his dreams, fathered a daughter he adores, and landed a job that supports his family.

He’s very cozy in his life, and then one day he receives a coded letter written completely in blood. The story picks up a frantic, desperate pace at this point, moving rapidly through twists and turns that keep the reader guessing.

The drama leads Wyer to deeply affirm within himself that by far the most important thing to him is the intimate, loving relationship he has with his family.

Hollenbeck wrote “Highpoint” as a 21-year-old who had just fathered a daughter and was still trying to understand the relationships in his life. “I was able to deepen and strengthen the relationships I have with my family, daughter, and friends through the process of writing this book,” he said, and paraphrased the Beatles: “The love you make in your life will be equal to the love you take.”

Hollenbeck has several important messages to convey throughout “Highpoint.” He says, “One of the tricks of life is trying to know yourself.”

“‘Highpoint’ is a representation of itself. As the story grows, and as Wyer grows, the book grows too,” Hollenbeck says. He purposely, subtly shifts his writing style in the book in order to represent this.

“It took me eight months to write the book,” he said. “I was working a lot at the time and would come home and shut myself in my room and write. Writing the book was a way for me to process some of the difficult relationship issues I was having in my life at the time.”

After finishing the novel, Hollenbeck let it sit in his computer for four years and pretty much forgot about it. “Then my aunt who is in the publishing business found out I had written a book and asked if she could read it.”

Her encouraging praise of the book inspired Hollenbeck to resurrect it, and after doing some editing he began sending it out.

“I queried like 250 agents.” He received a reply from 30, and ended up with two that were interested. Both wanted money up front and he told them he wasn’t interested. However, one was very persistent, continuing to contact him, telling him she was sure she could sell his book.

He decided to pay her the requested $300 to sell “Highpoint.”

“I was a little nervous about the whole thing, and was wondering if I wasn’t just flushing my money down the toilet. I had never heard of paying an agent up front.”

It seemed as though his fears were materializing, because he didn’t hear anything for a year and a half. Then one day he was contacted by Xlibris, a self-publishing firm that wanted to print “Highpoint.”

Hollenbeck signed a contract for them to print 10,000 copies; he receives royalties. He says having “Highpoint” see the light of day was one of the best moments of his life.

“If even just one person is touched deeply enough by my book that it improves their life in some way, then I feel I have succeeded. One of my goals with this book is to have a random person I don’t know recommend my own book to me.”

“Highpoint” can be purchased from one of the many on-line booksellers, or Maria’s Bookshop in Durango.

Hollenbeck’s web site is at www.hanshollenbeck.com.