Readers of this column know that we seldom review nonfiction here, but that every so often a title comes along that invites an exception. Such was the case with reporter Steve Inskeep’s Imperfect Union: How Jessie and John Frémont Mapped the West, Invented Celebrity, and Helped Cause the Civil War. Not only did the book’s subtitle promise a fresh look at one of America’s iconic frontier figures, it hinted at the sort of inclusive scholarship so often missing in the Western literary canon. 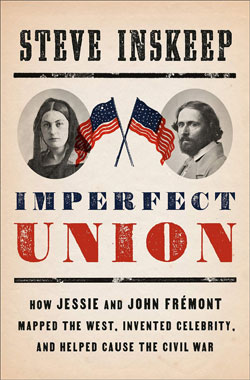 Happily, Imperfect Union does not disappoint on either count. For those unfamiliar with his legend, John Charles Frémont led five expeditions westward during the midnineteenth century, first to map the Oregon Trail, then to explore alternative passages across the Rocky Mountains, and finally to survey potential routes for the transcontinental railroad. With the encouragement and patronage of his powerful father-in-law, Missouri Senator Thomas Hart Benton, and with the intrepid guidance of Kit Carson, Frémont thrust himself to the forefront of the Manifest Destiny movement, the notion that all lands west of the Mississippi were ordained to one day become part of a single United States.

The reality behind the Frémont legend is considerably more nuanced, however, as Inskeep (best known as the co-host of NPR’s Morning Edition) details in this meticulously-researched biography. Impulsive and egotistical, Frémont had a unique gift for turning opportunity into tragedy, risking men and materiel on heedless jaunts into deep snows and pointless digressions. His unauthorized foray into Mexican-controlled California in 1846 precipitated an insurrection by U.S. settlers in Sonoma – the so-called Bear Flag Revolt – that Frémont, camped some eighty miles distant, only learned of after the fact. He nonetheless proclaimed himself military commander of U.S. forces in California, only to be court-martialed in 1847 for disobedience of orders. Resigning his Army commission, Frémont moved to California and purchased Las Mariposas, a vast tract of land in the Sierra foothills that, following the Gold Rush of 1849, made him and his wife Jessie fabulously wealthy.

Frémont won election as one of California’s inaugural U.S. senators in 1849, but served only 175 days in that post before losing reelection. His life thereafter can best be described as a long and humiliating fall from grace. His presidential run in 1856 atop the fledgling Republican Party ticket ended in defeat (to James Buchanan) when even Senator Benton, his former patron, refused to endorse him. Later appointed by President Lincoln as Commander of the Department of the West in 1861, Frémont’s conduct in office, including allegations of financial mismanagement and fraud, eventually led to his dismissal. Post-war failures in the railroad business and mounting legal bills associated with Las Mariposas eventually bankrupted Frémont, who died on July 13, 1890, leaving Jessie dependent on his Civil War pension for her survival.

The portrait of John Charles Frémont that emerges from Imperfect Union is that of a starry-eyed striver whose unbounded ambition vastly exceeded his limited competence. How then to explain the fame he enjoyed during his lifetime, and the legend that yet survives him? The answer in both instances is Jessie Benton Frémont. An enormously talented writer, it was Jessie who co-authored (and perhaps ghostwrote) her husband’s vivid accounts of his frontier adventures – accounts that made him one of the nation’s most recognized and admired men. And it was Jessie’s political acumen that burnished the reputation she’d helped create, time and again injecting her husband’s name into Washington debates over the future of a nation riven by Western expansion and Southern secession.

Both as biography and as history, Imperfect Union ($30.00, from Penguin Press) entertains and enlightens, affording readers a fresh perspective on the political and social upheavals that forged our nation and helped shape our uniquely American culture.