Marching for women’s right to vote

“War will not end war. No matter who wins, everybody loses… War is entirely emotional. It is insanity.”

Jessie Annette Jack Hooper was born on a farm in Winneshiek County, Iowa, on Nov. 9, 1865. Her mother was Mary Elizabeth Nelings and her father was David Hayes Jack, a wealthy businessman who mustered into a unit for Iowa during the Civil War. He married Mary when he returned home from the war. Jessie’s early education was with a governess. 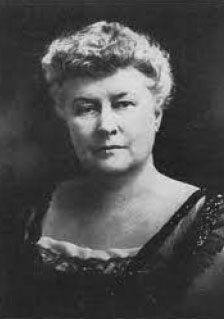 In 1888 Jessie married Ben Hooper, an Oshkosh, Wisc., attorney, who encouraged activism and civic interests. The couple moved to Oshkosh, where she began a new chapter in her life. Even before women were given the right to vote, Mr. Hooper went to great lengths to share his right to vote with his wife. One election he would vote as he saw fit, but the next election he would vote according to his wife’s wishes. One can only surmise that life at the Hooper house was pretty egalitarian and probably full of inter­esting debate and conversation.

The couple had one daughter, Lorna. In 1893 Jessie and her young daughter attend­ed the International Conference for Women in Chicago. They listened with rapt atten­tion to a speech by Susan B. Anthony. Jessie was greatly impressed. She remained a bit shy and reluctant to hold any position of responsibility in a civic organization until, at her husband’s urging, she accepted the nomination to fill a vacancy with the local chapter of the Daughters of the American Revolution in 1908. Despite her reticence, she won the election by a wide margin and subsequently held many other positions of leadership.

She was emerging as an activist and her focus was primarily on improving health-care options and facilities. It was an uphill battle, but one that she fought, and she ob­served that men were reluctant to buy into any initiatives until they had seen success.

“We found men in charge of our city government, while always polite to us, had little interest in what we wanted because we had no votes. I soon got tired of join­ing pilgrimages to officials where we rarely got what we asked for, and decided to con­centrate my efforts on securing the vote for women.”

She eventually joined, with many like-minded women, a variety of progressive movements in Oshkosh. Jessie decided that she was tired of trying to dig a hole with a teaspoon, that what was needed was a steam shovel, so she threw all her energies into the women’s suffrage movement. She was active in the local Women’s Club, the Wis­consin Federation of Women’s Clubs, and was on the executive board of the National American Women’s Suffrage Association. When the marches began she remained active but also re­turned to her home state of Iowa to de­liver the first “street” speech ever made by a woman. She had really come into her own.

From there she went on to Washington, D.C., where she worked alongside the lead­ers of the movement. Together they would eventually help secure the passage of the Nineteenth Amendment, giving women that precious right to vote. The button they had proudly made read:

“I MARCH FOR FULL SUFFRAGE JUNE 7TH WILL YOU?”

Jessie Hooper and her daughter attended the great Parade for Suffrage in Chicago on June 7, 1916. It was held during the Republi­can National Convention. On that day Chi­cago experienced the most dreadful storm, with torrential rains, that it had known in years. The heavens opened and poured non-stop and the wind howled, living up to the nickname “the windy city.” Nevertheless, more than 5,000 suffrage supporters gath­ered to proudly march in that parade. They began exactly at the appointed hour, just as scheduled, and fell in line together, wearing raincoats over their white dresses. They car­ried umbrellas to protect them a little when the wind allowed, which it didn’t often.

Steadily they marched, mile after mile to the Coliseum, where the Republican Con­vention was being held, and they began to pour into the building. Ironically, they were just in time to hear an anti-suffrage state­ment delivered to the convention explain­ing that women did not want the vote! One can only imagine this caused more than one chuckle from the women marching, who were now soaked to the skin. It was a great pleasure on this occasion for Hooper, as she and her daughter marched arm in arm in the same line.

In the morning, she took the train home and was still wearing a button which said, “I march for suffrage on June 7th will you?” A fellow passenger on the train, a man, no­ticing her pin, asked her, “Did you march in that parade?” She replied, “yes.” He then continued, “My partner and I were seated by a hotel window on Michigan Avenue when we heard, in all that frightful storm, a band playing. We knew the fireman’s pa­rade had been called off because of the ghastly weather and we simply could not imagine what it was. Looking out again, my partner said, ‘My God, those women are marching in all this storm, if they want the bloody vote as badly as that, they surely ought to have it!’”

They really wanted the “bloody vote”!

During the fight for the passage of the Nineteenth Amendment, Jessie was elected to serve as president of the National League of Women Voters (NLWV). In this leader­ship role, she worked to promote a variety of laws in Wisconsin, including the equal guardianship law, an increase in mother’s pensions (without an adult male income, the model of military pensions was used, and it was argued that a mother deserved a government pension in exchange for her service to the state through child-rearing), and a law that permitted women to serve as jurors.

In 1922, when she retired from her posi­tion of president of NLWV, she was unani­mously selected by the Democratic Party of Wisconsin to run as their candidate for the U.S. Senate. Her campaign, often hosted in family living rooms, was run by two women, Livia Peshkova and Gertrude Watkins, and was bolstered by women in the press. The campaign rallying cry became “Whoop for Hooper.” Her election platform champi­oned the League of Nations, veterans com­pensation, and world peace. It was an auspi­cious platform.

By this time, she was a grandmother and unpaid secretary and partner in her husband’s business. He was one of only two men who donated any money to her campaign. Nominat­ing a woman was a bold and enlightened move for the party at this time in his­tory, but most likely not terribly popular. While she lost the race to Robert La­Follette, she made history when she se­cured an amazing 16 percent of the vote. Whoop for Hooper!

After her run for the Senate, Jessie continued to remain very visible and quite vocal in the political sphere. As a mem­ber of the League of Women Voters for International Co­operation to Prevent War, she fought vigi­lantly for world peace. During World War I, she was active in Red Cross work, Liberty Loan drives and food conservation. She also chaired the Indian Affairs Committee of the Wisconsin League of Women Voters and was an advocate for Native Americans in general, and the Menominee Tribe in par­ticular. She traveled to the World Disarma­ment Conference in Geneva, Switzerland, presenting a petition that sought the reduc­tion of deadly weapons after World War I.

In 1933 she campaigned for U.S. entry into the World Court. She founded the Na­tional Conference on the Cause and Cure of War. This woman was dedicated, pas­sionate, and worked tirelessly for causes she believed in. We must not leave her in obscurity!

Midge Kirk is a slightly eccentric artist, author, bibliophile and hobby historian. She can be reached a eurydice4@yahoo.com or visit her website http://www.herstory-online.com.