Marshaling the power of mushrooms

For the most part, we want those scraps to go away. But for mushrooms, these things are food – and so a partnership begins. 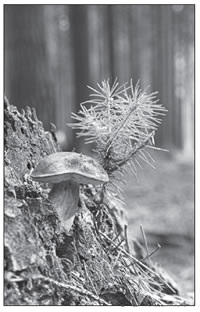 A wild brown mushroom. Fungi of all types are being studied for their potential uses in clean-up and restoration efforts.

There’s a growing contingent of people who swear by the power of ’shrooms, for decomposition of waste and myriad other uses, and one of those people has sprung up in Southwest Colorado.

Katie Holgate, owner of the upstart business Mycological Design, has turned fungi into an obsession. She’s inoculated her vegetable garden with spores, thrown masses of fruiting fungal bodies into her pond as a water-cleaning strategy, and used mushrooms to balance the pH of her naturally alkaline soils. But it’s the work Holgate is doing in the community that has the area perched on the cutting edge of the mushroom movement.

One of her pioneer projects is a partnership with the Durango Coffee Company, to see if mushrooms will grow on finished coffee grounds. That effort got its start when the Durango Compost Company tried to break down the used grounds with worms. Coffee grounds are too hot for the worms, Holgate said – so she endeavored to see if mushrooms would break the grounds down enough to suit the worms.

“What we’ve accomplished is that mushrooms like to grow on coffee grounds,” Holgate said. She added that at full scale, the project will yield Shitake mushrooms to sell to local restaurants interested in cooking with them, so the process becomes self-sustaining.

Holgate is also working with the Southern Ute Indian Tribe’s Red Willow Production Company, which develops gas wells, to grow mushrooms on oil-contaminated soil. The company needs to reduce petroleum hydrocarbon levels in soils near its drilling projects, and Holgate aims to see if mushrooms will help.

And if all goes well with an emerging pilot project in the San Juan National Forest, the hungry little fungi could be enlisted to help break down the waste from the ongoing march of forest restoration work.

Terrain only a mushroom could love

The pilot project in the San Juan is a collaboration between Holgate’s Mycological Design and the Mountain Studies Institute, a Silverton- based not-for-profit mountain research and education center.

Last month, the partnership was awarded $2,000 for a pilot project to use mushrooms to speed up the decomposition time for reseeding in a 6,000-acre plot near the Junction Creek Campground. The area was thinned by hydromowing, whereby a machine is used to chip woody fuel, understory brush and sometimes dying trees. A lot of the chipped material was burned. But on the site where the mushrooms are slated to go, more than a foot of wood chips blanket the ground.

“The concern with that is if there was another fire, those wood chips are fuel,” Holgate said. “The wood chips are small enough that it’s not appropriate to burn them. We’re going to see if we can seed the area and get vegetation to grow. Once we do that, it will be a moist enough environment to where a ground fire wouldn’t happen.”

The mushrooms will be used both to break down the wood chips, and to create a microhabitat that retains moisture to encourage seed germination.

The project will actually cost $10,000, Holgate said, but the initial dollars – from the federal Secure Rural Schools and Community Self-Determination Act, or “Payments to States” – will be used as seed money to seek additional funding.

’Shrooms on a mission

The idea to use mushrooms in restoration isn’t new, but it’s not exactly established, either. One of the pioneers is Paul Stamets, a longtime mycologist in Oregon. He’s written six books on the subject and strongly encourages the discovery and conservation of mushrooms in old-growth forests throughout the Pacific Northwest.

He’s taken his mushroom advocacy to online video forums and national media outlets to push for the use of ’shrooms in a variety of contexts – in permaculture, farmwaste mediation, oil-spill cleanup and the rehabilitation of old logging roads. He also points out that mushrooms, some of them yet to be discovered, are sources and potential sources of novel antimicrobial agents.

A recent study by the Forest Products Laboratory in Madison, Wisc., pointed out the need for surveying fungi in fire-prone areas and harnessing their decomposition abilities to reduce fire hazards. But aside from Stamets, Holgate, and the occasional study like that one, not many people have caught mushroom fever – and there’s scant precedent for using fungi in the arid Southwest.

Hollis Hassenstein is an employee at Native Roots Garden Center in Durango, where Holgate sells a few ready-made, $20 mushroom kits, including spores and supplies for growing mushrooms in home gardens. She says very few people are interested in growing mushrooms at home, because so few people know they can.

Holgate would love to see that change.

Mycological Design got its start last year, and is in every sense a cottage enterprise that arose from Holgate’s efforts on her own land.

“We live on high plains, in sagebrush country. It’s super dry,” she said. “We’re doing a lot of revegetation, planting a lot of shrubs and trees. All the shrubs I’ve planted, I put a ton of wood chips down and inoculate them with mushrooms. “

She said the mushrooms help neutralize the naturally alkaline soils, and she’s noticed a positive response among the inoculated bushes. Her garden showed a similar reaction.

“I’ve also been using it to plant my tomatoes, and my tomatoes did better than everything else,” she said. “They got huge and I have so many tomatoes I can’t even believe it.”

She says the root-associated fungus, called mycorrhizae, with which she inoculates her shrubs and tomatoes works to buffer the roots against environmental stress and aids in the absorption of nutrients from the soil. She usually either adds spores to the root ball as she plants, or mixes them with wood chips she then spreads like mulch.

She said people can purchase kits like hers to get started – but it can be even simpler than that.

“For my Shitake mushrooms, I cloned mushrooms from the grocery store,” she said. “In the fall, I collect oyster mushrooms.” Any mushroom can be grown from its spores, or cloned from its fruiting body in a petri dish, she said.

Holgate said future mushroom aficionados are welcome to call her to learn more about using mushrooms in any of these contexts; her number is 970-769-8682. She doesn’t have a web site yet. But don’t look for a lot of fungal activity out of her home laboratory any time soon; the mushroom season is winding down for this year.

“Right now I’m kind of phasing out for winter,” she said. “It all starts up again in April.”