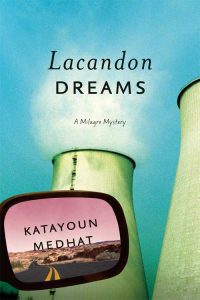 Franz Kafka—the cop—is the “patron saint of lost causes.” He doesn’t have a good memory for faces (not handy when you’re an officer of the law). He was born in the month of “dreamers and idealists.” He can quote William Blake with ease. He grew up “semi-feral” in Wales with an overbearing twin sister. He has a thing for The Doors. Given his inclination to say or do the wrong thing, he’s often considering alternative careers, such as working as a budtender in a marijuana shop.

But now he investigates murders and other problems in the town of Milagro (a.k.a. Cortez) in the southwest corner of Colorado.

The fictional cop Franz Kafka did not choose his name. He goes by the initial K. “In K’s opinion, people who enthused about Franz Kafka’s work led lives that weren’t sufficiently Kafkaesque. His own reality emulated Kafka’s imaginings to an uncomfortable degree. K tended to regard Kafka as a realistic writer.”

K is the creation of writer Katayoun Medhat and he is back (after the debut, The Quality of Mercy) in Lacandon Dreams with a story that weaves in fracking, Big Energy, online bullying, school safety, environmental activism, and the power of understanding your dreams.

It’s K’s jaundiced, jaded worldview that makes the stories so page-by-page entertaining, once you dial in K’s particular point of view and realize you’re here for the witty insights, not nail-biting tension (though there are certainly moments).

K is a chilled-out cop. He’s an outsider’s outsider. K and Jeff Lebowski would get along great knocking back a couple of White Russians. (Though K might opt for a beer.) K is often bemused and interested in cultures and race and frequently probes these topics with Navajo cop Robbie Begay.

Medhat’s dialogue is excellent. In contrast with some crime fiction dialogue that is overly terse and unrealistically clipped, Medhat lets her characters converse. Full conversations bloom. Begay and K can go on like an old-fashioned buddy movie— but it’s never boring (and often involves food choices). The story moves, from the executive offices of a major energy company to a high school classroom, from a double-wide trailer to peculiar tree in the Goosewash Wilderness. Medhat’s descriptions take a warts-and-all approach. She sanitizes nothing. But she’s clearly in love with the town and high desert.

Readers familiar with Cortez and surroundings won’t have any trouble identifying the sights (and smells and sounds) of Cortez—from the used bookstore to Needle Rock. Some real spots are fictionalized— but obvious. Whenever K encounters a large institution and needs to get past a stodgy receptionist, it’s game on. Interplay with various palace guards (receptionists and secretaries) are a recurring motif played to hilarious effect (and riff off writer Franz Kafka’s ongoing theme about how bureaucracies deaden the human spirit).

Lacandon Dreams (the title references the Mayan jungle and its people) takes K on a journey that prompts him to frequently consider the nature of reality— and to pay more attention to the imagery from his dreams. K knows dreams are “backdoors to our conscious or something.” K learns from an old Lacandon woman that “dreams weave together stuff that we know, but that we don’t know we know.”

To figure out the case of the missing teenager—and the near-suicide—K learns to trust his own instincts—as much as he’s worried by what he might find.

K is a memorable character. How many cops do you know who might imagine waking up after a 500-year nap and immediately request “fifteen bottles of Bitter & Twisted IPA, a bong and The Door’s ‘Celebration of the Lizard’ on full blast? Or a sleeping pill.”

While it’s light on its feet and feels like a breezy read (though not at all a cozy) Lacandon Dreams is rich with ideas. Read Lacandon Dreams and you will soon want to follow K anywhere he goes.