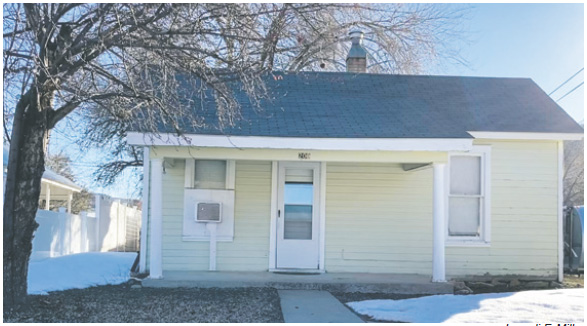 This one-bedroom, one-bath (550 square feet) home in Dolores sold in the spring of 2020 after being listed for only a few hours on the Cortez Swap & Sale Facebook page. Real estate in the local area seems to be selling with increased ease and for higher prices. Photo by Janneli F. Miller

Sam Jones, a long-time Durango resident, lost his job as a sound engineer due to the COVID-19 pandemic. He used to travel regularly to the Bay area in California to work concerts and other events, but he hasn’t been able to do so in a year.

The shutdown of live performances meant that Jones had no work, so he began looking for other options to make a living. He and his wife own a home in Durango and had operated their residence as a short-term rental so they could go back and forth between San Francisco and Durango, renting it out when they were absent as per his work schedule.

This gave him the idea of purchasing another property for rental purposes. He bought a home in Dolores in November 2020, and began remodeling it in January 2021, “because I think Dolores is going somewhere,” he told the Four Corners Free Press.

He had looked at properties in Bayfield, Durango and Dolores, but thought Dolores had the best investment potential. He found a 950-square-foot, two-bedroom home in Dolores that needed remodeling, as many do. The house, offered by Regents, was on the market for five days, and in that time the sellers received five full-price offers. Jones made an offer above the asking price, thus becoming the successful new owner of the downtown property.

“This gives me something to do,” he said. “I bought this home because I think the rental market is good here, and the resale market is only going to go up.” He is now doing the remodel himself with the help of a friend, explaining that – compared to the other places he searched – “this property was in my price range.” He decided to turn it into a long-term rental, specifically because of his short-term rental experience in Durango. Jones said both options would give him an income, but he thought this would be more practical.

“The short-term rental market in Dolores would be tricky,” he said. “I’m sure in the summer it would be gangbusters, but then in winter it would probably be empty. And then with short-term rentals you need to have someone available locally to clean and manage the property, and we couldn’t do that living in Durango.”

Jones was also aware of the town of Dolores’ recent discussion about regulating shortterm rentals, and said it would be easier to turn the property, which was owner-occupied for 66 years, into a long-term rental.

He is hoping to have the residence ready to rent by April, turning yet another owner-occupied home into a rental property. According to Rachel Vass, who operates short-term rentals in both Dolores and Cortez, “Dolores does not have a long-term rental shortage. Only 49.7 percent of Dolores houses are owner-occupied. That means around 250 in-town residences are either rentals or vacant.”

Vass got her numbers from the 2018 census. The American Community Survey (ACS), done in 2019 by the U.S. Census Bureau, reported a renter-occupied rate of 53.8 percent for Dolores, up almost 4 percent in one year. The Colorado renteroccupied rate for 2019 was 35.6 percent, which is similar to the national rate of 36.4 percent.

Clearly Vass is correct in her assessment that Dolores does not have a long-rental shortage. Indeed, according to the most recent data available, there are more rentals in Dolores than owner-occupied households, yet it’s common to hear people complain that there are not enough rentals available.

Vass said this is because once someone gets into a long-term rental, they are likely to stay, making it appear that there’s a shortage of rentals even though there are plenty. But is Dolores typical of Montezuma County? What is going on with the real estate market? Has the pandemic influenced property sales?

Paul Beckler of Regents told the Free Press that he thinks the pandemic has influenced the local market.

“My personal impression with the COVID thing is that a lot of people who were maybe on the fence about leaving metro areas are now committing to that course of action and are looking for places that are more rural with a quieter pace of life.” He said that the inventory is down.

“There is not a whole lot out there for sale – less than this same time last year.”

Katherine Dobson, an independent broker operating out of Mancos, agrees.

She told the Free Press, “I have had a number of prospective buyers who are now able to work from home and foresee that continuing, so it has expanded their options on where they can live. They are drawn to a rural area and it is possible for that dream to come true now rather than waiting until retirement.”

A Jan. 21 Durango Herald article by Patrick Armijo reports that the increase in telecommuting for work has resulted in increased sales in the high-end Durango market, corroborating the trend noticed by local Realtors.

Property prices are rising and inventory is limited in both La Plata and Montezuma counties, but the circumstances are quite different.

When the Free Press queried Dobson as to what was selling – in-town residences, vacant land, farm and ranch properties, or high end homes – she replied, “All of it!”

Jones mentioned that he couldn’t afford anything in Durango, where he resides, so he ended up buying in Dolores.

“There was nothing available in my price range in Durango,” he told the Free Press.

Real-estate markets typically fluctuate due to market pressures, and when there is limited availability combined with increased demand, prices rise. Beckler notes that “what we’re seeing is overall listings are down – because fewer people are selling. There is less inventory out there. In the last 12 months we’ve seen prices come up.” Dobson said, “Median sale prices in Montezuma County are up over 50 percent in the last year!”

The ACS, which aggregates national statistics and provides comparisons, shows the 2019 median price of a home in Cortez at $149,600, which is 43 percent lower than the Colorado average.

The Colorado Real Estate Network (CREN) established in 2005, is a regional multiple listing service (MLS) service providing member Realtors with communication tools for buying, selling, leasing or auctioning properties within the region. A part of their service is to put out monthly market updates. The January 2021 update for Montezuma County shows that the median sales price in January 2021 was $275,472, an increase of 54.1 percent from 2020.

Dobson thinks that the price increase is “likely more due to low interest rates and an increasing interest in the area which was happening prior to COVID-19.” She told the Free Press that “there certainly seem to be a lot more buyers looking for properties.”

Beckler concurred, telling the Free Press that there are more people looking to buy and submit offers. He said this is “even different than three months ago – in the middle of winter, from Thanksgiving to New Year’s, things were a little bit slower, which is typical since nobody likes to move in the winter time.”

This won’t be surprising to residents of the Four Corners, who know that it’s a lot more affordable to buy and live in Cortez or Dove Creek than it is in Durango and Telluride. Yet the lifestyle in Montezuma County provides similar outdoor recreational opportunities and amenities, and lately people are choosing the small towns over busier places.

Beckler said “I think this has been a trend for a while, not only due to COVID. People are wanting a quieter pace of life. They are seeking to leave congested areas busy with traffic and noisy. They want a quiet pastoral kind of life and that’s why they move here.” Dobson explained, “Most of my buyers last year were from Colorado, many from the Front Range. Also, locals are looking to expand into a larger property or invest in a rental property.”

Jones ended up in this category due to COVID-19 and a lost job, but as noted earlier, telecommuting has had an impact, as has the recent increase in visitors to the area due to the pandemic (See articles in the July 2020 and October 2020 Free Press).

Moving to the valley

The reporter spoke to two couples who had visited the area in the summer and then returned to purchase property. One, from Minnesota, stayed in a short-term rental in Dolores over the summer, and the other visited friends and returned to rent in town while looking for a place to buy. While anecdotal, these people’s experience and decisions are reflected in the local real estate and rental markets.

Beckler told the Free Press that the Dolores River Valley has been a particularly hot area for property sales. “Not a lot of people are wanting to buy a vacation home in downtown Cortez, but those who have driven through the area on the scenic skyway are finding that it is actually attainable to buy property south of Rico, and that has driven up the prices.” Listings are down, there are fewer properties available, and so now when something comes up, it usually sells quickly these days.

“Properties are going under contract very quickly when they are listed,” Dobson agreed.

Beckler continued, “People are getting focused in this environment of competition, and they’re more willing to make a move than to sit back and wait. We now have multiple offer scenarios, where several buyers are all submitting an offer to the seller.” Dobson said everyone in the real estate industry – lenders, appraisers, home inspectors and so on – is super busy, so it is now taking longer to close on a home. Jones bought his property before Thanksgiving, but it didn’t close until January.

Is there anything that isn’t selling? Becker said land prices are not increasing at the same rate as residential homes, and there are more opportunities to purchase vacant land. However, there is not as much demand, because “most people who buy vacant land do so to build, but the cost of building supplies has increased so much it has made it prohibitive.”

The pandemic has definitely had an impact on local real estate sales, as well as the rental market. Whether or not it is the main driver in the recent uptick in real estate prices locally, the word has definitely gotten out that Montezuma County, with its “pastoral” lifestyle including scenic vistas, varied outdoor recreational opportunities, and friendly small towns, is an affordable option for those looking to relocate, own their own home, or invest in property to supplement their incomes.