Montezuma County may put teeth in its dog law

A dog ordinance will have its day in November, when the Montezuma County commissioners will hold a public hearing on a proposal to amend and tighten the county’s existing law.

On Sept. 28, commissioners Gerald Koppenhafer and Steve Chappell (Larrie Rule was absent) agreed to set a hearing to discuss possible provisions in a stricter dog-control ordinance. They tentatively set the hearing for Monday, Nov. 23, at 9 a.m. in the county annex. Public notices with the time and date, as well as the complete draft ordinance, will be published in local papers. 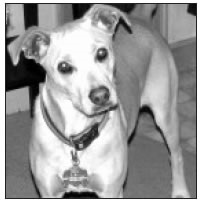 Montezuma County is considering amending its laws to give officers more options for dealing with problem canines. Photo by Wendy Mimiaga

Sheriff Gerald Wallace and Undersheriff Dave Hart told the commissioners they would like to move toward a “care-and-control ordinance” rather than a simple vicious-dog ordinance, which is what the county now has.

Hart said he worked for a county in Missouri that had such an ordinance. The “care” portion addressed dogs that were malnourished or ill-treated or that barked constantly, while the “control” portion delineated when a dog that was off its own property was considered out of control.

The rough draft of the county’s proposed resolution, which would amend an existing resolution, addresses only control, however, not care.

A half-dozen people showed up for the discussion, and all seemed to be in favor of more regulation of roaming and barking dogs. But the commissioners and sheriff’s officers noted that regulating dog behavior can be a difficult and complex task.

“You don’t want to make the pendulum swing too far the other way,” Wallace said.

The draft ordinance is much narrower in scope than those in the audience would have liked; it does not regulate barking and does not require licensing.

Wallace said he envisions a complaint- driven ordinance that would cover situations such as dogs that repeatedly menace cyclists or joggers on county roads. “Right now there is nothing until the dog becomes vicious and bites someone,” he said, likening the system to “putting up a stop light after you have a lot of accidents.”

Montezuma County has one of the highest incidences of reported dog bites in Colorado, and there are also numerous complaints about dogs chasing and killing livestock. Nationwide, dogs kill more livestock than any other animal except coyotes, according to U.S. Department of Agriculture statistics.

Dogs also cause traffic problems, Wallace said. “We have a number of accidents where dogs are out walking on the highway and people swerve to miss them,” he said.

Wallace said under current county law, there is little officers can do about a problem dog until it bites a person. “A vicious-dog ordinance works after the fact,” he said. “If there’s a way to deal with the problem so people don’t get bitten just walking down the road or riding their bike, you need to look at it.”

Owners of offending dogs would be contacted and asked to keep their dog from chasing people or causing other problems. If they didn’t comply, then they could be cited, and dogs not under control could be impounded. “This puts some teeth in the law,” Wallace said. “Now there’s no teeth. You say, ‘Please take care of your dog’ and they say, ‘Whatever’.”

The resolution as drafted provides for penalties of up to $1,000 in fines and/or up to 90 days of jail time for violations not involving bodily injury. Any offenses involving injury to a person by a dog are considered Class 2 misdemeanors and carry a separate set of penalties. The penalties are set by state law, not the county.

Hart said the county’s law would not be intended to crack down on dogs that are simply running loose. The city of Cortez has a dog-at-large ordinance and an animal-control officer that picks up roaming dogs, but the county would not do that. “I don’t think you want to become that stringent,” he said.

Wallace said the sheriff’s office has an agricultural officer who deals with complaints involving water disputes and livestock, and that individual could specialize in dog complaints as well. But any deputies would have the authority to respond to such complaints.

Hart said he knows the stricter law may not be entirely popular. “A lot of people in this community are used to having dogs running free, and they won’t want to see a change,” he said. “But we also get a lot of people asking us, ‘Why aren’t you doing something about this?’ ”

The officials generally agreed that regulating barking – something not called for in the draft resolution – would be difficult. “You cannot stop dogs from barking,” said Koppenhafer, who is a large-animal veterinarian. “What is the threshold for a complaint? Deer come into my yard and my dogs are going to bark.”

“If they’re barking during the day, that’s kind of life,” agreed Hart.

However, a woman in the audience disagreed, saying she had neighbors’ dogs barking around the clock. “The key words are ‘habitual’ and ‘persistent’,” she said, citing barking-dog ordinances from other places. “Why should we be penalized for living in the county?” She said she had called the county and was told her only option was to sue her neighbors.

“We’ve stayed awake many, many nights listening to dogs bark,” said another woman. “They never seem to bother the owners. When you have to get up at 5 a.m. to work, it’s hard.”

Hart said that, as current law is written, the problem of barking dogs in the county doesn’t even come under “disturbing the peace.”

A man in the audience said he and his wife can’t walk to their garage without a barrage of barking from the neighbors’ dogs. “It gets old,” he said. “What we’re finding here today is there’s no relief, and there’s really going to be no relief, for barking.”

Wallace said barking is a separate issue for another discussion.

The commissioners said they want to hear public input before deciding what the resolution will contain in the final version.

“We’re not going to reinvent the wheel, but we may add a few spokes,” Chappell quipped.