An independent audit of the oil and gas industry in Montezuma County has led to a significant property-tax windfall, and the trend is catching on in other Western Slope counties. 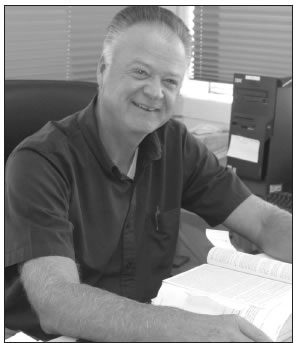 Montezuma County Assessor Mark Vanderpool pushed for an audit of oil and gas companies that resulted in a property-tax windfall for the county. Photo by Wendy Mimiaga.

“Close to 40 percent of our tax base is from oil and gas, and for the last 20 years, the industry has been selfreporting with no meaningful audit in existence, and I have real difficulty with that,” Vanderpool said. “Regular people are assessed for actual value, so should oil and gas.”

Field inspections of every company focused on re-appraising personal property, such as equipment and pipelines. The values found were 300 to 500 percent higher than the reported values, he said. No longer will the industry enjoy relative anonymity, Vanderpool added, vowing to continue the audits “as long as I’m assessor.”

Audits for such a complicated and vast industry are far too expensive and labor-intensive for small assessor offices to handle. So in 2006, Vanderpool went to the county commissioners for permission to hire an outside accounting firm to handle the bulk of the audit. They agreed, and the county hired Visual Lease Services out of Oklahoma for $150,000 to conduct new appraisals, research and inspections. An additional $35,000 is budgeted for an annual contract with the firm to continue the industry audits into the future.

The investment has paid dividends. Increased taxes as a result of the personal property audit were approximately $375,000 higher than what they would have been without the audit, Vanderpool said.

And, under Colorado law, when assessors conclude that a company has not reported the correct value of all of its personal property, the omitted amount can be added on to the tax returns for the previous six years. That total, called omitted years, was $191,000 in additional tax revenue for county taxing districts.

In addition, the companies audited paid a total of $215,000 in penalties for excluded property on tax returns. Penalties collected by the county go directly into their budget.

The companies’ actual value for personal property jumped from $24.6 million in 2006 to $56.8 million in 2007 after the audit, according to the assessor’s office.

For the most part, the companies agreed with the updated appraisals, Vanderpool said. The additional tax bills have been paid in full, the revenue was dispersed to the various taxing entities, such as schools and fire districts, and is being used.

But the 2007 audit by Montezuma County is being contested by one company. Questar Exploration and Production challenged the updated appraisals to the Colorado State Board of Assessment Appeals, questioning the methodology used in conducting the audit, Vanderpool said.

Vanderpool told the commissioners Oct. 27 that the methodology was not that recommended by the state Division of Property Taxation, but that their system does not allow for “a meaningful audit” of oil and gas.

The final BOAA hearing took place in Grand Junction in March, but no decision has been handed down yet on the case, despite laws that require a decision be made within 30 days.

Counties around the state are watching the case to see what happens.

“It has statewide ramification,” Vanderpool said. “Other county cases are pending. We’re the ice-breaker.”

The loser will likely appeal to a higher court, and eventually the Colorado Supreme Court, so the final decision could take years. If the county did ultimately lose, the extra tax dollars would have to be abated, or refunded, back to the companies.

A production audit analyzes fair market pricing of the carbon-dioxide product, which is extracted from the local McElmo Dome, the largest such reservoir in the country. The gas is then piped to west Texas and injected into spent oil wells to force residual oil deposits to the surface.

Kinder Morgan was singled out for several reasons, Vanderpool explained. Their 2008 production was less than it was for 2007; they use half of what they produce here to inject into oil wells they own in Texas; they are the county’s largest producer; and the royalty amounts they reported to the Montezuma County assessor did not correspond with what they reported to the state.

The audit, which cost $5,000, is expected to be completed in the next two months. Kinder Morgan has been very cooperative, Vanderpool said, considering a surprise visit by the tax man.

“I sent the accountant and two of my employees to Houston, and we audited their offices down there,” he said. “I don’t believe they ever expected us to knock on their door in Houston.”

“When my people were in Houston they were able to see hundreds of third-party contractors where Kinder Morgan is selling CO2 to other companies,” Vanderpool explained. “Weighted averages of those contracts were conducted to come up with typical pricing, and while it is not complete, it appears to be over 90 cents per mcf.”

Every 30 cents of production translates to $1 million to the county in tax revenues, he said.

Production audits of other companies are expected in the future, Vanderpool said.

Government audits of the oil and gas industry have been catching on, especially on Colorado’s Western Slope, where the resource is plentiful. Moffat, Rio Blanco and Garfield counties are also conducting personalproperty audits of oil and gas companies there. Once word gets out of the payoff for strapped county and state budgets, there will surely be more.

“Oil and gas has been self-reporting for years, and, quite frankly, assessor’s offices have not had the resources or expertise to know whether the reports they get from the companies are correct or not,” Vanderpool said. “Suffice it to say that any time [oil and gas] companies are audited, odds are that the increased assessment will more than pay for the cost of the audit. I’m not saying that they lie or cheat intentionally, I just think that it is important to make sure that the actual value is what’s being put on the tax roll.”