Wow! Why is the west arm of McPhee Reservoir all mud and weeds? Why is water still being released out of the dam but the much-needed irrigation water was shut off a month and a half early? Have you been reading about fears of Lake Mead “drying up,” and the need to dump extra water into it from Lake Powell? So what does that have to do with us? It is all connected, so let’s take a brief look at a little history. 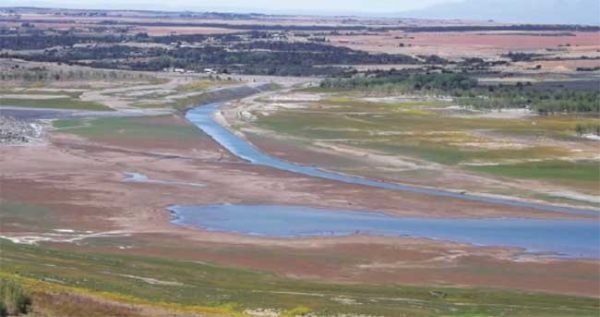 The west arm of McPhee Reservoir on Sept. 13 looking toward the Great Cut Dike. Photo by Dexter Gill.

Water is right up there with oxygen in the “must have for life” category but can also be a problem when there is too much, or it’s too dirty, or there is not enough, all of which can cause bitter fights and battles. As Montezuma and Dolores counties began to develop in the 1880s, it was pretty dry south of the Dolores River and west of Mancos Creek. By 1890, diversions had been constructed with private monies and workers, bringing water into the Montezuma Valley and Cortez from the Dolores River. The dusty, dry sagebrush valley was converted into the verdant green valley you see today without the hindrance of the EPA and environmental laws of today. Thank God they didn’t exist then or this would still be a dusty dry valley.

In the early days, there weren’t many people and the water seemed endless to them, but soon as the states began to grow in the Southwest, everybody was using the Colorado River as a main source of water. Everything has a limit, even the Colorado River. To prevent Western water war shoot-outs between states, seven states in the Colorado River Basin formed an agreement on who could use how much and what controls would be used. This agreement was drafted in 1922 and was/ is known as the Colorado River Compact.

The river basin was divided into the upper basin, where most of the water originates, and the lower basin, where the states have little water production but high use of the river water.

The upper basin states are Colorado, Utah, and Wyoming. The lower-basin states are Arizona, New Mexico, California and Nevada. The water gurus at the time determined that the upper and lower basins would divide the water by about 50 percent, with each basin having exclusive beneficial use of 7.5 million acre-feet; however, the lower basin could have an extra million if needed for beneficial use. Surely there would always be plenty for everyone.

That was all fine and good as long as there was over 15 million acre-feet of water being produced from the upper basin watersheds. It is important to note that it was explicit that the water was “to secure the expeditious agricultural and industrial development of the Colorado River Basin.” Further definition included use for “household, stock, municipal, mining, milling, industrial.”

Under the misconception that there would always be plenty of water, some thought the Western Slope of Colorado surely did not need all the water produced there, so along came the water thieves. The Front Range of Colorado, which is not in the Colorado River Basin, began buying up water rights on the West Slope and diverting the water over to the Front Range to supply the growing population there, part of what they call “buy and dry,” where the agriculture water is purchased for municipal use and the farm is dried up. Then along came the Endangered Species Act, which allowed activists to demand water rights for fish. That affected McPhee Dam construction and management. Then came the state’s “Instream flow” program under which activists decided the river flows must not drop below a level they determined that should be minimum to maintain their perception of natural conditions. Then recreation was included in the need to designate water-use priority. Things are getting pretty muddy by now in figuring out who has how much water to use for what. Then throw in the Indian Treaties on water rights and international agreement with Mexico for their share of leftover water. There doesn’t seem to be any leftover water these days. The consumptive use of water in the Basin has gone up and up, while the production of water has gone down and down, creating a supply and demand problem.

Now do you see the connection between Lake Mead and our waters? All of the above changes to the original compact for use of the water have created a very convoluted and confusing water/ river management nightmare involving state water laws, multi-state compacts and international treaties.

Why has water production gone down? Why do you weed your garden? Because weeds suck up the water and starve the crop you are growing. The overcrowding of too many trees and brush has sucked up water and increased the transpiration and evaporation of water while reducing snowpack accumulation and runoff. The cessation of forest watershed management on most forests in addition to wilderness and roadless areas has resulted in the unhealthy overstocked forest watershed. You throw in the recent drought periods on top of a deteriorated and unmanaged watershed and you suddenly have a water crisis. Food production, economic development and environmental health for all life, including man, is being threatened.

What to do? In the short term, develop a balanced conservation plan for all users, while fully protecting water rights of all water on the West Slope and Southwest Colorado; ensure no new claims can divert or restrict/limit the stream flows. In the big picture, recognize that clean water production is the highest and best use of all the watersheds; take action to reinstate forest and range management actions for a resilient forest to withstand future times of drought that occur; to improve and protect all the watersheds to restore the historic clean water flow production of the Colorado River Basin. Our future depends upon it!