In the sometimes insular world of crime fiction, James Lee Burke’s is a name spoken with reverence thanks to his 36 novels, his two Edgar Awards, and his status as a Grand Master Award recipient (in 2009) from the Mystery Writers of America.

Once hailed as “America’s best novelist” by the Denver Post, Burke has the rugged good looks and vagabond past that invite comparisons to Jack London or Louis L’Amour. His books have been widely translated and adapted for both film and television, his protagonists portrayed by the likes of Alec Baldwin (Heaven’s Prisoners) and Tommy Lee Jones (In the Electric Mist). A Texas native turned Montana rancher, Burke’s series characters include Louisiana sheriff Dave Robicheaux (21 novels), Texas Ranger Hackberry Holland (three novels) and Texas attorney Billy Bob Holland (four novels). 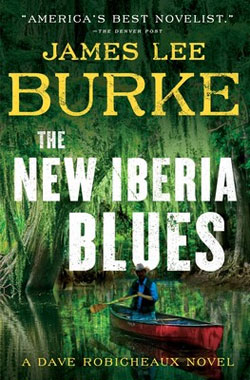 Having never read Burke, who is now 82 years old, I jumped at the chance upon learning that his 37th novel, The New Iberia Blues, would revisit the aging but still formidable Dave Robicheaux and his private investigator sidekick Clete Purcell as they pursue a serial killer through the pinewood honky-tonks and backwater bayous of southern Louisiana. With a celebrated author at the helm, a high-stakes game afoot, and a richly atmospheric backdrop against which to operate, I figured what could possibly go wrong?

The answer, alas, is just about everything. Burke’s latest novel is a steaming mess from start to finish – a rambling, bloated yarn that leaves no sense unscathed and no cliché untapped.

Desmond Cormier is a local-boy-made- good; a New Orleans street urchin who, we’re asked to believe, rose from poverty and obscurity to become a wunderkind Hollywood film director. The New Iberia Blues opens with a scene of grotesquely ritualized violence, the first of many to come, in which the crucified body of Lucinda Arceneaux, a local preacher’s daughter, is discovered (by Robicheaux himself – what are the odds?) floating off the shore of a seaside mansion owned by Cormier and occupied by his visiting L.A. entourage, a sketchy assortment that includes a foppish sadist named Antione Butterworth and a former mercenary soldier named Lou Wexler.

Coincident with these peregrinations, Clete Purcell’s nearby fishing idyll is interrupted when he witnesses a uniformed man leap from a passing train into the Mermentau River. The jumper proves to be Hugo Tillinger, an escaped Texas inmate with ties to a white supremacist prison gang and a direct connection to the crucified woman thanks to the Innocence Project with which she formerly (when not catering movie sets) volunteered.

Stay with me now. Soon more bodies are turning up, each suggesting some connection to the cards of the Tarot (the Suit of Wands, the Suit of Pentacles, etc.), or at least according to Bailey Ribbons, a comely young police officer who’s to be Robicheaux’s new partner (and who herself might have a murderous past) but whom Cormier wants to cast in his current movie. Next thing we know, Wexler is dating Robicheaux’s daughter Alafair, a lawyer-novelist-screenwriter who’s also somehow working on the film. Enter Chester “Smiley” Wimple, a freakish killer-for-hire with ties to the New Jersey mob which may or may not be secretly financing Cormier’s film project. Or is it Saudi oil money? And what does any of this have to do with the Aryan Brotherhood? Or with a crooked cop who’s running prostitutes? Or with the Maltese crosses popping up everywhere? Or with Cormier’s inexplicable obsession with the John Ford film My Darling Clementine?

Who knows? And at this point in the novel, who really cares?

Beyond its exhaustively complex and improbable plot, The New Iberia Blues employs just about every trope in the detective novel canon. Robicheaux’s a recovering alcoholic? Check. He and Clete are Vietnam buddies with dark battlefield secrets? Check. Despite their forty-year age difference, the beautiful Bailey can’t resist Robicheaux’s steely implacability? Check. All the snitches to whom Robicheaux looks for help seem to turn up dead? Check, check, check.

You get the point. For devout fans of Burke and Robicheaux, The New Iberia Blues ($27.99, from Simon & Schuster) might prove a thrilling stroll down memory lane. For the rest of us, allow me to suggest something by John Grisham or Elmore Leonard instead.