We live in troubling times; nowhere more so than in the arena of women’s reproductive health. On his first day in office, President Trump signed a ban on federal money going to international aid groups that provide information on abortions – the so-called “global gag law.” Two months later, the House Freedom Caucus met with Vice President Pence to explore proposals for reforming our nation’s health care system that included eliminating contraception and maternity care from the Affordable Care Act’s suite of minimum benefits. Photographs from both events depict our smiling chief executives surrounded entirely by men, with nary a woman in sight.

If these images weren’t enough to give pause, then consider the men at the center of each. Candidate Trump had publicly stated his belief that “some form of punishment” must be in place for women who make the wrenching decision to terminate a pregnancy. As governor of Indiana, Pence had signed legislation outlawing abortion in the event of fetal abnormality and mandating that all unborn fetuses, including those resulting from miscarriage, either be interred or cremated. Both men, of course, have repeatedly supported the defunding of Planned Parenthood. 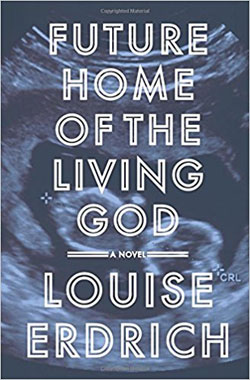 Against such a backdrop, it’s perhaps not surprising that the breakout bestseller of the Trump/Pence era – Amazon’s most-read novel of the past summer, in fact – was a book first published in 1985. Margaret Atwood’s The Handmaid’s Tale is a dystopian saga of Christian theocracy and misogyny in which environmental toxicity has rendered mankind increasingly infertile, leaving fertile women subjugated and enslaved to powerful men for the sole purpose of procreation.

It’s impossible to ignore the many parallels between Atwood’s chilling work of speculative fiction and Louise Erdich’s latest novel, Future Home of the Living God. Both feature environmental crisis, religious fundamentalism, and governmental intrusion into the reproductive process. But while Atwood’s book seems to have anticipated current events, Erdrich’s, in a sense, reflects them. As its forward explains, Living God was actually begun, and then shelved, in 2002, only to be exhumed and completed in January of 2017. As such, it functions both as crystal ball and looking glass.

Cedar Hawk Songmaker is a young Native woman of Ojibwe parentage adopted and raised in suburban Minneapolis by earnest Anglo liberals. As the novel opens, Cedar is unmarried and pregnant and like the rest of the country, coming to grips with an uncertain future. For reasons somehow relating to the earth’s changing climate, evolution appears to have reversed itself, altering the human genome and causing wild mutations. America, in the ensuing panic, has devolved into a theocratic state – the Church of the New Constitution – in which civil rights are suspended and all pregnant women are consigned to birthing centers from which few ever seem to return. On the run from government forces and bounty hunters, endangered both from without and (literally) from within, Cedar seeks out her birth parents, enters what amounts to an underground railroad, and fights not just for her own independence, but for that of her unborn child.

While it might be tempting to dismiss Future Home of the Living God ($28.99, from Harper) as a cynical attempt to capitalize on The Handmaid’s Tale’s resurgent success, that would do both the novel and its author a gross disservice. Erdrich, who has won the National Book Award (for The Round House) and the National Book Critics Circle Award for Fiction (for LaRose), is a writer of extraordinary depth and talent who has crafted a novel both urgent and thought-provoking in its own right. With its engaging protagonist, its occasionally heart-pounding plot, and its thoughtful ruminations on subjects as diverse as Christianity, evolution, procreation, motherhood, government, freedom, family, Native identity, and female agency, Living God may just be the perfect novel for these decidedly imperfect times.