The crisp odor of oil paint and solvent greets anybody visiting the studio of Farmington, N.M., artist Gerald Farm, just next to the home he and his wife, Shari, built in 1973.

They separated the buildings because, Farm says with a grin, “Shari told me to get out and go to work.” 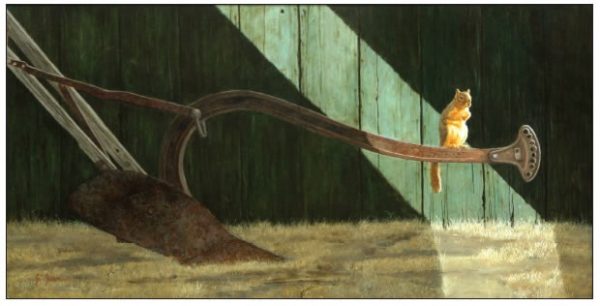 “Warming the Bones,” an oil painting by Gerald Farm of Farmington, N.M., is one of his many works focused on rural life.

As if he hasn’t been working. His 40 years’ experience in the art business includes a listing in “Who’s Who in American Art.” His paintings have appeared on Leanin’ Tree greeting cards, and in Southwest Art Magazine.

In his studio basement he photographs the models who will fill his canvases. He finds then almost anywhere. His first one, a rancher named Leroy McDaniel, glanced into a hardware store where Farm was buying supplies.

Although the artist had never requested anyone to pose for him, he bolted to the street and asked McDaniel if he would. The cowboy agreed and Farm took him home for the first of many sittings.

Since then, Farm has constantly searched for interesting faces. “I’m looking for the character in a person,” he says.

Once he has photographed his model dressed in one of the many costumes he has collected over the years, Farm develops his composition, beginning with sketches and color studies. Finally he enlarges the images and transfers them to canvas or wood panels.

His life experience gives him much to use in creating an oil painting. A native of Grand Island, Neb., Farm began drawing as a child, copying the comics. As a high school student, he thought he would become an illustrator, and began the Famous Artists Course.

He finished it after graduation while serving in the Navy. His tour of duty took him to the Mediterranean and Washington, D.C., where he worked in the Navy’s art and animation department.

After discharge, he returned to Kearney, Neb., where his parents now lived, and attended the University of Nebraska.

He taught school in Loveland, Colo., and along the way, married Shari, a fellow teacher who to this day proclaims herself “his greatest fan.”

After a year as an art instructor, Farm joined Hewlett-Packard as a commercial artist, churning out publicity materials for “stuff their engineers devised.” Shari stopped teaching to raise the couple’s two children.

By 1969, Gerald Farm had become Hewlett-Packard’s art director, but the long hours of work disenchanted him. He began to feel ready for a change.

“There was always another fire to put out,” he recalls.

Shari wanted a change, too. “He came home one day and I said, ‘Ger, I want to go back to teaching. Why don’t you paint?’ ”

Farm realized that if they wanted to make a switch, they should do it. He quit Hewlett- Packard “almost the next day.’ Sherry found a job teaching in Bloomfield, N.M., and they moved to the Four Corners sight unseen.

“Talk about stupid, dumb and ignorant,” Farm chuckles. “But we had to give it a try.”

When Shari saw the New Mexico desert after living in green Loveland, she admits she felt sick to her stomach.

Farm laughs, “We thought, ‘Oh, my goodness, what have we done?’”

He and Shari began to like friendly little Farmington, despite its few paved streets and fewer fellow artists.

“We just lucked out,” Farm muses. “Western art was big, which is what I painted.”

The Farms also traveled to Europe so Gerald could study the old masters’ rules of composition, and their use of light, shadow, and color values. How they solved technical problems especially interested him.

Later he traveled to Mexico and France, where he found many subjects. His compositions and use of light bring to mind the likes of Vermeer and Sargent.

Farm’s “Warming the Bones,” an oil of a squirrel sitting on a plow illuminated by a single shaft of light, resembles Rembrandt with an American twist.

Farm strolls to an oil leaning against the studio wall and lifts it. A doctor sits with a small boy who wears the doctor’s hat and coat. Both examine a puppy wrapped in a blanket. From the expressions on their faces, they seem to be agreeing on some secret, perhaps that a treatment of dog biscuits three times a day will cure Pooch’s ills.

“Well, that’s kind of the fun, because you can make it as exciting as you want to tell that story,” Farm says of the black-and white feel-good image.

Farm changes his style to reflect the mood he is trying to portray in a painting. “Old Bud,” an oil of a grizzled cattle raiser lost in thought by a barn, has the sharpness of a photograph. The shape of the plow sitting in the shadows becomes abstract. Other works have crisply focused subjects and soft backgrounds, reminiscent of the Impressionists.

Farm no longer shows in galleries. He only occasionally mounts an exhibit. When he turned 65, he decided to slow his pace and devote himself to selling on the Internet.

He gets together with the Lunch Bunch, a group of artists that collected in Farmington over the years that he and Shari have lived there.

From Arts & Entertainment, May 2011. Read similar stories about gerald farm, warming the bones.