One of the most dangerous women in America 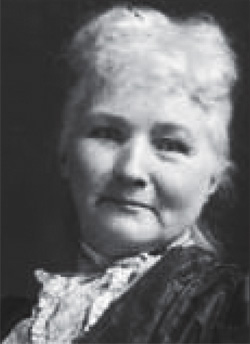 Mary Harris Jones was born on May 1, 1830, in Cork, Ireland. She was the daughter of Roman Catholic tenant farmers, Richard and Ellen Harris. During her early years, she and her family fled the Irish Potato Famine, which ravaged more than a million families. The Harrises immigrated when she was around 10 years old, to Toronto, Canada, Michigan and Chicago, Illinois.

She attended Normal School in Toronto but the Harrises were victims of discrimination because of their immigrant status and their Catholic faith. These were difficult years for the family. While Mary did not graduate from the school, she absorbed enough information and training to secure a teaching position at a convent school in Monroe, Mich., when she was 23. She was paid $8 a month and she described the school as a very depressing place. She soon tired of this position and moved to Chicago.

Mary experienced many personal tragedies during the first part of her life. She lived in Memphis for a time, marrying George Jones, an ironworker and strong union supporter, in 1861. George was a member and organizer of the National Union of Iron Moulders, which later became the International Molders and Foundry Workers Union of North America. This union represented ironworkers who specialized in building and repairing steam engines, mills, and other manufactured goods. They had four children, three girls and one boy, together, but an outbreak of yellow fever killed her husband and all her children in 1867.

After this loss, which was a real turning point in her life, she returned to Chicago and established a dressmaking business. Her shop was flourishing but after four years she lost her home, shop and all of her possessions to the Great Chicago Fire of 1871. This huge fire destroyed many homes and shops. Jones, like many people there, helped to rebuild the city.

She wrote in her autobiography that this was the beginning of her work as a labor activist.

She worked with the Knights of Labor, often giving speeches to inspire the workers during strikes. She began organizing strikes and protests, which occasionally ended with the police shooting and killing protestors. The Knights mainly attracted men and by the middle of the decade membership numbers were over a million, making them the largest labor organization in the country.

The Knights ceased to exist after the Haymarket Riot of 1886 when fear of anarchy and upheaval incited by unions led to a bomb being thrown into an altercation between the Chicago police and workers who were striking. With the dissolution of the Knights, Mary became involved with the United Mine Workers, frequently leading strikers in picketing. She believed that workers deserved better pay and working conditions. Her activities and deep caring for the workers she supported earned her the nickname of “Mother Jones.”

In 1901, workers in Pennsylvania’s silk mills went on strike. Many of them were young women demanding to be paid adult wages. The 1900 census had revealed that one-sixth of American children under the age of 16 were employed. Mary traveled to Pennsylvania, where she encouraged the wives of the workers to organize into a group that would wield brooms, beat on tin pans, and shout “join the union!” She felt that wives had an important role to play as nurturers and motivators of the striking men, but not as fellow workers. She claimed that the young girls working in the mills were being robbed and demoralized. The rich were denying these children the right to go to school in order to be able to pay for their own children’s college tuitions.

In 1903, Jones organized children who were working in mills and mines to participate in a “Children’s Crusade,” a march from Kensington, Pa., to Oyster Bay, N.Y., the hometown of President Teddy Roosevelt, with banners demanding, “We want to go to school and not the mines!”

As Mother Jones noted, many of the children at union headquarters were missing fingers and had other disabilities, and she attempted to get newspaper publicity for the bad conditions experienced by children working in Pennsylvania. However, the mill owners held stock in most newspapers. When the newspaper men informed her that they could not publish the facts about child labor because of this, she remarked: “Well, I’ve got stock in these little children and I’ll arrange a little publicity.”

Some called her a firebrand, others an activist, some called her one of the most dangerous women in America. Whatever you call her she was a formidable and tireless force. Known as the miners’ angel, Mother Jones became an active campaigner for the United Mine Workers Union. A political progressive, she was a founder of the Social Democratic Party in 1898. Jones also helped establish the Industrial Workers of the World in 1905.

Nothing could dissuade Mother Jones from her work. At the age of 82, she was arrested for her part in a West Virginia strike that turned violent, and was sentenced to 20 years. But her supporters convinced the governor to grant her a pardon. Jones, undeterred, returned to organizing workers.