Opening the medical profession to women

Elizabeth Blackwell was born on Feb. 3, 1821, in Bristol, England. Her father, Samuel Blackwell, was in the sugar refinery business, owning a large refinery. Her mother was Hanna Lane Blackwell. She had two older siblings, and eventually had six younger siblings. The family was also composed of four maiden aunts. When she was 11 her father’s sugar refinery was completely destroyed by fire and the entire family packed up and moved to America. 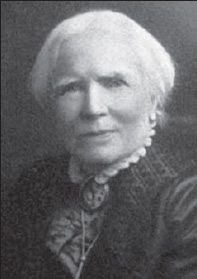 The children were educated at home by their parents, the four aunts, and private tutors. Samuel Blackwell was a Congregationalist and exerted a strong influence over his children’s religious and academic education. He believed each child, including his girls, should be given the opportunity for unlimited development of their talents and gifts. This perspective was rare during that time, as most people believed that the woman’s place was in the home or as a schoolteacher. Blackwell had not only a governess, but private tutors to supplement her intellectual development. As a result, she was rather socially isolated from all but her family as she grew up, but it was a very liberal and stimulating environment. They all grew to be independent thinkers and went on to be very successful. It is no wonder then that Elizabeth became the first female doctor of medicine in the United States and was joined soon after by her younger sister, Emily.

When in her twenties Elizabeth’s desire to earn a medical degree and become a doctor was her greatest challenge. It was considered inappropriate for a women to even consider this profession in those days. She was denied admission to every medical school in Philadelphia, New York, Harvard, Yale and Bowdoin. At last she was accepted at Geneva College in west central New York. It was only later that she discovered that she had accidentally been admitted by a panel who thought that her application was a joke being played by a rival school.

“My mind is fully made up. I have not the slightest hesitation on the subject; the thorough study of medicine, I am quite resolved to go through with. The horrors and disgusts I have no doubt of vanquishing. I have overcome stronger distastes than any that now remain, and feel fully equal to the contest. As to the opinion of people, I don’t care one straw personally; though I take so much pains, as a matter of policy, to propitiate it, and shall always strive to do so; for I see continually how the highest good is eclipsed by the violent or disagreeable forms which contain it.”

In the beginning she was met with extreme hostility by not only the angry male students, but by local townspeople. It must have been quite discouraging. However, her focus was clear and she kept her eye on the prize, so to speak, earning her medical degree, which was awarded in January 1849. Her thesis was written on the importance of sanitation and personal hygiene in fighting disease and focused also on typhoid fever. It was published in the Buffalo Medical Journal and Monthly Review a short while later. This theme became the core of her medical philosophy over the years.

After graduation Elizabeth studied abroad for two years. When in France she contracted purulent ophthalmia from an infant she was treating (also called neonatal conjunctivitis, an acute, mucopurulent infection occurring in the first 4 weeks of life, affecting 1.6 percent to 12 percent of all newborn). She lost the sight in one eye and it was surgically extracted. This was particularly devastating as she intended to continue her study and become a surgeon. Now, with only one eye, that was not a possibility.

When she returned to New York in 1851, she was barred from practice in city dispensaries and hospitals, jeered and ignored by her peers and suffered threats and attacks via a series of anonymous letters. Yet, once again, she persisted. Elizabeth purchased a house and opened a private practice. She gave lectures on hygiene and her lectures were eventually published in 1852. The practice was slow in building and it was a discouraging and lonely time for Elizabeth, who had been used to a large and free-thinking family. She adopted a 7-year-old orphan, Kitty Barry in 1854, who became daughter, companion, nurse and secretary to her for the rest of her life.

In 1853, she opened a dispensary consisting of one room, for women in the New York tenement district. She actively organized fundraising activities for the next four years and was able to open the New York Infirmary for Women and Children. She was now joined by her sister Emily. During the Civil War Elizabeth devoted much of her time to the Women’s Central Association of Relief, where both Blackwell sisters as a team selected and trained nurses.

In 1868 Elizabeth established the Woman’s Medical College of the New York Infirmary. It was here that woman could and did receive excellent education in addition to important clinical experience at an adjacent infirmary. Her lifelong dream was complete and the women’s medical college was firmly established. She left it all in Emily’s very capable hands. Elizabeth was a naturalized American citizen. She returned to England in 1869. In 1871 she created the National Health Society in London to further instruct and perpetuate her belief in the importance of good hygiene. The motto of the society was “Prevention is better than cure.”

In 1874, Blackwell worked together with Florence Nightingale, Sophia Jex-Blake, Elizabeth Garrett Anderson, Emily Blackwell and Thomas Henry Huxley to create the first medical school for women in England, London School of Medicine for Women, for which she acted as the Chair of Hygiene. In her later years, she was still relatively active. In 1895, she published her autobiography, Pioneer Work in Opening the Medical Profession to Women. It was not very successful, selling fewer than 500 copies. After this publication, Blackwell slowly relinquished her public reform presence, and spent more time traveling. She visited the United States in 1906 and took her first and last car ride. Blackwell’s old age was beginning to limit her activities.

This is just the briefest outline of a remarkable woman. If you want to know more there are a few books out there, including the newest one that just came out, The Sisters Blackwell: How Two Pioneering Sisters Brought Medicine to Women and Women to Medicine.