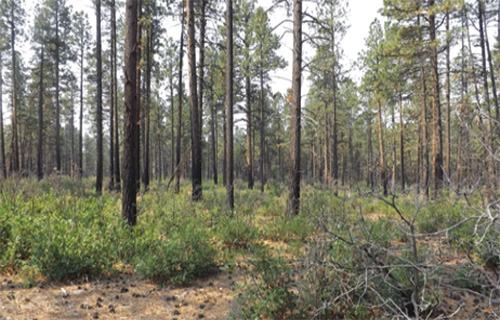 A stand of “blackjack” ponderosa pine under management on the west
end of the Glade, in the San Juan National Forest. Photo by Dexter Gill.

Come on, move it! All together now, ah one and ah two and ah LIFT! No, Lawrence Welk was not there. The ancient Chaco Pueblo culture in New Mexico preferred ponderosa pine trees for the beams in their construction. Have you been to Chaco and seen the size of beams in their construction? Where did they get the beams from? There are differing theories, however the most common one is that they were cut here in the southern San Juans and transported to Chaco. There you have it, the first logging operation supporting the building construction industry boom of 900-1150 A.D. Please note it was accomplished without an Environmental Assessment (EA) or a NEPA process, they knew their culture couldn’t last that long. Besides they were a part of the environment, just like we are today, and there are STILL ponderosa pines here.

So what is this tree that makes it so special? Well, actually all trees have their individual qualities and benefits that our Creator deigned in them for our benefit. The ponderosa pine is a “ponderous” stately long-needled pine that grows tall and straight with a large bole. It is most commonly found in the mid transitional zone of 7,000 to 8,500 elevation, depending upon soils, aspect and moisture. It is a fairly long-lived tree, reaching around 350 years average, with very occasional ones living to 500 years bearing infections of various diseases, insects, storms, droughts, fires, and the list goes on. The thick bark on the older ponderosa pines acts to insulate the bole from some fire damage if the fire is not too hot or intense. The young trees do not have that insulation.

The first white men known to have seen the ponderosa pine in Colorado was the Spanish explorers Escalante and Dominguez in 1776 when they camped on the Mancos River and then on to the Dolores. They noted the area around Dolores was “beautiful, with water, pasture, timber wood and firewood.” Did you notice the date? What was happening 1,800 miles east of here that same year? Also of note was the record where they crossed the Dolores River several times and camped along its banks northeast of the site of Cahone. “They met two Native American slaves, whom they called Genizaro and Coyote. The men had left their pueblo without notice to join the group.”

When Escalante was here, the ponderosa- pine forest would have been a mostly mature old-age forest, more open, allowing forage to grow, and water to flow. Here in the Southwest it is regarded as a “favorite” tree by many. All you mountain-bikers will recognize it as the common pine tree in the Boggy Draw and Chicken Creek trail areas. It is that tree that makes those trails so enjoyable to ride. The tree goes by several names in addition to ponderosa, such as “bull pine” and “blackjack,” which is the immature tree that is no longer a sapling. Then as it matures, it may be called “yellow belly” because as it matures into its “golden years” the bark turns a tan to golden color. Actually the bark is sluffing off and getting thinner, just like your hair and skin. It is now on its way down, to make room for the young “blackjacks” to show their stuff. An interesting side note is that the “yellow belly” ponderosa has an “old smell” (just like people), except the old ponderosa smells like nice vanilla. On a nice sunshiny warm day, be a tree hugger (you can’t social distance) and sniff a yellow belly and if truly mature, it will small like vanilla.

You have to remember the trees you see today are not the same ones that Dominguez saw! These are the next generation. The trees Dominguez saw likely are “living on” in some houses and buildings in Dolores, Cortez and Mancos. The old mill in the town of McPhee produced lots of lumber to build Montezuma County. My father built our house in Cahone out of ponderosa-pine railroad ties produced at the McPhee mill. In fact the first railroads built through Southwest Colorado and northern Arizona used mostly ponderosa pine for rail ties, as it was the best wood available in quantity and the federal government granted lands with the timber to the railroad for construction.

Ponderosa pine is a very versatile wood which has been used as dimensional lumber for construction, log homes, fine-grained millwork like interior molding, door jambs, furniture, cabinets, toys, paneling, paper, poles, posts, plywood, wood pellet fuel, carvings, bio-char, just to mention a few. The by-products of sawdust, slabs, edgings etc. can be further reprocessed into wood flour, making a wood “plastic.” The earlier telephones of the 1950s were a “plastic” made from “wood flour.” The pine resins are broken down further and used in rosin for violin bows, baseball pitchers. Distillation of the pine resins are used in chewing gum, soap, cleaning products, turpentine and many more. These are of course secondary manufacturing products.

If you love to recreate in the ponderosa forests, then support our local forest industries in their effort to restore and maintain a healthy growing forest . Without the industry to actively harvest and make use of the forest products, we will see the forest continue to deteriorate, producing only smoke and ash.