The Bureau of Land Management is looking for a few good plants. Fourteen plants, actually — mostly grasses that will be better suited for restoration projects than the ones they’ve used in the past.

The BLM and other agencies have been studying restoration efforts that haven’t gone as well as they’d like. In the worst cases, plantings don’t take and the agencies are left with barren, erosion-prone ground or land that’s primed for invasion by noxious weeds. Biologists have begun to suspect they have two areas for improvement: selecting their restoration plants from those that grow closer to the target rehabilitation area, and starting out with “pioneer species,” the plants that naturally make the best colonizers of disturbed soil. 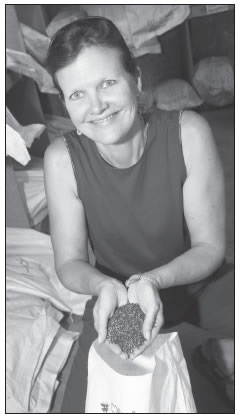 One of the best lessons has actually come from plants in their natural habitats. Forests don’t just begin with the trees. First, shallow-rooted, fast-growing grasses — the pioneer species — spring up in meadows. Grasses with deeper and thicker root systems eventually join them. Then come the shrubs.

Pine and/or deciduous trees may take decades to enter the scene.

Local ecologists with the BLM and the Forest Service think it would be better to begin their restoration projects with local species such as purple three-awn, yellow owl-clover, bulbous spring parsley, Louisiana sagewort, wild tobacco, and woolly plantain. They think these native plants would establish quickly, hold the soil better, and more effectively outcompete noxious weeds.

But there’s a problem: availability. The plants grow all around us, but there’s no reliable supply of seeds that land managers can use when it’s time to reseed a restoration project.

And that’s where the Native Seed Recovery Act Project comes in. Cara MacMillan, staff ecologist at the BLM’s Dolores Public Lands Office, is the lead researcher on a project to study the 14 target species in the wild, and evaluate their potential to be used in reclamation efforts. The project is named partly because it got its start with Recovery Act dollars.

Southwest Seed, Inc. of Dolores has conducted the first test plantings and will evaluate seed yields for the next three years. An economic analysis is also under way to find out whether the native pioneer seeds can be produced commercially, and then sold to both public and private land rehabilitators.

MacMillan said land managers got lucky after the 2007 Goodman Point Fire northwest of Cortez. They used seeds that were commercially available and appropriate for the site. As soon as they planted, big rain came.

“There was a perfect storm – the timing and the precipitation regime that came afterwards,” she said. “What I’m hoping is that we don’t need as much of a perfect storm to get things to work.” Choosing the best plants for the job will be key in guaranteeing success, she said.

Robby Henes, vice president of Southwest Seed, said there’s something “inherently smart” about using plants for restoration that grow somewhere nearby: “I’m not introducing something that shouldn’t have been here, from a wetter area or whatever.”

It gets even more complicated than that.

MacMillan said part of the challenge is using plants from similar-enough habitats and climate patterns, which may mean eventually maintaining seed stocks that are a bit more nuanced than a subset of the 14 species being tested now.

“I’m not trying to be a splitter to the nth degree,” MacMillan said. “I’m not limiting plants to a 10-mile radius to make them local. I’m in the business of trying to take a practical approach and say, ‘Which are our workhorse species?’ ”

She added that another goal is to “fill gaps where currently available species and varieties are unsuccessful or may be negatively affecting the ecology of an area” – by being unsuitable for the local pollinators, for example.

And she and her collaborators are trying to develop species that establish quickly in degraded areas. That trait is especially important when restoration should happen quickly, she said, especially for rehabilitating unauthorized travel routes, routes created from a permitted oil and gas activity but not open to the public, or burned areas where there is a threat of erosion.

MacMillan is working to establish a native-plant garden at the Dolores Public Lands Office to showcase the native plants under study. The garden will serve as a pilot project and learning tool for researchers, land managers and the community.

Meanwhile, she and her partners in the effort are hoping to put eligible grasses to work sooner, rather than later, at Canyons of the Ancients National Monument.

Heather Musclow is a BLM natural-resource specialist in Dolores. She says she’s eagerly awaiting the results of MacMillan’s research to use in weed control on some properties that were obtained by the monument within the past few years.

“They were fallow fields and devoid of native vegetation,” she said. “Therefore noxious weeds such as musk and Canada thistle have prevailed along with mustards, cheatgrass and other invasives. We’ve been treating the weeds for years. However, without establishing desirable plant species, the weeds just keep coming back.”

She’s also always in need of native seed for road closures; monument planning efforts have identified 41 miles of routes needing to be closed because they were duplicates, invited damage to cultural and natural resources, or caused soil erosion. Monument staffers have closed 15 miles of the roads so far, with 26 more to go.

“I wouldn’t say anything is currently missing from the seed mix, because we use seed that we already know about,” Musclow said. “What Cara’s project does is examine seed we don’t yet know about.

“The results from Cara’s work may benefit both Southwest Seed and the BLM on what seeds we propagate in the future, or incorporate into our seed mix to be used in specific soil types, reclamation situations or any number of possibilities.”