In northern San Juan County, Utah, President Obama is a man who can do nothing right – the worst President ever. So the day after he proclaimed a new national monument encompassing 1.35 million rugged acres in the county, residents gathered in Monticello to protest what they view as his latest outrage.

Conservation groups and Native American tribes have hailed the Dec. 28 announcement of the creation of Bears Ears National Monument, but critics view it as an over-reach of executive authority and an unmitigated disaster.

On Dec. 29, a crowd estimated at more than 300 shivered in the midmorning shade at the west entrance of the courthouse, bearing signs that said, “Trump this monument,” “Locals matter,” and “Obama sucks.” 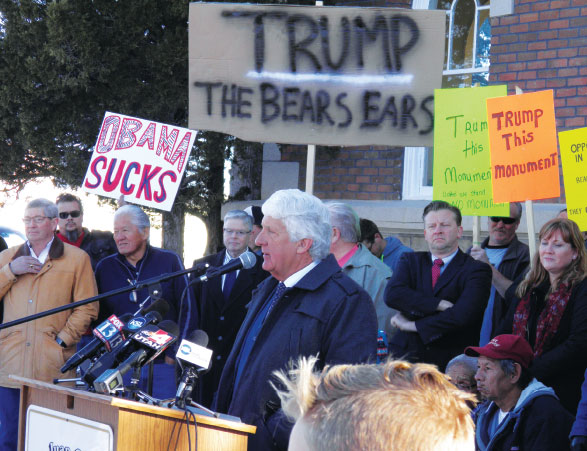 A plethora of elected officials spoke, including Utah Congressman Rob Bishop, Utah Lt. Gov. Spencer Cox, several members of the state legislature, and a number of San Juan County officials. All were unanimous in their anger over the designation.

“President Obama, you have offended every person in San Juan County,” thundered County Commissioner Bruce Adams, to wild cheers. He blamed “pressure from environmental groups and out-of-state tribal leaders” for the proclamation, which had long been anticipated or dreaded, depending on one’s point of view.

Bishop said the 1906 Antiquities Act, which gives presidents the authority to create national monuments, “is used in shadows and in secret” and has been abused by three leaders in particular – Jimmy Carter, Bill Clinton, and now Obama, who has employed it 29 times to either create or expand protected areas.

Bishop said Utah’s congressional delegation is “committed to working with you to change this. We will work to right this wrong.”

Bishop had launched a massive effort called the Public Lands Initiative to gather public input for a compromise bill that he hoped would provide an alternative to national-monument status. However, Native American tribes said their voices were not heeded during the process and pulled out of it, supporting the monument instead. His bill later died in Congress.

Donald Trump had a strained relationship, to say the least, with the state of Utah during the campaign and even after the election, but at the Monticello protest he had nothing but supporters, many of whom lofted signs calling on him to overturn the designation.

However, it is unclear whether he can do so unilterally. The Antiquities Act does not specifically forbid one president from undoing another’s monument, but it also does not say that it can be done or how it could be. Presidents have occasionally changed an existing monument’s boundary, but have avoided trying to overturn one – partly because setting such a precedent could mean presidents creating and undoing each other’s monuments willy-nilly. It’s expected that if Trump attempts to unilaterally unwrite monument proclamations, the effort will wind up in the Supreme Court.

But Congress could overturn a monument as well as the Antiquities Act itself, and many speakers in Monticello supported doing so.

Commissioner Phil Lyman called on his fellow commissioners, the sheriff, the governor, state legislators and other elected representatives, and Trump to “reverse midnight Maui executive orders,” a reference to the fact that Obama was in Hawaii when the proclamation was made. Obama also designated a 300,000-acre monument in Nevada on the same day.

Lyman, who led a protest ATV ride through Recapture Canyon on BLM land in 2014 and spent 10 days in jail for it, took time to lambaste the media for its coverage of issues in southeast Utah, which he termed “lies, lies and more lies.” He said the press fails to report on “the false narratives of environmentalists,” a remark that drew a host of cheers.

He had plenty of criticism for the Obama administration as well, saying the monument designation was “designed to incite.”

“This is not a government of or by the people,” he continued, ending his comments with, “President Trump, trump this monument!”, which drew loud applause.

Merri Shumway, vice president of the San Juan School District board, said she was speaking for generations of schoolchildren in the county and voiced concern about how the monument might affect funding for education.

The proclamation calls for the Interior Secretary to state School and Institutional Trust Lands Administration to examine how SITLA holdings within the monument might be swapped for federal public lands of equal value elsewhere. Shumway said the trades might result in a loss of property-tax revenues for the school district .

“I appeal to the state and SITLA not to trade,” she said.

Monticello Mayor Tim Young said locals are the stewards of public lands including the Bears Ears region, and “it’s pristine because we take care of it.”

Although the monument’s creation was called for by a coalition of five Indian tribes in the region, a contingent of Native Americans came to the protest to say they did not support the designation nor the intertribal coalition. Eighty-seven- year-old Betty Jones, speaking in Navajo (later translated), said she believes Obama may not even be human and that he “has stolen our land.”

The land in question has not changed hands; it will continue to be managed by the BLM and the Forest Service, with advice from a commission made up of one representative each from the Navajo Nation, Hopi Nation, Ute Mountain Ute Tribe, Ute Indian Tribe of the Uintah Ouray, and Zuni Tribe — the members of the intertribal coalition that had sought the designation.

However, some tribal members living close to the area fear that changes in management could result in diminished access for them.

Suzy Johnson charged that Obama had “failed the grassroots natives” and had “taken” Native American grazing areas, watering holes, hunting grounds, and firewood. “Your name and signature will perish with the wind and set with the sun forever,” Johnson said.