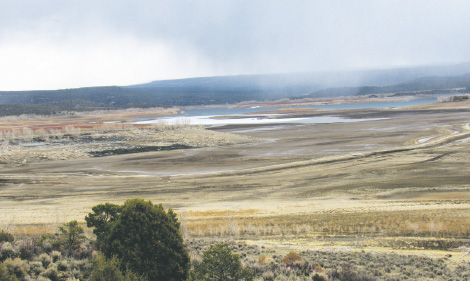 It’s 1956, we are driving our car across the Mexican border into Nogales, Sonora. Look, there is a parking place near some shops. We get out, lock the car and immediately a young boy comes up and offers to “watch our car” for us. He will “protect” it for 50 cents until we get back. We had some fairly nice hub caps so decided it was a wise invest­ment, so gave him $1 to make sure. He did well, our hub caps were still there when we got back. Yeah, we knew it was a protection racket. Then there are the stories of the mob offering to “protect” a small business from a known arsonist in the area, for a small cost. It only took one who refused the “protection” for the others to decide to “hire” the services.

Recently we read where Obama “pro­tected” thousands of acres of states’ lands by declaring them a national monument. They claim the Colorado Roadless Rule will “protect” 4.8 million acres. We pay for car­bon credits, to “protect” the earth from cli­mate change. There is the spotted owl and of course the Mexican Jumping mouse which we are told need to be “protected.” Do you ever wonder how stating that there might be some potential habitat for a mouse, bird or bug works to miraculously “protect” or “save” it? Shucks, they don’t know how many there are or where they are! How do they know if a mouse is endangered, and then who cares? My cat loves them. The World Wildlife Fund claims 200-2000 species go ex­tinct every year, however In 1980, in Panama they found 1,800 new species of beetles they didn’t know existed, on just 19 trees. The World Resources Institute stated, “Surpris­ingly, scientists have a better understanding of how many stars there are in the galaxy than how many species there are on Earth.” Sooo, how do they “know” how many, if any, species are going extinct? Fact is they don’t! So how do they “protect” something they don’t know exists, or that it needs or can be “protected”? They don’t! Are they trying to override nature’s law of “survival of the fittest” and evolution’s rule of “natural selection”?

I have wondered just what is being “protected” from whom or what? That of course raises the question of What is protection? The dic­tionary Refers to it as “something that keeps a person or thing from being harmed, lost, etc.”. Does designating public lands as wildernesses, national monuments, Natural Conservation Areas or parks, etc., “protect” them from harm or loss? What does it protect them from? Does it protect them from wildfires, Insects and disease, dying of old age, wind storms, landslides, earthquakes, floods, etc.? Nope! Wait, It “protects” from nasty drilling, right? Did you know right here in Montezuma County there have been over 900 oil and gas wells drilled over the past 70 years? About 120 are active and producing jobs and wealth for the county residents. Where are the 780 old wells? Don’t know, do you? What “harm, loss or damage” was done from drilling? Noth­ing! So what do these designations “protect” them from? YOU! They are protected from YOU enjoying and managing them for in­creased land and resource health and wisely using parts of them for betterment of the lives of you and your neighbors and the rest of the county and state.

Our local San Juan National Forest is com­posed of about 1.9 million acres. In the past, environmental corporations had about 22 percent of it “protected” as wilderness areas. Recently they got 32 percent more “protect­ed” as roadless areas, which are quasi wilder­ness. Together about 54 percent of the For­est, 1+ million acres, has been “protected” from most of the public, you, resource man­agement and health improvement.

So why are the so-called “environmen­tal/conservation” corporations pushing for more wilderness, monuments and endan­gered species “protection,” less recreation use, and no drilling and other economic uses? Well, there is only one thing left that has not been mentioned. It is the old classic of “fol­low the money.” The “environment” is the tool the corporations use to incite emotions to bring in money for them to claim to “pro­tect” something that is nebulous in people’s minds, knowing the people will respond to a declared “crisis” that needs their support, especially their money. As one of the sup­porters, you will sleep much better believing you helped save the planet that has existed millennia before and will be here millennia after your dust spot in time ceases to exist. That is the “protection business” the corpo­rations are in. Nothing has been or is “saved” or “pro­tected” by the environmental corporations. Wildfires still burn more wilderness and “protected” areas every year. Insects and disease has devastated vast acres of spruce and pine timber throughout the state and continues. One thing that has actually been protected is the income of the environmen­tal corporations that promote leaving the land and resources to stagnate, die, burn off and be wasted. The 2014 IRS 501(C3) re­cords shows one of the larger environmental corporations receives over $14 million a year and pays the chief fundraiser about $900,000 a year. These corporations lobby Congress, legislators and agencies for laws, rules and actions that can be used to convince you to send them more money to “protect” the environment from the public and resource managers, while the land manager gets the blame when the resource is not “protected.” The “environmental movement” is today’s “protection racket”! The resources lose and are harmed, and the people lose.

Do we want to truly “protect” our re­sources and economic lives? Then it is time to let the professional resource managers manage the forest, range, water, and minerals to improve them, free from the environmen­tal corporations “protection rackets”.