Renew works to rebound after tumult: The nonprofit is seeking a new board and new director following charges against Beene 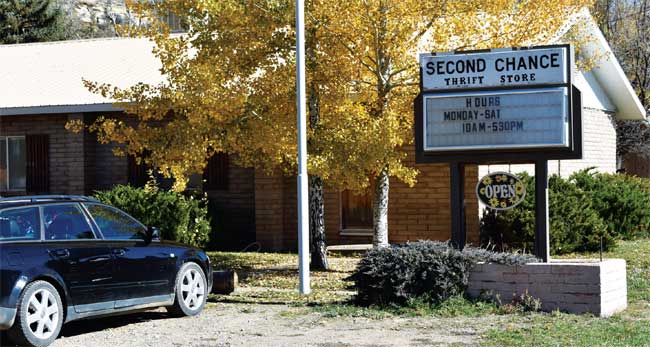 The Second Chance Thrift Store, which is operated by Renew, has been doing a brisk business
after the departure of the nonprofit’s former director. Photo by David Long.

Renew, Inc., a Montezuma County nonprofit dedicated to helping victims of domestic violence and sexual assault turn their lives around, is itself undergoing a major renewal after a period of upheaval, sparked when its longtime former director was accused of stealing from the organization.

Renew has operated WINGS, a safehouse for abused women in Cortez, for about two decades, and provides a 24- hour hotline and counseling services for these survivors as well. It also runs Second Chance Thrift Store in Dolores, which sells donated items to help support these services.

But in August, in a story broken by the Four Corners Free Press, former director Cheryl Beene was charged with felony theft following a lengthy investigation by the Montezuma County Sheriff ’s Office. Beene, 60, is accused of taking numerous donated items intended for the thrift store and shelter for her personal use, as well as monetary donations she allegedly spent for meals and other personal wants (Four Corners Free Press, September 2018).

Beene, who was fired shortly thereafter, has been bound over to district court for arraignment on Nov. 20.

This shocking development was followed by a stormy meeting of Renew’s board of directors on Sept. 18, during which several staff members as well as board member Dena Guttridge demanded the resignations of five other board members in lengthy written statements cataloguing the problems and shortcomings besetting the organization. Their complaints were forwarded to local press outlets as well.

The laundry list of grievances emphasized the board’s lax oversight of Renew and Beene as well as her “gross mismanagement” of the organization.

The previous board had given the director “a glowing review in May 2018 without even visiting the agency or speaking to staff,” the letter stated, “while Beene was stealing funds and goods, treating clients with disrespect and using emotionally abusive behavior against the staff.”

Other shortcomings outlined in the letter concerned the board’s alleged lack of familiarity with the staff and budget issues, mishandling of personnel matters and lack of fundraising efforts. It asked for and received the resignation of the five members.

Now, the 501(c)3 is developing a new approach to its mission that Rose Jergen, its interim director, firmly believes can rescue the organization from a sea of troubles brought about mostly by what she believes was a dearth of oversight.

“We’re working fast and hard,” Jergen said. “I think we have the brain power to do that,” especially with the support of District Attorney Will Furse, the directors of Montezuma and Dolores counties’ social service programs and several other local nonprofits.

Jergen, herself the full-time director of the Four Corners Child Advocacy Center, is volunteering her time and energy to get Renew back on solid footing.

“We were able to develop an advisory committee that’s made up of quite a few of the leaders in the community who understand the value of the service, so it became a top priority to do everything we can to keep it open,” Jergen said.

“That means having committees who are working on projects that are guided and directed by some of our funders asking for specific things to be completed – reviewing financials and policies – using best-practice approaches, so that has been a community effort.” Jergen said they have set goals in three-month intervals.

“Best-case scenario, we would have a full board seated and all these (new) policy pieces in place by the end of the year and be ready to hire a permanent director.”

Jergen said the staff has been “amazing.”

“I stepped in and it’s just been business as usual. They’re working very hard to maintain the highest quality of services they can under the circumstances.

“I’m pretty impressed, honestly – it kind of goes without question that there’s been no lapse in services.”

WINGS can accommodate up to six clients, Jergen said, and is currently at capacity, although one room is kept for emergency referrals. Clients are housed in individual quarters akin to efficiency apartments and share a common kitchen.

“Since (the September board meeting) we’ve had the resignations of past board members and we’ve been fairly quickly bringing on a transitional board,” she said. “At this point they are tasked with making sure that there’s going to be some implementation of new fiscal policies and new personnel policies, or at least reviewing and revising and making sure those are up to standard.”

Then there’s the process of choosing a new board of knowledgeable, high-energy people.

“It’s almost as if it’s going to be a new organization, so they’re going to have to be extremely committed to hard work at first. I would advise anyone interested to apply,” she said.

“But we’re not looking for just warm bodies – we want people who can come in here and provide that fiscal oversight and governance and make sure we’re doing some really amazing fundraising efforts. This is going to require some work.”

She said the thrift store has been doing exceptionally well lately, possibly because people are shopping there as a way of showing community support for Renew in light of its recent trouble. ”They said they had two record days within the last couple weeks – $600 days – that’s huge! And they were just random days in the middle of the week. We’re finding that thrift store is a gold mine.

“I’m hoping people are shopping there because they understand the need and are seeing some of this stuff in the media and wanting to support us,” she added. “That awareness is something important for us to spread.”

Still, beyond that source of revenue, plans for some major local fundraisers need to be developed, she said.

“One thing I think is important is that diversification of funding – so there’s a bigger percentage of funding coming in from builders in the community as opposed to depending on grant funding.

She said ideally 50 to 60 percent of Renew’s operating budget would be derived from local funding.

She expressed confidence that Renew’s future will be bright. “It’s our sheer determination that we’re going to make this place bigger and better than it was.”