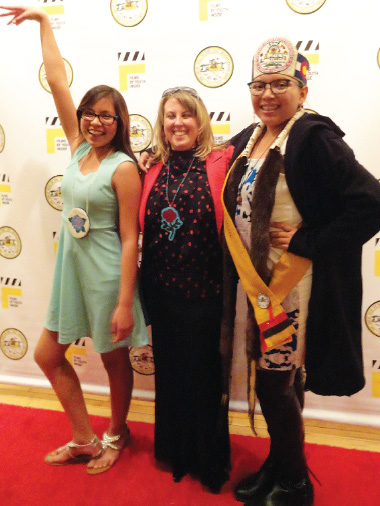 The Ute Mountain Ute community celebrated the Feb. 26 premiere of “The Strength of Siblings” in style. Rebecca Gardner, director of the Recidivism Reduction Initiative for the tribe, was invited to share the spotlight with filmmakers DeAndra Eaglefeather, left, and Talia Whyte. “Siblings” was the result of the second youth film-making workshop taught by Films by Youth Inside and funded by the initiative, a program of the Bureau of Indian Affairs Office of Justice. Photo by Sonja Horoshko.

The Ute Mountain Ute Tribe is addressing the problem of chronic substance abuse and criminal behavior with a wide range of measures designed to encourage individuals to make healthier lifestyle choices.

The Recidivism Reduction Initiative, a program offered through the Bureau of Indian Affairs Office of Justice Services, identifies groups of individuals incarcerated at adult and juvenile detention facilities who are at high risk for relapse into criminal behavior.

One result of that effort has been the Films by Youth Inside workshop, which teaches filmmaking skills to Towaoc youths who create their own movies.

The youths recently produced their second film, “The Strength of Siblings,” which premiered to a packed Sunflower Theatre in Cortez on Feb. 26.

Recidivism, one of the most fundamental concepts in criminal justice, is measured by criminal acts that result in rearrest, reconviction or return to prison with or without a new sentence during a three-year period following the prisoner’s release.

The rate of recidivism in Indian country is greater than the national non-Native rate. But the higher percentage can be distorted by factors that affect the choices available to Native Americans. Unemployment on reservations is sometimes nine times the national rate. Higher education and vocational training are scarce on isolated tribal lands, and access to career opportunities is complicated by poor roads and lack of infrastructure such as internet and telephone service — conveniences that most people take for granted.

Funding for the Recidivism Reduction Initiative, or RRI, at Towaoc resulted from the tribe’s efforts to identify approaches to recidivism reduction from the Ute cultural and judicial point of view.

The tribe and RRI Director Rebecca Gardner built a two-year cohort study around 70 individuals with the highest rate of recidivism in the community. The group included 12 juveniles.

“We first needed to establish a recidivism baseline,” Gardner explained. “We followed them through behavioral and psychological assessments in order to determine what could work to help reduce recidivism, why it could work and what approaches would truly address the issue from the Native point of view, and in particular, the UMU experience.”

Gardner says the rearrest rate dropped by 35 percent during the first two years of the assessment, and the attention the group was receiving was believed to be a factor. The tribe and RRI developed plans around the main contributing factors. “We worked with the individuals, families, community, and the tribe to build programs that would fit their needs – prevention and intervention among them.”

Although their proposal was built around many judicial-system and behavioral components, the plan included a workshop to mentor youths in filmmaking while creating a platform that could enhance critical choice-making skills.

The films would address recidivism, but decisions about the storylines and all the film-making work would be youth-driven – their point of view and their stories about behavior that puts them and their families at risk.

The BIA Office of Justice is on the right track, Gardener said. “For the first time the federal government isn’t controlling the tribe’s actions or choices.

Instead, the department asks the tribes to come up with answers to recidivism issues from their own community. “In the true spirit of self-determinism the government is asking the tribes to decide what’s best for them.”

Alex Muñoz, a director and filmmaker who has shaped part of his awardwinning career while working with prison inmates and underclass populations, teaches the film-making seminar at Towaoc. “We’re not making ‘film as commerce’ as I was taught at the University of Southern California film school. Instead, this is authentic representation, community empowerment through ethnographic realism,” said Muñoz, the founder of Films by Youth Inside.

The RRI funded the film project after youths identified the need to tell stories around recidivism in their lives. Some members of the youth group are juvenile offenders, but most are explaining how their lives are impacted by repeated criminal and abusive behavior and bad choices by people they love.

A crew of camera and sound technicians, make-up and writing professionals comes with Muñoz. They bring a professional tone to the classroom at Towaoc where the youths begin learning the specialized aspects of film production through a hands-on approach.

Production responsibilities transfer to life-skills, Gardener explained. The first part is in the classroom where they begin to feel comfortable with activities that build confidence, at ease with asking questions and working as a team. “The classroom project and the filming is hard work,” she said. “They must commit to being on time, yet be patient after they hurry up and then wait during reshoots to get it right. They also begin to value the process of other team members, to be silent, aware of the other people in the crew and respectful.”

The crew teaches them complex filmmaking skills, and then steps back while the youths write, produce, direct, maintain and work the camera and sound equipment. They also assess the quality of the storyline. They aren’t afraid to do retakes to strengthen the acting or redo make-up and costuming.

The Towaoc film-makers reconvened in July 2016 to work on “The Strength of Siblings.” It was finished in two weeks. Grim and unflinchingly honest, with amazingly natural performances by the young actors, the 32-minute work shows the effect a meth user has on his own family. “They said that they wanted to make the story from their point of view, not the establishment’s view of them,” said Muñoz.

The workshop is only one of numerous approaches funded by the $250,000 annual grant to the Towaoc RRI. But the youth film project aims to support behavioral choices to prevent youths from committing offenses that could put them in detention facilities. The film narrative may keep others from going down the wrong road, Gardner explained, and it seems to be working.

Now that the workshop is in its second year, it has become a vigorous force in the community.

“We have learned that continuity matters,” Gardner said. “We know that the film project and the production team is a positive presence in their lives, and now the families feel it, too.

“We try to apply this lesson with other re-offender programs, to be present with them, consistent. In the film project we continue to support the youth even when the film is finished because they appreciate and respond to positive reinforcement.”

RRI intends to stay the course after the project is over. Financing helps implement the plans and connect recidivism issues to communitybased solutions, but RRI is also committed to sharing and evaluating the results, making it an even more positive force for recidivism clients and their families.

The Farm Bistro hosted a reception after the premier of The Strength of Siblings. The atmosphere was filled with the sweet scent of success as family and friends, actors, tribal and federal officials celebrated the second completed youth film project.

At the reception Muñoz told the Free Press that he has learned through his filmmaking projects that once the rage of the underclasses is filmed, finished and shown on the big screen, it renders the behavior unrepeatable. “It shifts behavior. We’re not making Hollywood films. We’re making transformation through the arts,” he said.

Rod Robinson, Office of Justice Initiative coordinator with the Ute Mountain Ute program, explained that the Towoac RRI is getting positive results. It’s consistent, he said.

“Funding for the program is not likely to go away. The project is giving youth a voice. It’s making a difference in the recidivism rates because the youth are telling us the reality of their lifestyles,” and what positive behavioral change looks like.