Rule is proud of board service, hiring choices

If you think Montezuma County needs radical changes, don’t look to Larrie Rule to bring them about. While the incumbent commissioner believes the county has its fair share of problems and concerns, he doesn’t think it needs a major overhaul.

“I’m not one who wants to change the county,” Rule told the Free Press. “I love this place. 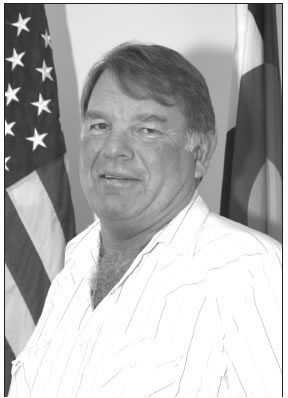 “I’ve worked in a lot of different spots over the years but I’ve always lived here, and there’s no better place to live in than Montezuma County.”

Rule, 60, is seeking a second term on the commission. He faces a challenge in the Republican primary in August from Danny Wilkin, a developer and homebuilder. The winner will run against Democrat Fred Blackburn in November.

Rule lives with his wife, Pat, on County Road L in a house his father built in 1956 in Dolores. Rule represents District 2 of the three commission districts, the Cortez area.

He’s proud of Montezuma County and believes its charms far outweigh its drawbacks. “We don’t have all the facilities like Farmington and Montrose, but that will all come in time,” he said. “To say, ‘I want to change the whole character of Montezuma County’ is not what people want. That’s why people move here, because they like it.

“But there are some who want to change it to what it was like where they came from.”

During Rule’s years in office, there have indeed been calls for change, particularly involving the county’s land-use policies. Rule and his fellow commissioners have taken flak for approving some controversial developments, including the 36-lot Summerhaven subdivision on Granath Mesa north of Dolores this year, a gravel pit on agricultural land near Lewis and a warehouse expansion near Mancos. The latter two permits were both later overturned by the Colorado Court of Appeals.

Rule was not on the board when the warehouse expansion was approved, but he believes the county was justified in approving the gravel pit. “Gravel’s where you find it,” he said. “You can’t just put a gravel pit wherever you want to.”

Concerning Granath Mesa, Rule said he couldn’t see that it was worse to approve a subdivision containing three-acre lots than one with 10- acre lots. And leaving the area full of large tracts is no guarantee it will be pristine, he said.

“At least with a subdivision, you have roads and covenants,” he said. “Those people with 35-acre tracts, they split off 10 acres at a time, and you don’t get better roads, and there’s no covenants saying people have to clean things up.”

Rule acknowledges that there are problems with the land-use code and the county’s Landowner-Initiated Zoning system. He has called for a town meeting at which citizens would give suggestions regarding how to handle zoning.

“The land-use code needs to be revisited all the time,” Rule said. “There are issues that need fixing to make the process better for everybody. There will always be some changes.” Still, he thinks the code is basically sound.

In line with that, the commissioners have taken a tough stance against people who violate the code. In 2006, they fined Wilkin — Rule’s current opponent — $7,500 for building a house too close to the Dolores River in violation of county regulations. Recently they also ordered a man to stop construction on a commercial storage facility until he had obtained a high-impact permit.

People accuse the commissioners of not enforcing the code fairly, Rule said, “but we do. You just have to get caught. We can’t know everything that’s going on in the county without a full-fledged building department.”

In 2006, the board also put a halt to the Rally in the Rockies, a motorcycle rally slated over Labor Day weekend at Echo Basin Ranch near Mancos. Because the rally was scheduled at the last minute, the commissioners refused to give it a high-impact permit after hearing concerns from a slew of citizens and law-enforcement officials.

When the organizers said they were going ahead with the rally anyway, the commissioners took them to court and obtained a preliminary injunction that put a halt to the activities.

“I always said I’d never vote against a motorcycle rally, because of the economic development,” Rule said. “But at the end, we did the right thing. They come in and slapped us in the face and told us they were going to do it any way. And when you got 80 people that’s fighting it, you can’t do that.

“I hated it, though, because I rode a bike about all my life.”

Rule said the situation worked out for the best, with a locally organized rally, Sugar Pine, now taking place at another site every year. “They’ve done everything we asked and it worked out real good,” he said.

Land use takes about half the commissioners’ time, Rule said, but there are plenty of other issues they deal with, something people don’t always realize. One of the first decisions the board had to make, in March 2005, was appointing a sheriff to replace Joey Chavez, who had resigned. The board caused some controversy by hiring Gerald Wallace from outside the sheriff’s department, but Rule believes it was a smart move.

“We felt like [the department] needed an upgrade, and that’s why we appointed a new sheriff,” he said. “I think people have really been tickled with that. I think we done the right move there.” Wallace has proven enormously popular, winning election in 2006 with 81 percent of the vote.

Among the board’s other accomplishments during his term, Rule said, are:

• Arranging for 44 miles of gravel roads to be chip-sealed, using grant monies.

• Choosing Ashton Harrison as county administrator after Tom Weaver resigned. “I think we made the right choice there, too,” Rule said.

• Working to improve the fairgrounds, including getting the race track back in commission this year and getting bleachers built with grant money. Rule is the commissioner most responsible for fairgrounds issues. Instead of a single fairgrounds manager, there are now three people sharing tasks, “so there’s somebody there all the time during the day,” he said.

Among Rule’s personal accomplishments, he said, is serving on nine boards besides the commission: The San Juan Basin Area Agency on Aging, Housing Solutions of the Southwest, Montezuma County Housing Authority, TRP Transportation, Club 20, Senior Services and Senior Advisory boards. Rule is the county liaison to the Cortez Chamber of Commerce and Mesa Verde Country as well.

He says he never misses a meeting unless he’s sick or there is a conflict with another meeting. “I feel like I have to go to them all.”

If re-elected, Rule has several priorities he would like to work on:

• Continuing to improve the fairgrounds and making it self-sustaining. “We use most of our discretionary money to run the fairgrounds,” Rule said. Much of that is lottery funds, but it also includes some general revenues. “To me you shouldn’t be putting all that money in there, but that’s what they’ve been doing for a number of years. That’s why I’m working to get different things at the fairgrounds, so it can start to pay for itself and then you can help other groups.”

• Improving the sometimes-strained relations between the county and the municipalities. Rule believes he has already made steps in that regard. “I have a good relationship with Jay Harrington [Cortez’s new city manager], and I get along with most of the people on the city council. Orly [Lucero, the mayor} and I talk often.

“My big thing is trying to work with everybody.”

Rule said he and Administrator Harrison went to a “meet and greet” for the finalists for city manager. “We walked in there and everybody looked at us,” he recalled. “But Jay thought it was good that we were there.”

• Supporting traditional uses in Canyons of the Ancients National Monument. Rule, along with his fellow commissioners, believes the monument’s new management plan is too tough on grazing and oil- and gasdrilling. “We believe the land should be preserved, but the issue we’re having is the [monument] proclamation said whatever’s happening can continue. That includes grazing and drilling. As far as I’m concerned, grazing is the best thing for the monument because it keeps the weeds down and that helps reduce wildfires.

“And drilling — 41 percent of our [property-tax] money comes from drilling. What happens if Kinder Morgan’s not here?”

• Finding a solution for the increasing space needs of law enforcement, the courts, and the jail.

One thing Rule doesn’t expect to see in the future is county-commission meetings occurring in the evening, as some citizens would like. He said having too many people in the audience prevents much from getting done.

“We go there as commissioners to conduct business. How do you have 50 people in the audience and have a meeting?”

He said there could be a daytime Monday meeting and another at night, but the clerk would have to be at both to take minutes, and the commissioners would need access to staff for files and information. Otherwise, decisions would just have to be postponed.

Rule said people would eventually lose interest in coming to the lengthy meetings anyway. “Six months later, there wouldn’t be anybody there,” he said.

“I think if you’re totally concerned about something, you’re going to be there [in the daytime].”

Rule knows some of the board’s decisions have angered citizens. People on Granath Mesa are upset over the approval of Summerhaven, others are peeved at the recent approval of a gravel operation near Mancos, and — in the opposite regard — owners and operators of the Noland gravel pit near Mancos are angry because the board is insisting Noland Inc. seek a high-impact permit for its asphalt plant after neighbors complained about the smell last summer.

“I’ve been friendly with Rick Noland [the pit owner] for years, but I think what he did was wrong,” Rule said. “I tried to tell Rick, ‘You clean it up — you can’t do what you’re doing every day to those people’.”

He said he comes to meetings with an open mind. “You can’t have an agenda when you go into this job, and I don’t. You have to take the issues as they come.

“I can’t make everybody happy, but my phone is open to everybody, and I try to listen, even if people don’t always like what I have to say.