Colorado’s sprawling 3rd Congressional District spans 54,100 square miles and a diverse population that includes blue-collar Democrats in Pueblo, staunch conservatives on the Western Slope, and a large number of independents.

John Salazar believes he’s the right person to represent the district because he walks a moderate path. 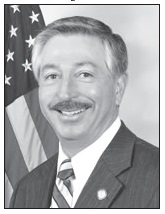 “I’m not about being far left or far right,” said the 57-year-old from Manassa, one of only a half-dozen active farmers in Congress. He noted that National Journal Magazine, a non-partisan publication, rated him this year as one of the most centrist members of Congress, based on his roll-call votes.

“It’s a hard district to represent. You can’t be an extremist and represent all the people,” Salazar told the Free Press in a phone interview Sept. 22. “A centrist reaches to both sides and tries to build consensus.”

Salazar, one of the fiscally conservative Democrats known as Blue Dogs, was elected to Congress in 2004 and returned to office by large margins in the next two elections. In 2006, he defeated Cortez Republican Scott Tipton 62 to 37 percent.

Tipton is challenging him again, and this time around, the rematch looks a lot tighter. Tipton is waging a strong campaign, bolstered by voter antagonism toward incumbents, help from Republican strategist Karl Rove, and the endorsement of Sarah Palin.

But Salazar has the backing of groups ranging from the National Rifle Association to the Colorado Fraternal Order of Police and several farm organizations, further demonstrating his moderate approach.

“Nobody has ever heard me get on the House floor and beat up Republicans,” Salazar said. “I think the Third District needs someone who can work with both sides of the aisle.”

Salazar has certainly voted both sides of the aisle during his tenure. He said no to some measures popular with Democrats, such as cap-and-trade legislation to rein in greenhouse-gas emissions and the $700 billion bank-bailout bill. But he voted in favor of Obama’s health-care bill and, more recently, toed the party line in letting the House adjourn without voting on whether to let the Bush tax cuts expire. Salazar has called for a one-year extension for the tax cuts.

Salazar said he has no regrets about supporting health-care legislation, labeling it “the largest deficit-reduction measure ever.”

“The Congressional Budget Office had told us if we didn’t deal with the upward spiral in health-care costs, we would end up bankrupting our Medicare by 2018,”he said. “We had to do something.”

If implemented as written, the bill will cut spending by $1.2 trillion over the next decade, he said. But more can be done to cut health-care costs – such as allowing the government to negotiate drug prices, something currently forbidden under legislation passed in 2003. Salazar himself sponsored such a measure.

“I’m pushing to allow Health and Human Services to negotiate prescription-drug prices with pharmaceutical companies,” Salazar said, “because the VA pays sometimes less than half what Medicare does for the same drugs from the same company.”

That could save $100 billion a year in three years, he said. Without changes, Medicare will soon be spending $189 billion annually on prescription drugs. “We should use that power to negotiate lower prices.”

Salazar said he also supports allowing prescription drugs to be purchased from Canada, where they are cheaper. “I’m all for it,” he said. “They’d have to be administered through the FDA and I don’t know what jurisdiction they have over it – that’s always been the argument. But a lot of those drugs come from the same exact companies that produce them for the U.S.”

Salazar supported the idea of a “public option” – a government-run insurance option – though the final health-care bill did not include such an option. However, he said the final bill accomplished much of what a public option would have done. “What we’re trying to do is create competition among insurance companies,” he said. “We do that through health-insurance exchanges.”

The exchanges created a government managed exchange in which private companies will compete for clients among individuals and small businesses. The plans in the exchange must be “transparent” so consumers can easily compare their options, and must meet certain standards, such as covering preventive care and not excluding people with pre-existing conditions.

“Once we create those insurance exchanges, everyone will be competing for a basic health-care plan. People will go with the best insurance plan and the one that suits them the best,” Salazar said. “The biggest problem is we have some states resisting even the health-insurance exchanges. We do what we can. The most important thing is that we find those savings so we can provide a health-care system that middle-income people can afford.”

On the issue of medical marijuana, which has been legalized by 14 states so far, Salazar said he is happy to let the states decide, despite the fact that marijuana remains illegal under federal law. “I don’t know there is that much of a conflict. The states have the right to do whatever they need. I support what the states do.”

On an even hotter issue, illegal immigration, Salazar said progress is at a “stalemate.” “I don’t know if it’s ever going to get resolved.” He supports legislation that would beef up border security, allow some illegal immigrants to become legal members of the work force, and provide for a guest-worker program.

“First, we need stronger border security, but the most important thing is we need to require, and I mean require, illegal immigrants to become legal by passing a background check, paying all back taxes, learning English. And we need a tamperproof ID system to give employers the ability to know if they’re legal.

“The one thing we don’t need is to pass separate immigration laws in every state [like Arizona’s]. Immigration is under the jurisdiction of the federal government.”

Salazar said Arizona Sen. John McCain has supported reasonable measures to deal with immigration but had to do a “flip-flop” this year because of political pressure. “I’m hoping that once the political season is over, we can sit down and talk.”

Salazar said there are some exaggerated fears about illegal immigration.

“We’re a country of immigrants. I would say the large portion or a lot of immigrants, whether legal or illegal, are paying Social Security taxes and taxes they never reclaim. I’ve seen studies showing that it would have a devastating effect on the economy if these folks weren’t here to be able to help us raise our crops and put them in the bin and get them to the store shelves. I don’t think they’re as big a drain as people make them out to be.

“We do need to make sure our country is secure. I haven’t seen any terrorists coming from the southern border but there have been some attempts on the northern border.”

As a fiscal conservative, Salazar supports PAYGO legislation, which was in effect in the 1990s. PAYGO said that Congress can approve no spending increases or tax cuts unless they are paid for by taking something else out of the budget.

“When they allowed those rules to lapse in 2002, we pushed this country into deficit spending. Some terrible problems have happened during the past 10 years.

“Under the last president we had the largest tax cut in history, which is fine, except following that we had 9-11. We had to create another department, Homeland Security. We borrowed the money from China. And we had to fund two wars.”

Balancing the budget and getting people back to work are two of the major issues Salazar wants to work on if re-elected. “We are adamant about looking at the recommendations of the President’s commission on debt reduction.”

Salazar is proud of his accomplishments, including helping secure $1.75 million for the Jackson Gulch Rehabilitation Project to repair infrastructure carrying water to the town of Mancos, Mesa Verde National Park, the Mancos Water Conservancy District, and the Mancos Rural Water Company.

Salazar also helped get nearly $300,000 in stimulus money for the San Juan Bioenergy Plant in Dove Creek and funding for the massive Lower Arkansas Valley conduit to provide drinking water for 40 counties.

“I’ve been fighting for my district hard over the last six years. There’s a lot of people that think there’s a lot of pork coming here, but these projects have been badly needed.”

Salazar is a staunch foe of the expansion of the Army’s Piñon Canyon Maneuver Site near Pueblo because it would mean condemnation of private land. “I want to protect the ranchers in the Piñon Canyon area. We have created a one-year funding ban so the Army can’t condemn those properties. Those folks are really suffering because of the threat of condemnation.”

He has also made veterans’ issues a priority, pushing for guaranteed funding for the VA health-care system and sponsoring the 2006 bill that made it a federal crime to wear false combat medals. He is sponsoring legislation to get federal money to help Durango’s Fort Lewis College pay the tuition for Native Americans students there.

But the current acrimonious political climate causes him some frustration.

“I could walk on water and I’d be criticized for not swimming,” he said, echoing a comment he made at a recent debate in Grand Junction regarding the current antiincumbent mood in the country.

Salazar is a member of the House Committee on Appropriations and the Energy and Water Development and Military Construction/ Veterans Affairs subcommittees.

He said he is task-oriented.

“I’m a farmer. I’m a worker. When I get on a tractor or a horse I like to look back at the day and see results.”