Saving dogs and cats in Towaoc

It’s a frosty November morning in Towaoc, and a handful of people are hard at work. 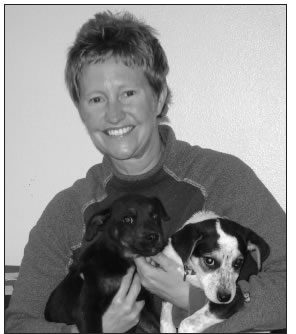 Wendy Haugen, executive director of the Foundation for the Protection of Animals, cuddles two strays rescued on the Ute Mountain Ute Reservation by its animal-control personnel. The tribe is working with Haugen’s foundation and For Pets’ Sake Humane Society to sponsor a twice-monthly spaying-neutering clinic to reduce pet overpopulation on the reservation. Photo by Gail Brinkly.

Dr. Susan Grabbe’s mobile veterinary clinic, housed in a van, is parked outside a small former office building that serves as the Ute Mountain Ute Tribe’s animal shelter. An extension cord stretches out the door from the building and is plugged into a port in the side of the van.

Within the shelter, electric heaters are belching out hot air to dispel the chill in the central room, whose barebones furnishings consist of a table, a few chairs, and a plethora of pet carriers, some housing dogs or cats, some empty.

It’s time for the reservation’s twice-monthly spay and neuter clinic, an effort undertaken by the Ute Mountain Ute Tribe, For Pets’ Sake Humane Society and the Durango-based Foundation for the Protection of Animals in an effort to reduce pet population on the reservation and find homes for rescued strays.

It’s 8:30 when I arrive, but already the operation is in full swing. One dog is out in the van, being spayed. Wendy Haugen, executive director of the foundation, and Bill Williams, board member of For Pets’ Sake, are organizing paperwork.

George Wells, director of the tribe’s Wildlife Services Division, walks in the door, which is cracked open by the extension cord. “How about putting a sheet over this to keep it warmer?” he suggests, and goes in search of duct tape or tacks.

The rest of us set out to see which animals are being housed in the other rooms. All have their own little stories. Behind one door are stacked cages for small dogs. Today there are four young puppies, short-haired and mottled brown and black. “I think they’re border- collie mix,” Haugen says.

In another room are two cats, a plump Siamese male and a gray-andwhite female. Both are very friendly, purring loudly when picked up. They are “surrenders” — house pets given up by an owner who moved.

“There are so many cats, it’s hard to find homes for them,” Haugen says sadly. “We did have four beautiful, healthy kittens here last time and they went to Marian [Rohman, president of the For Pets’ Sake board] and they may be adopted at the adopt-a-thon this weekend.”

In a back room is a shy but pretty dog, medium-sized, short-haired and rangy. Her paws are white; the rest of her is tan with brown stripes. When I ask what breed she might be, Haugen laughs. “I think she’s 100 percent reservation dog! She might have some border collie, maybe some boxer.” To me she looks part greyhound as well.

In yet another room is a puppy that everyone is hesitant to pick up because it tried to bite Wells when he rounded it up on the reservation.

Last, we discover a little black dog with a very long snout, huddled timidly in the back of a big carrier in a hall. He was so still, we didn’t notice him at first.

Wells calls him “Jungle Dog” because he was found living under a dead bush. “He had a little tunnel in the branches under there. It was real hard to get him out,” Wells says.

Wells is a jovial jokester who likes to reminisce about the days when there was a trading post in Towaoc. As a boy, he used to listen to the elders who gathered there to drink coffee and swap tales, all speaking in Ute. “It’s not like that any more,” he sighs.

Back in the main room, Stephanie Collins joins Haugen and Williams in doing paperwork and tending to the animals. Collins, a young woman living in Shiprock, N.M., was hired as the tribe’s animal-control officer in October. She is taking classes at Diné College and studying to become a veterinarian.

A woman comes in to drop off a female Airedale and a male Pekinese/dachshund to be fixed. The procedure will be done for free. “They’ll be ready after 4,” Haugen tells her, and the woman kisses the dogs and leaves.

The clinic has been in operation for five or six years, Williams says. It started when his wife was working for the tribe and began taking home some of the more adoptable dogs she saw running loose and getting them fixed.

Williams, who does grant-writing for For Pets’ Sake, says the first time the organization applied for a grant from the Colorado Pet Overpopulation Fund, it included a component to do spaying and neutering on the reservation. “We have been earmarking 25 percent of whatever we get for Towaoc, to do free spaying and neutering here to help the community,”

Williams says. Once or twice a month on Thursdays from September through May, the clinic is in operation; 10 to 15 animals a time are spayed or neutered.

“Last year we had enough money to do two clinics a month,” Williams says. ”At this point we’re a little low, but Wendy’s going to give us some money. She’s been very generous.”

Haugen came to Durango from Portland, Ore., in January 2007. An animal- lover all her life, she has worked as a veterinary assistant, a zookeeper in Chicago, and an animal-control officer in Madison, Wis., and then in Portland.

When her stepmother died of lung cancer in 2006, she left Haugen money to create a foundation for animals. “It was her gift to me,” Haugen says. Haugen moved to Durango to be near her father and started her 501(c)(3) organization, which helps fund spaying and neutering, promotes humane education, and helps in animal-rescue efforts during national disasters. She learned of For Pets’ Sake, which helps companion animals in Montezuma and Dolores counties, and decided to help them out any way she could.

“For Pets’ Sake is the best organization I’ve ever worked with,” she says. “They have a very active board — these people aren’t just on the board for something to put on their résumé. I hold them up as an example for other organizations.”

Haugen starts taking the puppies out of their cages, one by one, holding and fondling them. The pups have been at the shelter about a week and a half, Collins says. They were in very poor condition when she found them, “nothing but skin and bones,” but they’re recuperating rapidly. Collins has been taking them outside for walks and trying to socialize them.

Collins’ job involves a lot of driving as she tries to collect strays on a reservation of 993 square miles. “I’m on call and I have to drive up from Shiprock,” she says. “And it’s a little hard to set a trap on one side of the reservation and then go check one on the other side. I tried to get George to hire another animal- control officer, but they don’t have the money.”

Collins also picks up pets and transports them to the clinic for people who want to have them fixed. She even drives to White Mesa, Utah, to collect animals on the Ute Mountain Ute reservation there.

“We have had really good support from the tribe, from George and Stephanie,” Williams says. “We couldn’t get these clinics to work without the animal-control department to bring the pets in.

“They have really been super cooperative. They have been trying to get a real physical shelter, too.”

Williams is easing the timid “Jungle Dog” out of his carrier. Jungle Dog seems skinny and droopy. Williams starts petting him, but the dog is quiet. He was scheduled to be neutered today, but it’s decided he isn’t in good enough shape, so Williams gives him food and water. He perks up and begins sniffing around the room.

Haugen is still playing with the pups. They are lively, wriggling bundles of energy. She calls the La Plata County animal shelter to see if they might take the dogs and try to get them adopted. The shelter agrees so long as the pups don’t have parvovirus, a contagious, deadly dog disease.

“They think there’s a lot of parvo on the reservation,” Haugen says. She says she’ll test one pup, paying for the test herself. It’s a simple procedure; we wait tensely for the results. After about 10 minutes, she gets them — negative.

The pets that have been brought in for the free spaying and neutering are recovering in their cages. One dog named Cupcake is tossing his cookies pretty regularly as a result of the anesthesia; Williams cleans it up.

The total number neutered today isn’t quite enough to make it worth Dr. Grabbe’s while to spend an entire day on the reservation, so Haugen and Williams decide to have the pups fixed as well. One by one they’re taken to the mobile clinic. Soon they’ll be on their way to Durango.

Williams brings out the shy gray-andbrown dog and begins feeding her treats by hand to get her used to people. Her long tail wags happily. “When I was here last time, you wouldn’t even let me talk to you,” he tells the dog.

“This is good to see,” Haugen says, “but then what do you do with her?” She christens the dog “Cheyenne.” We all wish we could keep her, but all of us have full complements of pets already.

Around mid-afternoon the clinic winds down. It’s agreed there will be another one in two weeks. Williams can’t be there but Haugen says she can manage with help from Collins.

So, two weeks later, I return rather apprehensively to see what has become of the strays. Grabbe is busy operating on the two cats and five dogs that have been slated for operations today. Grabbe, a new member of the For Pets’ Sake board, provides her services at a discount to help out the organization.

Haugen is pleased because someone has brought in a purebred Chihuahua for the free neutering. “It’s really cool when people bring in their purebreds to get them fixed,” she says.

Haugen and Collins are eating sugar cookies for breakfast and doing more paperwork. We show each other pictures of our pets on our cell phones and digital cameras, and they update me on the animals from two weeks ago.

Jungle Dog was taken to the Cortez Animal Shelter and adopted. The pups went to La Plata County. Williams is thinking of keeping Cheyenne. And the “mean” puppy that tried to bite Wells has become much friendlier and is able to be handled. A puppy-rescue place in Brighton, Colo., might take him.

But there’s a new batch of dogs to deal with. And the two affectionate cats are still in the shelter, still eagerly purring when they’re picked up. Their fate is uncertain; they’ve already been here a long time.

“Be sure to put in your article that there are some really nice animals to be adopted from Towaoc, and they’re spayed and neutered for free,” Haugen tells me.

I already know that. I adopted a rez cat last winter, a tuxedo with a torn-up tail that was rescued miraculously through Wells’ efforts. She’s one of the sweetest, funniest cats I’ve ever owned.

“And be sure to tell people to check off that box on their state income-tax form to give to the Colorado Pet Overpopulation Fund,” Haugen says as I start to head out.

Then she and Collins are back to work, cuddling puppies in between filling out forms.

“This is my favorite thing to do,” Haugen says. “I look forward to every single Thursday.”