She fought to practice medicine 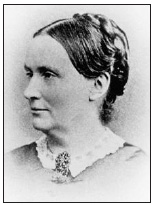 Hannah E. Myers was born to a Quaker family in Sandy Spring, Md., on May 30, 1819. She was the daughter of Samuel My­ers and Paulina Oden Myers and one of seven children.

When she was 14, the family moved to Ohio. Her father was a teacher at a Quaker School and the family espoused humani­tarianism and the equal education of boys and girls. They were also staunch abolition­ists, abhorring the use and mistreatment of slaves.

As a young girl, Hannah always loved science and closely examining small ani­mals and insects. She began to dream of a career in medicine. Of course, at this time in history it was an exceptional dream for a woman. Hannah studied for several years at New Lisbon Academy as her plan to en­ter Oberlin College to study medicine grew. Although her parents supported her com­pletely, those plans were delayed because of financial constraints.

In 1841, she married Thomas Ellwood Longshore, a teacher at New Lisbon Acade­my and a staunch supporter of social reform and women’s education. He also supported his wife’s plan to attend medical school. Her plans once again were put on hold with the birth of two children, Channing in 1842 and Lucretia in 1845. Shortly after Lucretia was born, Thomas lost his job due to his anti-slavery beliefs and the family moved back to his hometown of Attleboro, Pa.

Thomas soon found work at a local Quaker school. Hannah’s studies had been on hold for six years now. When Lucretia, her youngest, was 4, she began to study and serve as an apprentice to her brother-in-law, Joseph Skelton Long­shore, who was a ho­meopathic physician and shared his broth­er’s belief in educa­tion for women. Dr. Longshore encour­aged Hannah as well as his sister Anna to study his medical books and observe his work with patients.

To enhance their training, Dr. Longshore and other Pennsylvania Quakers established the Female Medical College of Pennsylva­nia in 1850. Hannah Longshore realized her dream of becoming a physician, enrolling in the college’s first class. She completed the training, along with her sister in law, Anna, and she received her M.D. in 1851. There were a total of eight women that year who earned their M.D. degree.

Two of her sisters, Jane Myers and Mary Frame Myers Thomas, were also physicians and graduated from Pennsylvania Medical University. Mary became a prominent physi­cian in Fort Wayne and Richmond, Ind. She was elected a member of the Wayne County Medical Society in 1875. She was president of the Indiana State Medical Society and worked with the Sanitary Commission dur­ing the Civil War. Mary was also a leader in the cause of prison reform, women’s suf­frage and operated a station on the Under­ground Railroad. Jane was also a renowned physician, suffragist, botanist and bo­tanical collector. Hannah’s daughter, Lucretia Mott Blan­kenburg, went on to become a proponent of public health measures in Philadelphia and active in women’s rights.

Dr. Hannah Longshore was one of the first women to hold a faculty position at an American medical school, where she taught anatomy. Eventually, she opened her own practice and was the first woman phy­sician to do so in Philadelphia in 1853. She met with much derision from the public and even from other physicians. Many doctors refused consultation with her and refused to fill her prescriptions. One actually advised her to “go home and darn your husband’s socks.” She resorted for a while to preparing her own medicines by hand.

She gave a series of public lectures on physiology and hygiene. Women’s rights leaders such encouraged her work. Dr. Hannah Longshore’s open and honest discussions of sexuality shocked conserva­tives, but won her praise by others as well as many pa­tients. At one point in her career she had around 300 families in her practice. This was a record met by few oth­er doctors in her day.