Shelter from the storm: Laurie Knutson discusses her final, pandemic-threatened year at the Bridge 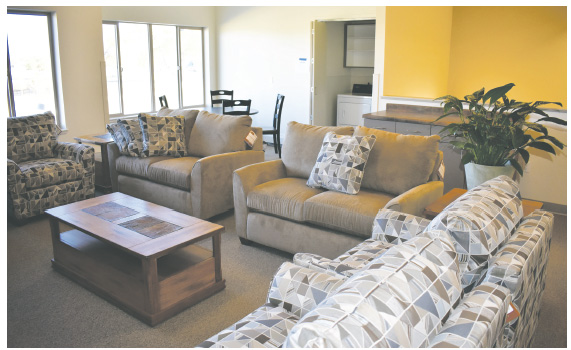 Despite the pandemic, which closed some shelters across Colorado, the Bridge in Cortez
managed to continue offering services in the facility it opened in 2019. Photo by Gail Binkly.

In 2019, when the Bridge Shelter opened the doors on its brand-new facility at 735 N. Park St. in Cortez, organizers anticipated it would continue providing shelter to people in need, as it had been doing since 2006, while also offering new transitional housing and operating the Day Labor Center. What they didn’t anticipate was a worldwide pandemic.

In the face of a virus that affects its victims very differently – some people not even knowing they have it, others becoming so ill they require hospitalization, while others are killed by it – how would it be possible for the Bridge to continue operating?

Yet somehow it did.

“This has been a strange year,” Executive Director Laurie Knutson told the Four Corners Free Press.

There were some shelters in the state that didn’t open this year. But although its Day Labor Center had to simply close down for the duration, the Bridge continued offering overnight housing during the traditional season, which is from mid-October to the end of April.

There had to be some definite adjustments. “We set up protocols to come in,” Knutson said. “People were symptom-checked in the evenings. A lot of the time we did daily thermometer checks, but that isn’t the most reliable test so I don’t think we kept that up.”

Every Tuesday night, EMS workers came over to do mandatory testing for COVID-19 as well.

And then there had to be restrictions because of lockdowns taking place in locations such as the Navajo Nation, where the pandemic was having a devastating impact.

“With the restrictions because of COVID and with the Navajo Nation wanting people to shelter in place, we have discouraged people from coming back and forth. They can’t come to town for a week, leave, go home, then come back. We told them, ‘We don’t want you bringing an infection here and we don’t want you taking infections from town going out.’

“So the people who aren’t social distancing, aren’t masking, aren’t able to come. The changes were driven by public safety for people in our building and our staff.

“I never really thought that in the two years we’ve been open in this location that at the end of one year we would have to put people in ‘shelter in place’.”

The Bridge continued to accept inebriated clients if they were willing to follow the rules – something that makes it unusual among shelters, many of which accept only sober clients.

However, the Bridge evolved out of an all-volunteer effort launched in Cortez in the late 1990s whose goal was to keep people, many of them drunk, from freezing to death in the city’s parks and open spaces. Over time the Bridge came to house a clientele that is mostly sober, but it still remains true to its original mission and will accept persons under the influence.

“We are not discouraging the inebriated,” Knutson said.

Despite all the risks posed by the coronavirus, the shelter managed to remain open and to keep its clients and staff fairly healthy. They did have three people who contracted the virus.

“One was in the shelter – she was quarantined,” Knutson said. “Another from an apartment in transitional living was quarantined, and a staff member got infected by someone showing up without a mask and screaming in their face. All of them recovered. No one was very symptomatic at all.”

In a couple of months, at the end of April, the shelter will close for the season. That will mark the end of Knutson’s eight-year tenure. In February, she announced her retirement.

“It’s been really an honor and a privilege to have this job at this organization’s time of history,” Knutson said. “There are not many EDs (executive directors) who get to oversee a new build, and that was huge because it set up new services for us.”

One major addition was offering transitional housing. Apartments are available on the shelter’s second floor for people who are ready to take steps toward obtaining their own housing out in the community.

“It’s been a treat to see how transitional housing has worked,” Knutson said. “Most on the second floor have succeeded. Some were asked to leave and some left because they were ready for community housing.

“People on the first floor ask, ‘What do I need to do to get up there?’ and they either meet expectations or they don’t.” There have been nationwide concerns about the pandemic’s effects on lower-income citizens, many of whom have faced job losses, a decline in income, and the possible loss of their homes. Moratoriums on evictions have helped people maintain places to stay, but Knutson worries about whether the future will bring a dramatic increase in homelessness.

“It hasn’t happened yet locally,” she said. “I am concerned that it will happen. Even if they extend the eviction moratoriums, it’s not forgiveness of rent, so when they have to pay the rent back there will be some huge bills and I don’t know what will happen at that point. There will be families and individual people involved and that will happen across the country.

“I don’t know what’s going to be seen in another six months. I am glad people have been able to not be evicted but they still have to pay and I don’t know how you dig out from nine months of rent.”

However, it takes a while to construct those buildings. “There’s such a long delay before people can move into them,” she said.

Knutson said the proposed hike in the federal minimum wage to $15 from its current level of $7.25 could help the working poor, but it could have unintended effects.

“Raising the minimum wage in and of itself solves some problems for people but it adds others. If you have been used to getting extended Medicaid, making more money may mean you have to spend thousands of dollars on marketplace health insurance, unless those two are tackled together.

“Similarly, your housing costs may increase if you’re in subsidized housing. If your other costs go up, how has your life improved except that eventually your Social Security will go up?”

Knutson said under the HUD Public Housing Program, if the minimum wage were increased to $15, “almost everybody in our apartments would be over income to stay here. Of the 18 people living upstairs, 11 are working and would have to pay a lot more rent or not be able to stay here at all.”

Another element is the fact that some states have minimum wages of their own that are above the federal minimum.

“ I think that workers should never be exploited so I support the overall increase, but it’s complicated. We’re at $12 minimum wage in Colorado, but there are places that are at the $7.25. You need to give Mississippi and Alabama a couple years to get up to $12.

If the minimum wage is increased, other changes need to be made in concert with that change, she said.

“If you could implement national health care and then raise the minimum wage that would be huge.”

Knutson said if she were 20 years younger she’d get a degree in public policy and work on such broader issues, but at 67 that isn’t an option for her. After the shelter closes at the end of April, she will “take a month to do nothing, then go on a road trip. I don’t know for sure where I’ll be or what I’ll be up to but I’m done with full- time working.” Knutson will be missed. She has drawn praise from a number of people for her work.

“Laurie has been amazing in her vision, compassion and leadership,” commented Donna Pharo of Cortez on Facebook in response to the announcement of Knutson’s retirement.

“She saved many lives!” wrote Beth Lamberson Warren of Durango,

“She will be missed. A terrific person.