Painter Becky Siefer wants viewers to interact with her mixed-media images. The Mancos-Dolores-area artist sees any picture she creates as half an equation. A beholder’s response makes up the other half. 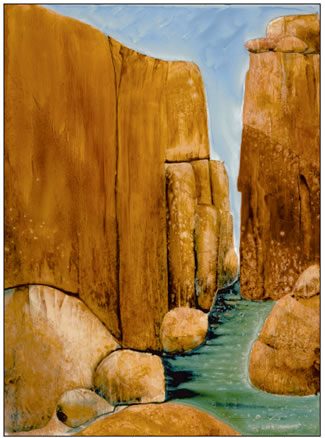 “Hayduke Narrow,” a mixed-media art work by Montezuma County’s Becky Seifer, will be on display beginning June 14 at the Framed Image Gallery in Moab, Utah.

So, her excitement whoops down the phone line as she anticipates the opening of her next show at The Framed Image Gallery in Moab, Utah, on June 14. During a gallery walk that evening, she plans to learn what sort of feelings her abstract-impressionist landscapes evoke in people who stroll into the shop.

“I’ve created a body of work just for the show, and it’s very Moabish,” she bubbles.

“Moabish” means large canvases that depict her thoughts about canyon walls, light spilling through apertures between boulders, rocks tumbling together, and the textures of the cliff sides she encounters when hiking just outside of town.

“When I’m walking, I’m always sort of painting pictures in my head. When I get back to the studio, I just paint from that experience.”

She begins a work with features of a landscape, then sometimes juxtaposes them in an atypical way. Heavy rocks appear at the top of an image. Sky lands at the bottom. Or is it sky? Maybe it’s water.

She doesn’t care. “I like some discord that makes you sort of look around the painting and resolve it.” The resolution does not have to come as landscape, but always arrives in design and balance.

She plays little tricks with color. Each piece for the show at The Framed Image Gallery contains a touch of pink pastel.

“It’s probably the only group of work that I’ll do with a little pink crayon line running through them,” she giggles.

Siefer has painted all her life, though she has taken few art classes, and makes her living as an occupational therapy consultant for the Dolores and Mancos public schools.

Her talent came from her maternal grandmother, Lillian, who never had time to pursue an art career herself, but always supported Becky in her desire to draw.

“She was the greatest,” reflects Siefer, whose middle name is Lillian, and who honors her grandmother in her web address www.rlillianstudio.com. 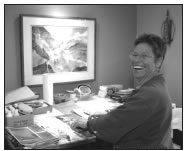 Becky Siefer at work in her studio near Dolores. Photo by Wendy Mimiaga.

Beginning her art career as a realistic painter and a stickler for detail, Siefer eventually worked into her present style. “So much in life is so regimented and structured and over-scheduled,” she explains. “The idea of sitting down and taking hours and hours to do a realistic representation of something just didn’t float my boat any more.”

To make herself loosen up, she began experimenting with watercolor and ink, as well as paper that didn’t soak up either medium well. Now as she works in her straw-bale studio next to her straw-bale house between Mancos and Dolores, ink and paint puddle on polymer film and tiger rag, which she describes as similar to the material Federal Express uses for mailers.

Incense or candles burn. Classical and world music play while she drops objects found on hikes into the streams: cardboard, feathers, wax paper. Big brushes extend her arm as she swirls color. She plunges fingers, palms, nails, and the heels of her hands into ink to get textures.

The ink feels like silky water but, “It’s embarrassing to go to work on Monday morning because my nails are such a mess.” The sentence ends in a laugh.

When a piece she’s been working on dries, Siefer pulls off the found objects and turns the image around and around to see what she might add next. “It’s kind of like unwrapping a package. I can paint for hours. I forget to eat.”

Only at the last stages of a work does she meticulously control her brush strokes. She has no official moment when she considers a piece finished. She just stops when she senses anything else would upset the design that she has developed.

Some images turn out beautifully. “And then I have a lot of that never see the light of day,” she chuckles. “[But] I learn something from every one.”

She doesn’t title her paintings. “I don’t want to imply to the viewer that they’re supposed to see a specific thing.”

If galleries want titles, she invites friends over for dinner and wine. They go into her studio and suggest names. There’s one rule: Titles can’t contain the words “rock,” “water,” or “canyon.”

During the naming of images for the show at The Framed Image Gallery, one woman looked at a canyon with a storm blowing in and suggested calling it “Roar.”

Immediately intrigued, Siefer asked where the title came from. Her friend described being in the Goosenecks on a rafting trip when a storm thundered through.

Siefer grows excited. “The fun is to know that [a painting] has a meaningfulness that was intended, but not fully directed by me.”

Her exhibit in Moab will hang through the middle of July. Besides showing there, she has hung work at the Durango Art Center, and in the Piñon Arts and Humanities Juried Fine Art Show in Cortez.

Would she like to quit being an occupational therapist and pursue art full time? The question brings a final guffaw. “I’m a long way from being a professional artist. I love what I do. Perfection would be a marriage of the two.”