Cortez’s Southwest Open Charter School is coming apart at the seams – literally. At least two of the scattered modular buildings that comprise the 176-student alternative high school, known as SWOS, show gaps along their central seams.

“We try to keep carpet over them, but you can see the gap right here,” said SWOS Director Judy Hite on a recent tour of the campus, located at 401 N. Dolores Road on the city’s eastern edge. 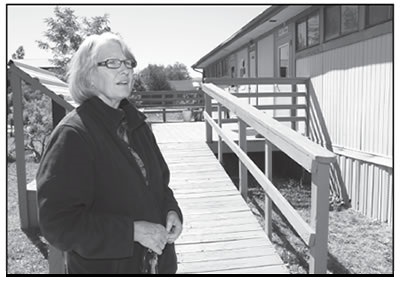 Southwest Open Charter School Director Judy Hite takes visitors on a tour of the campus, which consists of modular, pre-fab buildings dating back to 1973. The school has received a $7.4 million state grant for a revamp, but it is contingent on a bond proposal passing Nov. 1. Photo by Wendy Mimiaga

Some of the school’s prefab buildings date back to 1973. One double-wide has a hole in the skirting and is splitting at the top as well as along the floor seam. The ceiling was slowly collapsing, so new boards had to be nailed in.

“We put metal on most of the roofs, but you can only do so much when they start splitting,” Hite said. “It’s not like we haven’t tried to keep them repaired.”

Most of the buildings leak, she said, and in two or three, water drips through the light fixtures when it rains. For obvious safety reasons, the lights have to be turned off at those times.

Some rooms smell because of moisture and the occasional animal carcass trapped beneath the structure. “In my office you can see mold everywhere, all over the ceiling,” Hite said.

Faulty electrical wiring has sparked a couple of small fires.

There is no running water in any of the classrooms. There are bathrooms in just two buildings.

A yurt, built a dozen years ago, serves as an art space. “It’s not the safest building, obviously,” she said.

And the heating system is outdated. “The furnaces are so old you can’t get parts for them,” Hite added. “And you don’t want to put a $5,000 heat system on a piece of junk.”

Hite said there is no sense of permanence to the campus.

“When I first came here I had nightmares about coming to school and finding everything gone. I realized it’s because nothing here has a foundation.”

But there may be a light at the end of the tunnel. This summer, SWOS received a $7.4 million grant from the Colorado Department of Education’s Building Excellent Schools Today program.

One of the chosen few

The BEST grants are extremely competitive and difficult to get, as there are always far more requests than money to fill them.

This year, 11 lease-purchase grants for major construction were awarded, along with 25 cash grants for smaller projects. The group awarded $142 million in state funds, but a total of $372 million had been requested by the more than 70 applicants.

At the several-day meeting of the state Capital Construction Assistance Board in Denver in June, the board originally put the SWOS request at No. 12 on its list, meaning it would not have received one of the 11 grants. At the last minute, one of those was switched to a cash grant, Hite said, and SWOS made the cut.

District Re-1 had sought a $39 million grant at the same time to do major renovations to several of its schools, but this proposal was rejected.

The catch for SWOS is that the school must obtain $3.4 million in matching funds. If it fails to do so, five alternates were named for the grants.

SWOS received approval from the district school board to put a question on the Nov. 1 ballot seeking voter approval of the $3.4 million bond to go with the BEST grant, which would be repaid over a maximum of 20 years. It would increase the local mill levy by 0.521 mills and would add approximately $4.15 to the annual property tax on a $100,000 home.

If the measure passes, SWOS will launch a $10.5 million revamp of the campus, replacing all the temporary buildings with eight stick-built, permanent quads. The total square footage of the buildings would go from 11,000 to 37,000, most of that coming from a multi-purpose gymnasium that could be used by the community afterhours. “I believe in using buildings 24/7,” Hite said. The school currently has no gym or recreational facilities.

SWOS began in 1986 as a place where teen parents and drop-outs could receive an education.

“Unfortunately, it’s kept that reputation,” Hite said. “But maybe that’s good in a way. Sometimes I say we’re the best-kept secrets in Montezuma County. Parents say, ‘My kid is getting me up and wanting to come to school. He never did that before.’”

Today, any student who asks to come to SWOS will be accepted, as long as there is room. The school takes students who have been expelled from Montezuma-Cortez High School along with others who just feel out of place at MCHS or are having a difficult time there.

At SWOS they receive a more-flexible, hands-on, exploration-based learning experience, but one that still meets all state curriculum requirements and offers a traditional high-school diploma.

“It’s not just somebody telling them what to do, it’s somebody showing them,” Hite said.

Kids feel safe at SWOS, she said. “They don’t have to watch their back. If you fight here, you’re gone forever, expelled. And students say we don’t have cliques. People hang out together but you move from group to group, that’s what the kids say.”

When they first arrive at the school students must take a course called “SWOS-ology,” which includes sections on anger management, team-building, conflict resolution and self-advocacy.

“The kids take responsibility for their own behavior and their own learning,” said Hite. “We’re totally getting them ready for the real world. When they leave here, they should be ready to deal with anything that comes in life.

The students already give back to the community through an after-school philanthropy course in which they raise money and donate it to such groups as the Bridge Emergency Shelter, Cortez Animal Shelter and Make-a- Wish Foundation out of Colorado Springs. The class has raised and distributed almost $40,000 over six years, Hite said.

The school’s students and staff are used to finding creative ways to get by with very little.

When students wanted more shade on the largely tree-less campus, they constructed benches and small shade structures themselves.

“We never have any graffiti,” she said. “Our kids are so respectful of our school. Our kids really monitor each other.”

The school started with two small buildings and has grown by bits and pieces. When one old trailer was scorched by a fire several years ago, it was salvaged and turned into an equipment shed, but the school needed another building.

The triple-wide had been used during construction of the Animas-La Plata Project and was in three pieces in the middle of a field. She was dismayed, but talked the owner into selling it for a small sum. SWOS found a base for it and two of the school’s staff members remodeled it. “Now it’s nice and we’re going to keep it,” she said.

When she first came to SWOS, the kids were eating lunch outside, even in the winter. Now hot lunches are brought in from Manaugh Elementary and served indoors. Hite hopes to be able to have lunches cooked on-site in the new facilities.

One building known as La Casa, which was an on-site day-care facility for 19 years until that program had to be shut down, was constructed by students at the San Juan Vocational Technical School. It now houses a small health clinic that serves all the Re-1 schools, attended by two nurse practitioners, where students can be examined for minor ailments, even tested for things such as strep throat. Courses are offered in health topics such as substance abuse. “It takes seven grants to keep this going,” Hite said.

Hite believes the time is right for the campus to be expanded and improved. Interest rates are at all-time lows, enabling the bond to be paid off cheaply, and the BEST grant offers a rare opportunity to have most of the improvements paid by the state.

“We can reapply but there is no guarantee we could get it again,” she said.

The BEST program, which is funded by school trust lands and lottery revenues, reportedly will be giving substantial grants for only another year or two. After that most of the BEST monies will have to be allocated to paying off previously approved projects, according to Education News Colorado.